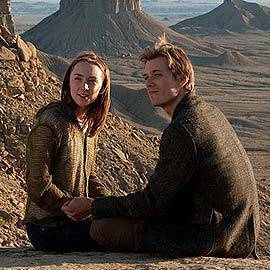 How does a Sci-Fi movie conceived by <em> Twilight </em> creator Stephenie Meyer sound like to you?

(SPOT.ph) Twilight creator Stephenie Meyer goes Twilight Zone in this futuristic sci-fi romance about alien "souls" who invade Earth and take over the bodies of human beings,  deleting their memories and killing them. Normally, the invaders have no problem taking over the bodies of the human hosts, but that's not the case with Melanie Stryder (Saoirse Ronan), who puts up a valiant mind-over-matter struggle when a benign alien named Wanderer enters her body. The tug-o-war between Wanderer and Melanie for possession of Melanie's mind comes to the attention of The Seeker (Diane Kruger), another body snatcher who sees in Melanie's predicament a way to locate a group of humans who have been hiding from the invaders. Among the rebels Melanie will risk everything to protect are her younger brother Jamie (Chandler Canterbury), her Uncle Jeb (William Hurt), and boyfriend Jared (Max Irons).

The intriguing plot and the conclusion. Not having read the Stephenie Meyer novel on which this adaptation is based, I admit I was immediately hooked by the story and kept wondering how it would end. And though unexpected, the twist ending was marred somewhat by the foolishness of two guys sporting shades at night (That's NOT a spoiler). 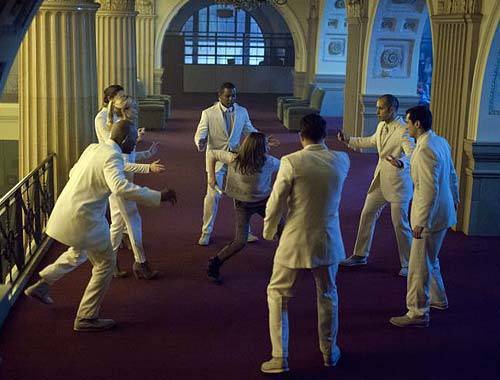 
The Melanie-Wanderer "dialogue." When an Oscar-nominated teen actress like Saoirse Ronan (Atonement) is given a role that allows her to play two characters occupying one body, you'd probably expect a flashy, schizo performance on the level of Jekyll-Hyde or even Smeagol-Gollum. Sadly, Ronan isn't given the opportunity to create a complex, dual-layered performance in The Host for two reasons. First, the two characters she's playing simultaneously- Melanie and the Wanderer (aka Wanda)- aren't that much different from one another. One is good, the other is "gooder."

This being a story conceived by Twilight creator Stephenie Meyer, the only thing that really distinguishes them is that Melanie likes Jared (Max Irons) while Wanda is in love with Jared's best friend, Ian (Jake Abel). Second, director Andrew Niccol has made the creatively bland decision to allow Melanie's consciousness to manifest itself while she's hosting Wanda's mind only through her voice, which is the same voice Wanda uses. And so, when Melanie and Wanda are arguing about which of the two boys Melanie's physical form can kiss, for example, we see and hear Saoirse Ronan as Wanda, but only hear Melanie's arguments as a voice in Wanda's head. Not very cinematic, is it? My irritation with this technique made me wish that there was at least one moment in the movie where Melanie and Wanda would dialogue with one another using a reflective surface like a mirror or a pond, the way Smeagol-Gollum did in The Two Towers. 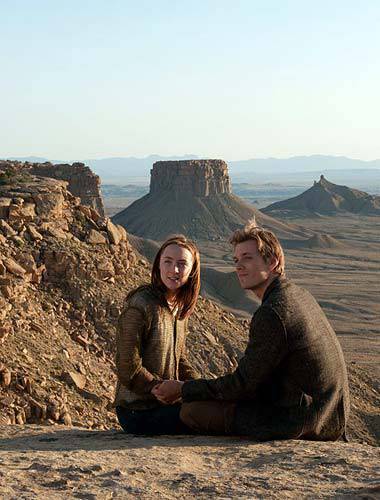 The corny dialogue. Any one of Star Cinema's kilig movie blockbusters has more quotable lines than the cornball exchanges found in The Host, which seem to have been stitched together from the sappy sentences found in the works of Nicholas Sparks and, of course, Stephenie Meyer. Some lines don't even make any dramatic sense. In one scene, for example, Wanda acts like she's never seen the sky, even though she spent a day walking in a Utah desert under the scorching sun earlier in the film. As for Melanie and Wanda sharing Melanie's body, we suddenly find out near the end that Melanie has the power to switch off her connection to Wanda by going into "another room."

The tiring, tiresome scenery. The Host has to be the dullest, cheapest-looking science fiction flick made in recent years. Its producers seem oblivious to the fact that it's tradition for movies in the genre to constantly bombard viewers with sights unseen. Yes, those majestic rock formations rising above the Utah desert were wonderful to behold at first, but they lost their ability to inspire awe after a few seconds. Ditto for the magic mirror and the glow worm cave, which wore out their welcome right after their respective introductions. 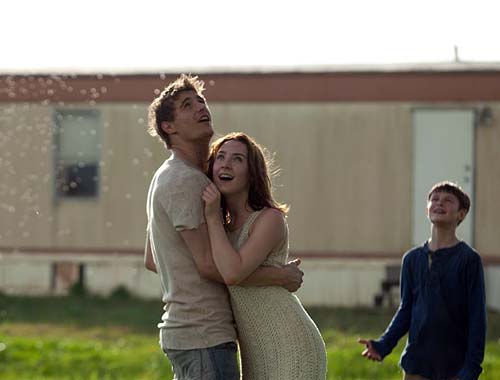 The languid pacing. At 125 minutes, The Host is 30 minutes too long for its own good. As the movie crawled towards the finish line and the end seemed in sight, a card appeared saying "Months Later," signaling that it wasn't quite the end. If the movie was any good, I would have welcomed the coda. But The Host isn't a good movie, so the card made me roll my eyes and check my watch. It didn't help that director Andrew Niccol padded the running time with interminable dialogue scenes, while being unfairly brief with the action and chase scenes. It didn't help either that most of the characters- especially the bad guys- delivered their lines using flat, near-monotone voices to denote how reasonable and rational the aliens are compared to the emotional, passionate human beings they are trying to dominate.

IN BRIEF: Long on clichéd dialogue but short on visual pleasures, The Host serves up science fiction that doesn't engage the mind, and romance that doesn't stir the heart.

Movie Review Thehost Pauldaza
Your Guide to Thriving in This Strange New World
Staying
In? What to watch, what to eat, and where to shop from home
OR
Heading
Out? What you need to know to stay safe when heading out