Heart Evangelista appears on the cover of Esquire; Magazine finally releases OFFICIAL cover
Loading
Already a member? Log in
No account yet? Create Account
Spot.ph is your one-stop urban lifestyle guide to the best of Manila. 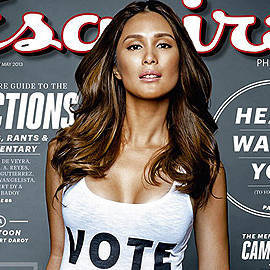 The men’s magazine presents the face of election fever. 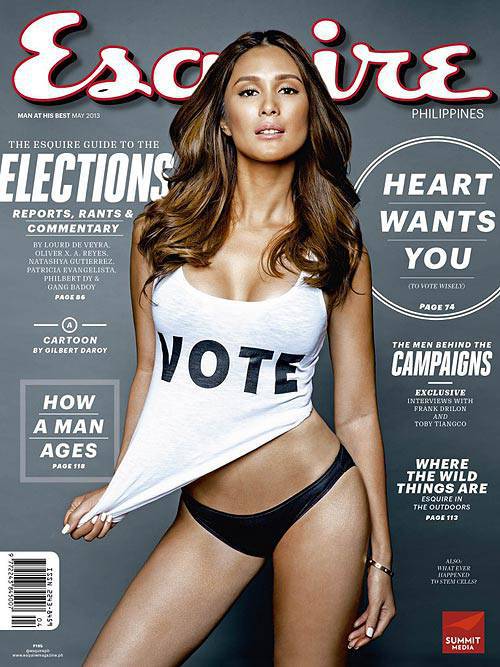 (SPOT.ph) The image you see above is the official May 2013 cover of Esquire Philippines. It’s the Elections Issue- and who better to put on the cover than the girlfriend of reelectionist Senator Chiz Escudero? It’s only apt that it’s controversial actress Heart Evangelista striking a provocative pose, while wearing a statement shirt that reads, "Vote." "We really wanted to put Heart on the cover long before the big presscon [of her parents]. We thought she was the perfect Esquire cover girl," Esquire EIC Erwin Romulo tells SPOT.ph.

"May is our Elections Issue so we thought she’ be a good muse for the elections," continues Jerome Gomez, senior writer of Esquire. Gomez also produced Heart’s cover shoot. In fact, he reveals that the Esquire team decided on tapping the Kapuso star in February. They even had two sets of numbers to call, Heart’s mother and Viva Entertainment, Heart’s agency. "But when the controversy erupted, I decided to book the actress through Viva," Gomez explained.

Esquire then presented the actress with a mood board, so come shoot day, everything went smoothly. "She was very nice," says Romulo of the actress. "She’s very easy to work with, very relaxed." The only thing the actress was particular about was the make-up, Gomez says. The cover was shot was done by BJ Pascual and styled by Raymond Gutierrez. Make-up artist Denise Go, completed the team.

It is a strong cover for the strong issue, which features essays by Lourd de Veyra, Gang Badoy, Natashya Gutierrez, and Patricia Evangelista.

Esquire is now available in all bookstores and newsstands. Grab a copy now.

Esquire Heartevangelista Erwinromulo Jeromegomez
Your Guide to Thriving in This Strange New World
Staying
In? What to watch, what to eat, and where to shop from home
OR
Heading
Out? What you need to know to stay safe when heading out