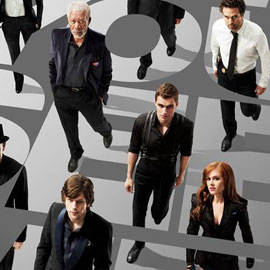 MOVIE REVIEW: Now You See Me

<em> Now You See Me </em>is a movie about illusions and magic. Could its stellar cast be the most magical thing about it?

(SPOT.ph) A year ago, four magicians (played by Jesse Eisenberg, Isla Fisher, Woody Harrelson, and Dave Franco) were invited to a presentation by the mysterious Eye. Now, a year later, the quartet has become famous in Las Vegas as the Four Horsemen. Their specialty? Stealing millions from banks during their live shows and giving the money to the audience before the curtain falls. Trying to catch these magical Robin Hoods are FBI agent Dylan Rhodes (Mark Ruffalo) and French Interpol investigator Alma Dray (Melanie Laurent). Also aiding them in nailing the Four Horsemen is magic debunker Thaddeus Bradley (Morgan Freeman), who has made a fortune selling dvds that reveal the tricks behind every illusionist's trade.

The casting. With all the starpower in its 115 minutes, arranging the names on the Now You See Me poster must have been a billing nightmare. There's Oscar nominee Jesse Eisenberg as a card guesser who employs building facades to dazzle his audience, and Oscar nominee Woody Harrelson as a mind-reader who uses his talent to blackmail a philandering husband. There's also the real life Mrs. Sacha Baron Cohen, Isla Fisher, as a female Houdini who uses man-eating piranha in her escape act, and James Franco's younger and better-looking brother Dave as a pickpocket of exceptional skill. And that's just the Four Horsemen. Playing the cat out to nab the four mice is Oscar nominee Mark Ruffalo as an FBI man who's smarter than he lets on, and Oscar winner Morgan Freeman as a magic debunker who's not as smart as he thinks he is. Also on board is Freeman's fellow Dark Knight alumnus, Oscar winner Michael Caine, as the wealthy producer who bankrolls the Four Horsemen. 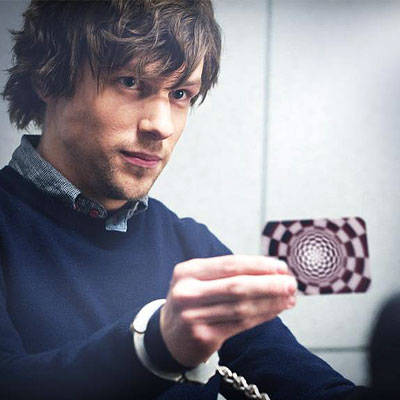 The Las Vegas, New Orleans, and New York appearances of the Four Horsemen. The best scenes in Now You See Me are those that show the magical quartet in action, stupefying their audience with their jaw-dropping tricks that inevitably end in a shower of dollars and euros.

The intriguing premise. What if magicians who are masters of escape, illusion, mind-reading, and pickpocketing teamed up and used their skills to steal from the wealthy and give to the 99%? As Now You See Me unfolded before my eyes, I was electrified by the hope that the film would be a magnificent brain twister a la Inception. (After a captivating start, however, Now You See Me's cracks began to show...)

The obvious use of CGI. As fun to behold as they are, the magic show sequences share a major flaw: they were all enhanced by computer-generated imagery. The Las Vegas setpiece, for example, uses visual effects in shots depicting a large piece of flying cloth and another one showing metal planks clamping down on a volunteer from the audience. As for the New York showstopper, look no further than the shot where the magicians are transformed into dollar bills as they jump off a roof. The best magic makes you scratch your head and wonder, how'd they do that? To this day, for instance, I don't know how David Copperfield made the Statue of Liberty disappear or how he walked through the Great Wall of China. By contrast, the magic scenes in Now You See Me never make you wonder how they were achieved, because we know that they're simply the result of editing and computer-enhanced movie magic. And movie magic never trumps the kind of "real" magic that David Copperfield wowed us with in decades past. 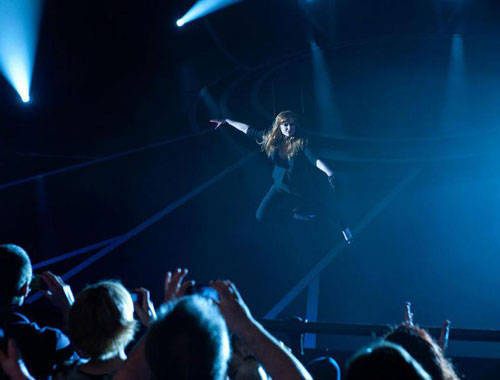 The schizophrenic tone. Now You See Me is an uneasy mix of two genres. On one hand are the fantastic feats of magic like the aforementioned sight of people being transformed into hundreds of dollar bills, a shot that wouldn't have been out of place in a Harry Potter movie. On the other hand is the FBI investigation aspect of the plot, which grounds the movie in reality. Morgan Freeman's character is even around to give plausible explanations as to how the Four Horsemen instantly teleported a man from their Las Vegas show to a bank vault in Paris, and how they made off with a heavily-guarded safe. So is this movie a Harry Potter-esque fantasy or a reality-based crime thriller? Now You See Me tries to be both and fails on both counts simply because the two genres make opposing demands on our desire to willingly suspend disbelief.

The preposterous revelation. Any problems one has with Now You See Me might have been forgiven if the scriptwriters had bowled us over with an elegant, satisfactory ending that made sense. But no such luck. The big reveal at the end of the film--which tells us who created the Four Horsemen, not to mention his/her motive for creating the quartet--is just plain ludicrous. And given the headache-inducing speed at which the revelation is made in the movie, it's obvious that the filmmakers are hoping that those who feel like they missed something will watch the movie again to see if the reveal makes sense. Not me, though. I don't believe repeat viewings are going to change my opinion about the baffling ending.

IN BRIEF: Now You See Me could have done for magic what Inception did for dreams, but the filmmakers waste a terrific cast with schizophrenic storytelling and a ridiculous revelation at the end.

Paul Daza Moviereviews Nowyouseeme
Your Guide to Thriving in This Strange New World
Staying
In? What to watch, what to eat, and where to shop from home
OR
Heading
Out? What you need to know to stay safe when heading out