Robbie Antonio featured in Vanity Fair, set to construct "a museum of him"
Loading
Already a member? Log in
No account yet? Create Account
Spot.ph is your one-stop urban lifestyle guide to the best of Manila.

Robbie Antonio featured in Vanity Fair, set to construct "a museum of him"

Robbie Antonio featured in Vanity Fair, set to construct "a museum of him" 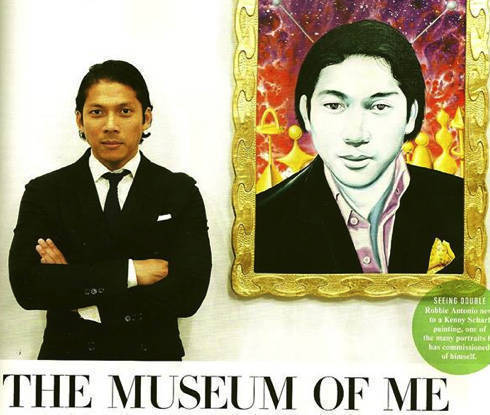 In the July 2013 issue of Vanity Fair, Robbie Antonio outdoes Beyoncé. The singer made headlines thanks to a GQ February 2013 feature that revealead that she has a room dedicated to herself-pictures, video footage, etc.-that the press dubbed "a museum." Antonio will do that term justice by having not just a room full of his own images, but an entire house dedicated to his profile.

For the unfamiliar, Antonio is a 36-year-old avid art collector and real estate developer. He is attempting to marry the two by teaming up with Rem Koolhaas, a world-famous Dutch architect who was in Time’s Most Influential People List in 2008. This project, which involves constructing Antonio’s "Museum of Me," will be the latest in only a handful of Koolhaas’ residential commissions, the last of which, Maison á Bordeaux, was completed in 1998.

The "museum" will include "a series of portraits of himself by some of the world’s top contemporary artists, including Julian Schnabel, Marilyn Minter, David Salle, Zhang Huan, members of the Bruce High Quality Foundation, and Takashi Murakami."

The feature reports that a dozen pieces of artwork have been completed, with Antonio spending about $3 million on that alone. He is aiming for 35.

Antonio is also featured in Town & Country Philippines’ "Top Bachelors Around The World" list in its June 2013 issue.

Vanity Fair Gq Beyonce Robbieantonio
Your Guide to Thriving in This Strange New World
Staying
In? What to watch, what to eat, and where to shop from home
OR
Heading
Out? What you need to know to stay safe when heading out