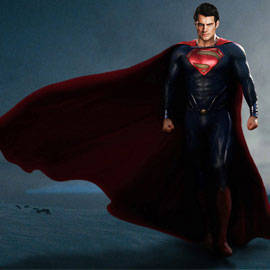 Is the new movie Superman worth the reboot?

by Paul Daza
Jun 15, 2013
Shares
Share Tweet Pin
Share
Pin
Tweet
Viber
Copy Link
(SPOT.ph) On the doomed planet Krypton, scientist Jorl-El (Russell Crowe) and wife Lara Lor-Van (Ayelet Zurer) manage to send their infant son to Earth in a space ship just before their world is destroyed. Many years later, the baby raised by Kansas couple Jonathan Kent (Kevin Costner) and wife Martha (Diane Lane) grows up to be Clark Kent (Henry Cavill), a young man who is terrified by the super powers he manifests as he gets older. Clark's search for answers about who he is puts him on a collision course with fellow Krypton survivor General Zod (Michael Shannon), who shows up on Earth one day to take back from Clark an object that will assure the continuation of the Kryptonian race. Soon, an epic battle between the two supermen ensues. 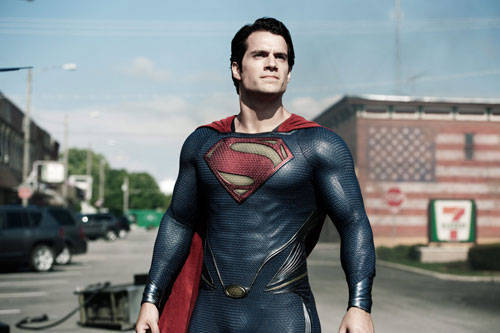 The expansion of Krypton.

Man of Steel forgoes the crystalline purity designed by John Barry for Richard Donner's 1978 classic film for a look that's both beautiful and scary, lyrical and threatening. Man of Steel also shows us a lot more of Krypton than ever before, lifting us into its apocalyptically threatening skies and plunging us into its turbulent waters. David Goyer's script also makes the Kryptonians themselves more complex than ever before. Not only do they "engineer" all their babies a la The Matrix, but their greed is also what leads to their planet's destruction a la An Inconvenient Truth.

The portrayal of small-town, middle America. As Clark Kent wanders from state to state like Bill Bixby did in the 1977-1982 Incredible Hulk TV series, we see aspects of American life we don't normally see in the superhero genre, including life onboard a fishing boat and an oil rig. Yes, there's also lots of gorgeous scenery, but they come with an edge that Donner's sentimental portrayal of Clark's boyhood in Smallville didn't have. In Snyder's reboot, the poetic sights of Kansas farmlands and snow-capped mountains are coupled with dangers that range from a posse of bullies to  savage killer tornadoes.

The soul-stirring music. Man of Steel is the first movie I've seen in many months that had me humming its theme repeatedly after the movie was over. And I'm not talking about the majestic, terrific theme that's played to heighten the impact of Superman's super feats. What gave me LSS was the pensive piano tune that Hans Zimmer composed for the film's quieter, more meditative moments.

The kick-ass visual effects. What else can I say? When the names of the visual effects artists appeared in the end credits, I wanted to stand up and cheer to thank them for their astonishing work. The scene where Superman first flies is seamless, and it's an inspired touch to have him get blurry from time to time as he flies over mountains and desertscapes and into the clouds. It gives the impression that he's moving so fast that  even a seasoned cameraman can't keep him in focus.
Ditto for the fight scenes, where you can feel the savage force behind every Kryptonian punch. Such was the brutal but bloodless "realism" of the fight between Zod and Superman in Man of Steel that the equivalent one in Superman II looked like it was filmed in slow-motion by comparison. And speaking of slow-motion, props to Man of Steel director Zack Snyder for sparing us from the "speed ramping" technique he made famous in 300, and which he's used in all his subsequent films before Man of Steel. By not slowing the action down or speeding it up here, we get to see how strong and how fast Superman "truly" is with our unaided eyes. 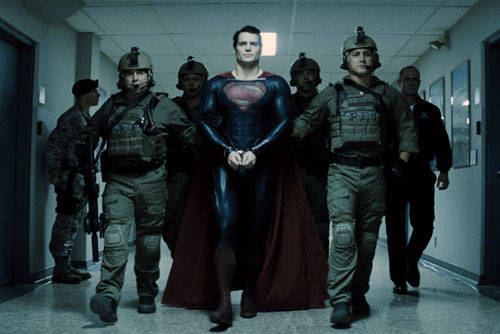 If this pic doesn’t say "Serious Superman", we don’t know what will

MINUSES
The super serious tone. With its relentless humorlessness, it would certainly have been appropriate for Man of Steel to recycle the "Why so serious?" tagline of The Dark Knight. There are only three instances in the 143-minute super flick that are meant to make viewers laugh, and two of them were already spoiled in the trailers.

Ayelet Zurer as Lara. In Les Miserables, Russell Crowe stood out like a sore thumb because his singing wasn't up to par with his fellow actor-singers. Now, it's the woman who plays Crowe's Kryptonian wife who stands out for all the wrong reasons. As Jor El's wife Lara, actress Ayelet Zurer is unforgivably bad. Her awkward work is in stark contrast to the affecting performances of Crowe, Kevin Costner, Diane Lane, and Henry Cavill. Most familiar to local audiences as particle physicist Vittoria Vetra in the film version of Dan Brown's Angels and Demons (where she was good as Tom Hanks' leading lady),  Zurer is simply awful as baby Kal El's mom. Good thing she's never seen again after Krypton is destroyed.

The last scene. The movie's last minute strikes me as being a can of worms that will be problematic in the sequels that are sure to follow. It's a far-reaching detail that appears not to have been as well thought out as the other story ingredients that scriptwriter David Goyer re-engineered for this reboot.

IN BRIEF: With its unusual combo of poetic lyricism, wall to wall spectacle, and knockout action, Man of Steel is one of the most startlingly original superhero flicks ever made. Superman has finally returned with a cinematic vengeance.

Man Of Steel Review Pauldaza Henrycavill Supermanmoviereview
Your Guide to Thriving in This Strange New World
Staying
In? What to watch, what to eat, and where to shop from home
OR
Heading
Out? What you need to know to stay safe when heading out