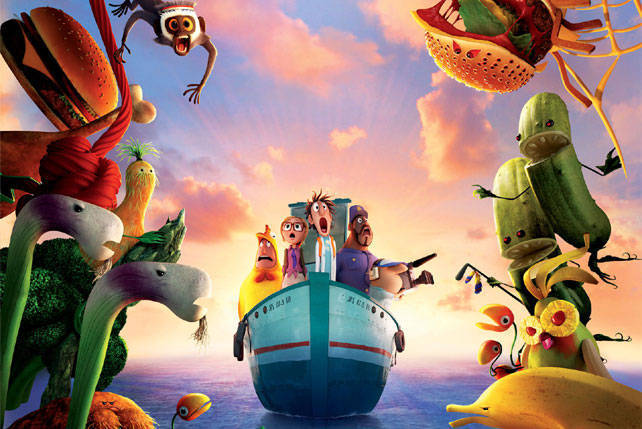 MOVIE REVIEW: Cloudy With a Chance of Meatballs 2

Cloudy With a Chance of Meatballs returns with a menagerie of outrageous "foodimals."

STORY: In this computer-animated sequel to the 2009 hit flick, inventor Flint Lockwood (voice of Bill Hader) finds out that the food-maker he invented and purportedly destroyed in the first film's events is still working. Now, however, the foods have mutated into living "foodimals" like giant tacodiles, fearsome watermelophants, and creepy cheespiders. Together with his posse of pals-weather girl Sam Sparks (Anna Faris), ex-cop Earl (Terry Crews), and soft-spoken dad Tim (James Caan)-Flint and a crew from tech giant Live Corp return to Swallow Falls in an attempt to save the town from the gastronomic madness that’s devouring it. Unknown to Flint, however, Live Corp’s greedy owner-his childhood idol Chester V (Will Forte)-has a more sinister item on his agenda. 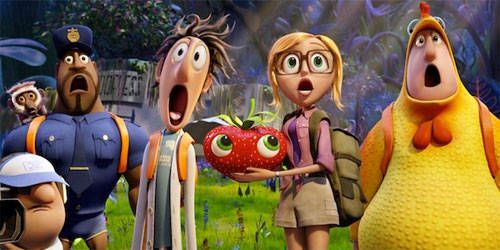 The stunning art direction and production design. With the help of a supremely gifted design team, Cloudy 2 directors Cody Cameron and Kris Pearn take the word "stylized" to dazzling new heights in the creation of such locales as the charming bay area city of San Franjose, the futuristic splendor of Live Corp's high-tech offices, and the food-gone-amuck "terror" of Swallow Falls. So detailed and dreamily visualized are these three fantasy places that each one of them could serve as the sole backdrop for an entire movie. And these locations don't just look great, they're "lit" exquisitely as well, with a few precious shots exuding a magical, Christmassy glow.

The bizarrely funny and inventive "foodimals." Mosquitoasts, flamangoes, hippotatomuses, shrimpanzees and more-these are just some of the colorful creatures that have run amok and turned Swallow Falls into a kind of gastronomic Jurassic Park. But unlike the famed, genetically-engineered dinosaurs of that tale, it's unlikely that the foodimals of Cloudy With A Chance of Meatballs 2 will end up in the nightmares of children. Though the movie’s middle section is an ode to Jurassic Park, the creatures which Flint and his friends encounter on their adventure are just so over-the-top delightful and mouth-watering, it’s unlikely that any of them-not even the fearsome, lettuce-spitting Tacodile Supreme-will end up evoking the slightest bit of terror in any young viewer. 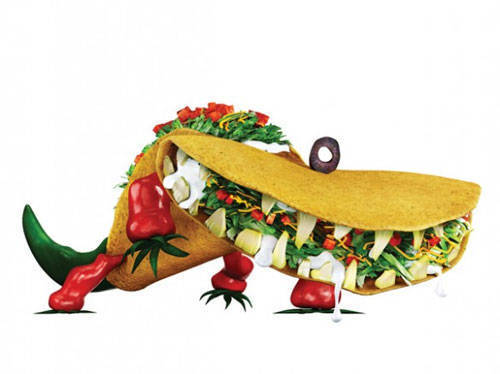 The underused returning characters. Bill Hader as hyper-inventor Flint. Benjamin Bratt as the multi-talented Manny. Neil Patrick Harris as the fun-loving monkey, Steve. James Caan as Flint's man-of-few-words dad Tim. Anna Faris as perky weathergirl Sam Sparks. Talented as these actors are, Cloudy 2 wastes them by not giving them quotable quotes or vital roles to play in the predictable, formulaic plot. The one good line in the film, which has to do with a man refusing to cry, is given to Terry Crews as super serious cop Earl. That's one hilarious one-liner in the 90-minute film. By contrast, Earl was voiced by Mr. T in the first film and he made me chuckle repeatedly by merely saying "Flint Lockwood" in his distinct way or talking about his tingling chest hairs.

The forgettable new characters. In Cloudy 2, we meet Flint's boyhood idol, scientist/philanthropist Chester V (voiced by Will Forte), and Chester's talking orangutan assistant Barb (voiced by Kristen Schaal). From his first appearance on TV as the educator who inspires the young Flint to become a scientist, the Chester V character is an attention-grabber. He becomes even more intriguing when the story moves to the present day, and he’s portrayed as the ruler of a tech empire that shares quite a few similarities with Google. Bad scripting, however, results in the character actually becoming less interesting the more he says and does. Ditto for Chester V's assistant, Barb, an orangutan who wants to be respected because she's super smart and can talk. She won’t tolerate being called a monkey, because she’s an ape. This conceit-an ape (who wears lipstick!) that wants to be treated like a human being-could have been a goldmine for laughs. But the film’s writers drop the ball with Barb as they do with her boss Chester, serving up a script that smacks more of missed comedic opportunities than it does with gags and punchlines that actually work.

IN BRIEF: Though this sequel’s sumptuous locations and fantastic foodimals trump its predecessor’s visual appeal on nearly every level, Cloudy With a Chance of Meatballs 2’s underutilized characters and subpar scripting prevent this sequel from outshining the original. If you loved the first movie, you’ll probably just like this one.

3d Animation Annafaris Benjaminbratt Billhader Cloudywithachanceofmeatballs2 Foodimals Jamescaan Neilpatrickharris Sequel Terrycrews Willforte
Your Guide to Thriving in This Strange New World
Staying
In? What to watch, what to eat, and where to shop from home
OR
Heading
Out? What you need to know to stay safe when heading out