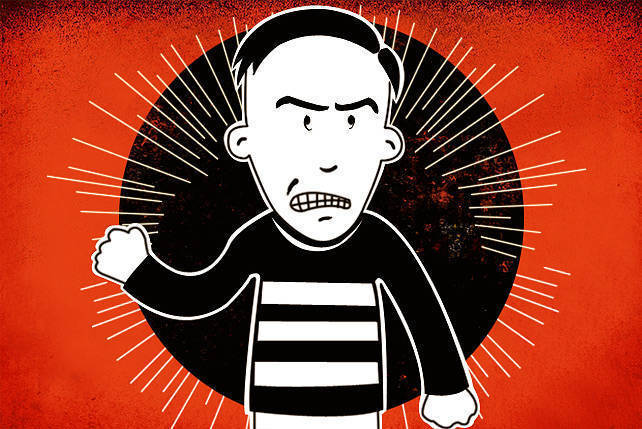 Feel free to share with us your own #ManilaProblems!

(SPOT.ph) We know about your bathroom habits via Twitter. We hear your vague passive-aggressive pasaring to some guy who made a pass at you while you were walking down the street (nakakalalake yun, chong) and you know what, that’s great. Not only do we feel needlessly close to you and you and especially you, we’re sure that somewhere out there, there is a metaphor that Twitter or Facebook has replaced the sari-sari store at the corner where people gather to hang out and vent about their problems. We’ll say it again: nothing unites like a common enemy.

Grab a chair (unless you’re already sitting in one, in which case, good on you) and let’s gather around and share our #ManilaProblems!

Note: We’ll save you the trouble of pointing out that some of them are general city problems. 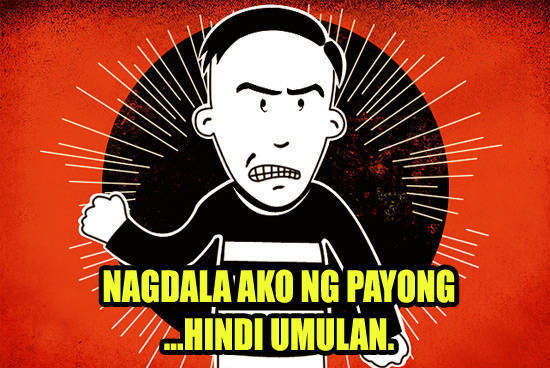 1. You’re all bundled up, thinking that it will rain, but it never does. Or conversely, you’re nearly nude because it’s so hot and then it starts raining. 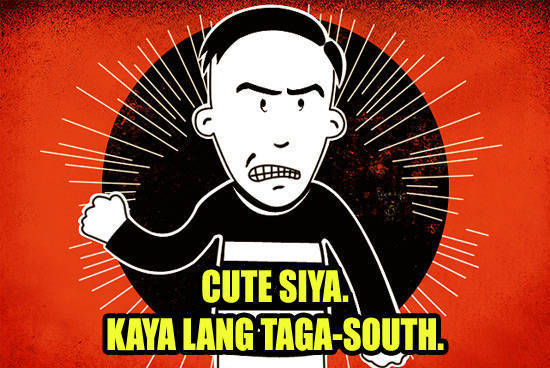 2. You’re contemplating ending a relationship because your significant other lives on the opposite end of the Metro Manila. 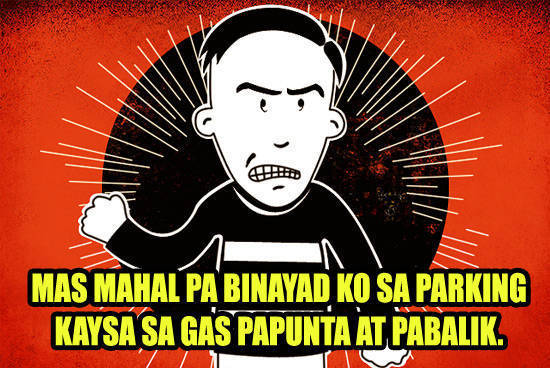 3. You’re blessed with a car but you constantly need to ask, "How much is the parking?" The whole world is complaining about increasing gas prices but damn, why does leaving your car in a building have to be expensive, too? 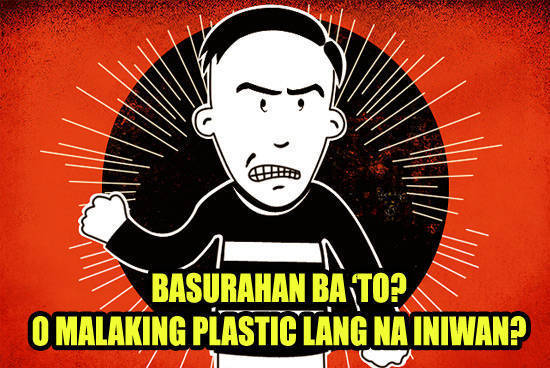 4. Where the hell are the trashbins? We can’t stand litter bugs and there’s no excuse for leaving your empty cup of milk tea on the side of the street...but why do they make it so hard for people to be mindful of their garbage? 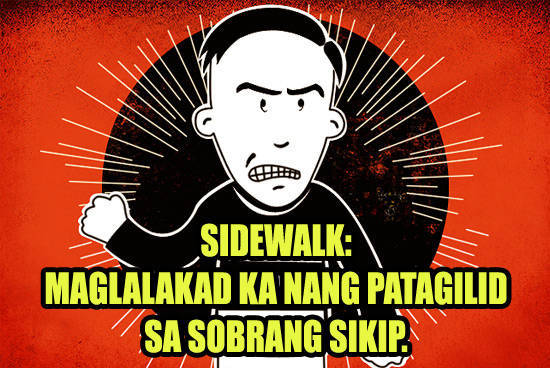 5. You want to walk to where you need to go...but sometimes it feels like the sidewalk is about an inch wide. Damn it. They keep encouraging people to walk more but...uh, where? Oh and yes, motorcycles on the sidewalk. Very nice touch.

Five more on the next page! 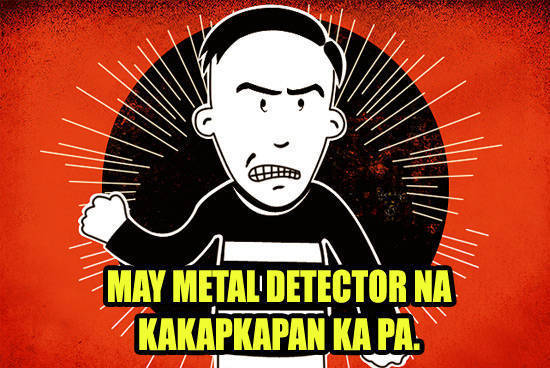 6. The rather uncomfortable feeling of being frisked and having your bag inspected before you can enter a mall (or the MRT stations). They’re doing it for our safety but...well, it’s not like that has stopped the Donut Gang from robbing anyone. This gives birth to yet another #ManilaProblem: do you buy a bag that’s easy to open for inspection but risk being victimized by thieves or a bag that’s secure but is a nightmare to open for guards? 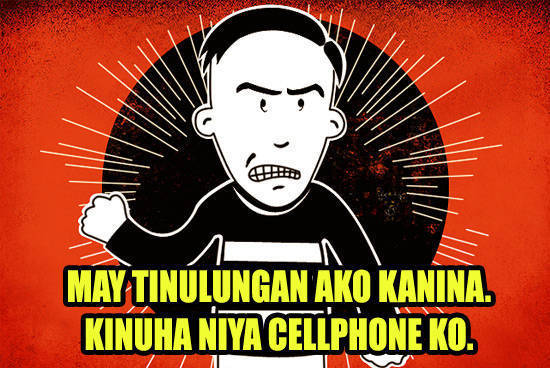 7. That constant fear that your benevolence will not only be unreciprocated, but that the person you want to help is a scammer. Why must you take advantage of kindness? Why? 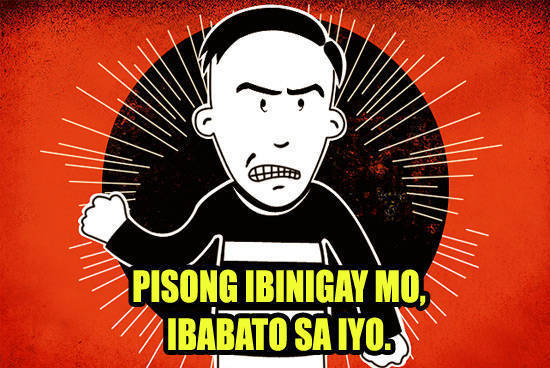 8. You give street kids your loose change...and they throw it back at you. 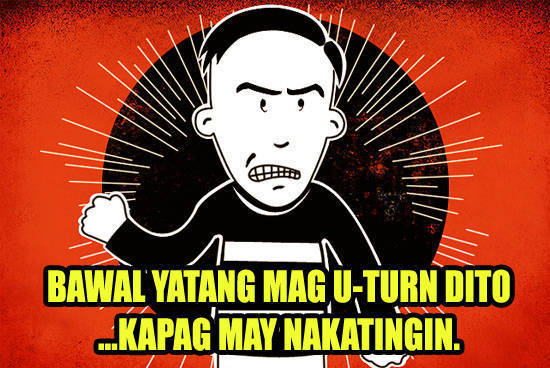 9. You have to guess the traffic rules or practice Where’s Waldo? every chance you get. Those damn street signs can be schizophrenic. 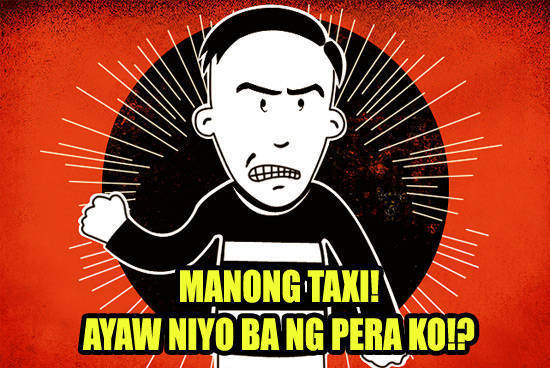 And because we love you so much, five more classic #ManilaProblems on the next page! 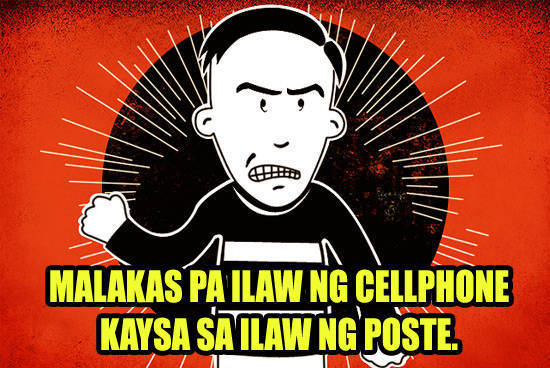 11. It’s dark. Sometimes you want to use your fancy phone as a flashlight but wait! Snatchers! 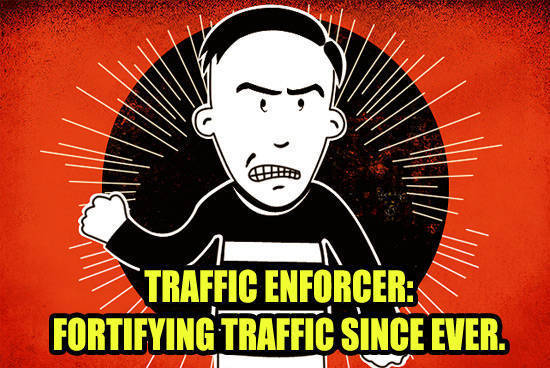 12. Yes, traffic. And it’s a common belief here that at the end of a long line of cars...is a traffic enforcer, enforcing a traffic jam. 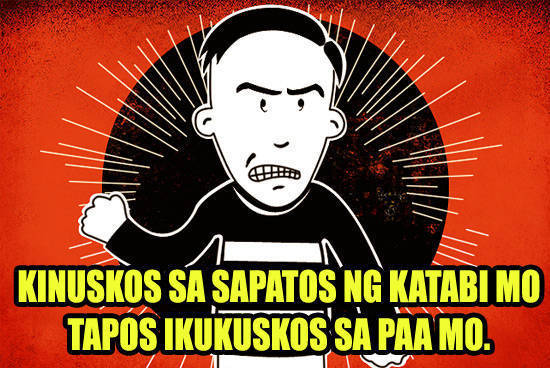 13. Unsolicited shoe-shining from street kids. This is particularly great when you’re not even wearing shoes! 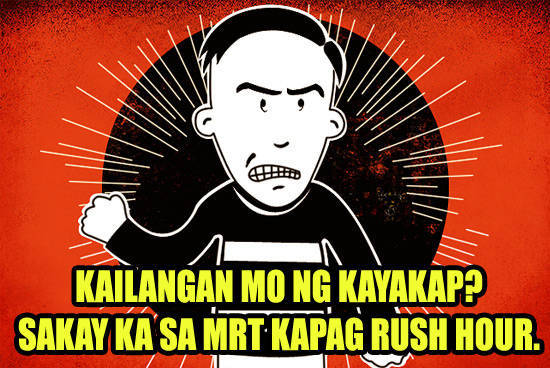 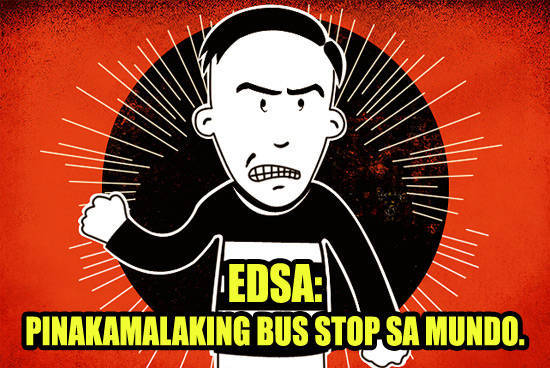 15. Drivers of PUVs take a cue from Willy Wonka: where it stops, nobody knows! Some of them have no brake lights or signal lights...or lights period. Keeps us on our toes.

Manila Problems Traffic Citylife #manilaproblems Manila
Your Guide to Thriving in This Strange New World
Staying
In? What to watch, what to eat, and where to shop from home
OR
Heading
Out? What you need to know to stay safe when heading out