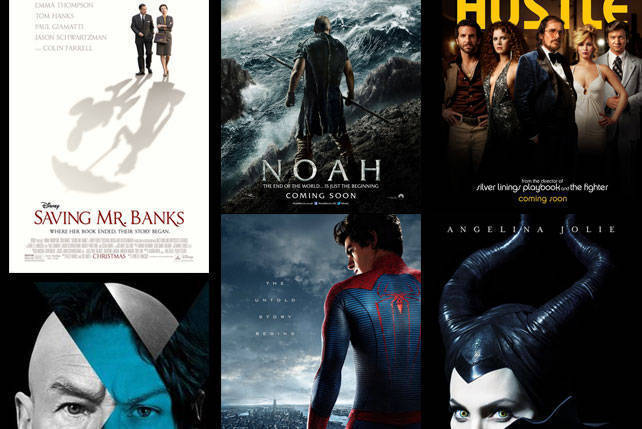 *Release dates subject to change without prior notice; some films do not have trailers available yet.

Forget Perseus and Medusa...the real clash of titans is the one fought between showman Walt Disney (Tom Hanks) and author PL Travers (Emma Thompson) to adapt her novel Mary Poppins for the big screen in the early 60s.

The Secret Life of Walter Mitty

The beloved short story by James Thurber about an ordinary Joe with a vivid fantasy life is lovingly brought to cinematic life by actor/director Ben Stiller with sumptuous images and a wistful tone.

Hayao Miyazaki is known as the "Walt Disney of Japan," and his latest animated opus is about the man who designed the Japanese fighter planes used in World War II. Not one Miyazaki film has ever been shown in theatrically in the Philippines. Let's hope that changes with The Wind Rises, which is reportedly the brilliant moviemaker's swan song.

This adult drama about a British con man who's forced to work with the FBI in 1970s New Jersey has already been named best picture of 2013 by the New York Film Critics Circle and has received 7 Golden Globe nominations, including best picture. It's from David O. Russell, the man who gave us the Oscar winners Silver Linings Playbook and The Fighter.

Can't wait till the end of 2015 to see Superman, Batman, and Wonder Woman together on the big screen? Thumb-sized versions of these Justice Leaguers- together with Green Lantern- will try to save the world from a villain who wants to glue the Lego universe together. FYI, Superman is voiced by Channing Tatum, while Green Lantern is voiced by Jonah Hill.

Based on a true story, this action drama is about the small group of museum curators and art historians who were sent to Germany as World War II neared its end to retrieve the art masterpieces stolen by the Nazis.

While touring Europe, the Muppets are embroiled in a jewel heist perpetuated by a master thief who looks like Kermit the Frog...with a mole. European locations, muppet slapstick and mayhem, Tina Fey as a Russian prison guard...what's not to like?

Thanks to The Black Swan director's hallucinatory visuals, Noah already looks like the most visually arresting biblical epic ever made.

Without sci-fi staples like monsters, aliens, and intergalactic dimension hopping, not to mention a plot rooted in the tension between the USA and Russia, this Captain America sequel feels more grounded in reality, like a Jack Ryan movie. Robert Redford's presence as a SHIELD superior gives this superhero adventure even more class.

Though it's called Rio 2, the bulk of this sequel reportedly takes Blu, Jewel, and their three baby birdies on an adventure in the Amazon rainforest. There, Blu will meet the scariest creature of all... his father-in-law.

The talented cinematographer of Memento, The Dark Knight, and Inception makes his directorial debut with this futuristic sci-fi drama about a terrorist organization's efforts to stop a computer that's smarter than all of mankind from becoming a reality.

Its electrifying trailer hints that Amazing Spider-Man 2 could end cliffhanger-style with the rise of the Sinister Six, a rogue's gallery of supervillains from the Spider-Man comics who want  Spidey dead. Could this be why Sony has already committed to releasing Amazing Spider-Man 3 and 4 in 2016 and 2018, respectively?

Why am I excited to see yet another movie about Japan's most famous kaiju? Because this one's directed by Gareth Edwards, the gifted filmmaker responsible for Monsters, that low-budget gem of a creature feature that was released in 2010.

X-Men: Days of Future Past

The stars of the original X-Men movie trilogy meet their younger prequel counterparts in a casting coup that's also a concept coup unlike anything we've seen in the movies.

Taking a cue from the stage musical Wicked, Disney's Maleficent will show us a fairy tale we thought we knew by heart from the point of view of the villain. With Angelina Jolie as the witch who waits many years to kill Princess Aurora, the future Sleeping Beauty, this one promises to be scary fun.

How To Train Your Dragon 2

A more mature Hiccup returns with his faithful Toothless in a soaring adventure that involves a new threat to all the dragons of Berk, and Hiccup's unexpected reunion with the mother he never knew.

A biopic about Walter Keane (played by Christoph Waltz), who became famous in the 1960s for his paintings of people with big eyes. Only the works were actually created by his quiet wife, Margaret (Amy Adams).

With Inception director Christopher Nolan calling the shots, this science fiction adventure about a team of scientists who journey through a wormhole could be 2014's smartest popcorn popper.

Katniss (Jennifer Lawrence) becomes the face of the rebellion against the Capitol and reluctantly deals with the "showbiz" duties the role entails. As was the case with Harry Potter and the Deathly Hallows, the big question here is, at which point in Suzanne Collins' final Hunger Games book will this prelude to penultimate movie, Mockingjay Part 2, end?

The Hobbit: There and Back Again

Those who have read JRR Tolkien's The Hobbit may think they know how this trilogy-closer will end, but as the events in The Desolation of Smaug showed, Peter Jackson can still surprise us with story tweaks and wow us with his setpieces. Here's hoping that There and Back Again ends on a high note and silences those who are still puzzled by how a relatively simple story became three long movies.

Movies 2014
Your Guide to Thriving in This Strange New World
Staying
In? What to watch, what to eat, and where to shop from home
OR
Heading
Out? What you need to know to stay safe when heading out