Pinay "Satanist" nurse fined by Swiss court for posting photos of herself with dead patients
Loading
Already a member? Log in
No account yet? Create Account
Spot.ph is your one-stop urban lifestyle guide to the best of Manila.

It’s actually much worse than what the title says. 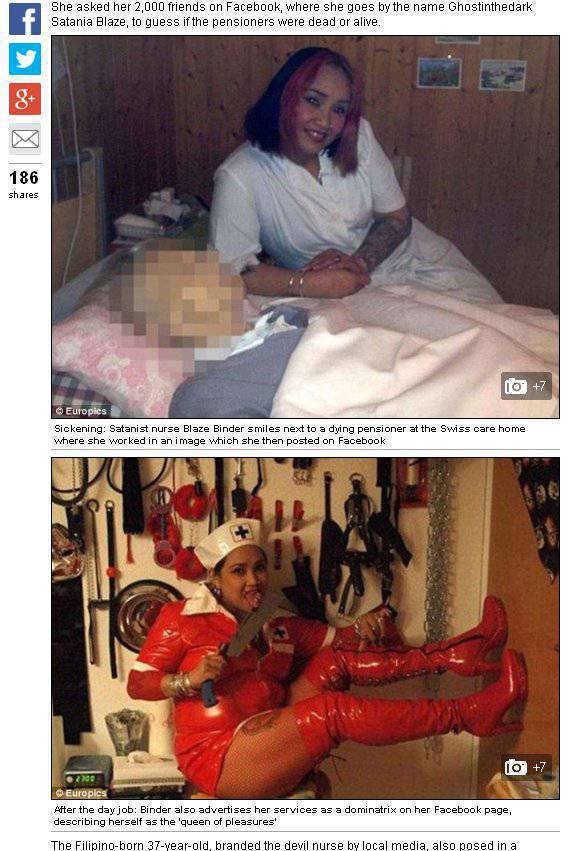 Screenshot of Binder’s pictures, as posted on The Daily Mail’s website

Simon Tomlinson of the UK’s The Daily Mail reported that 37-year-old Filipino nurse, Blaze Binder, who went by the name Ghostinthedark Satania Blaze on Facebook, was fined £800 (or about P59,000) by a Swiss court for posting photos of herself next to dying or dead patients on Facebook. In fact, when she posted the pictures, she asked her 2,000 Facebook friends to guess if the patients were dead or alive.

The photos were said to have been taken at a care home in Mogelsberg, Switzerland sometime in January 2012.

According to the report, a court in Saint Gallen in Switzerland found Binder guilty of "violating the peace of the dead" and breach of trust. The court also imposed on her a suspended fine equivalent to 120 days of pay.

We tried looking for Binder’s Facebook page, but we can no longer find it.

Crime Death Filipino Nurse
Your Guide to Thriving in This Strange New World
Staying
In? What to watch, what to eat, and where to shop from home
OR
Heading
Out? What you need to know to stay safe when heading out