Sallan went on relate that "as pointed out by Makoy Pare a.k.a Showbiz Bro, co-host of the controversial radio show/podcast Good Times with Mo, the 28-year-old Alano caught the attention of netizens with a post on Facebook last Saturday, January 25 that said:

"Justice from the universe. Thank you. After 9 years. Karma people. Don't ever underestimate it. Just be patient. The truth always comes out."

Then, on January 26, she posted this possibly in response to people who wrote insensitive comments about the issue:

"Go out and get raped. Have someone shed you of your dignity, your pride, make you scared and feel vulnerable because you couldn't protect yourself. Have someone take your right to feel safe in society and violate you as a human being. Then go out and tell your mom, your dad, the police, the doctors and everyone, that you were raped. Sound easy? Shame on everyone who has chosen to say 'innocent until proven guilty' for the accused but 'kill yourself' for the accuser. Are you proud of yourselves?" 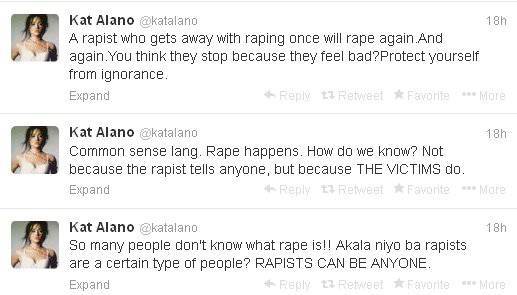