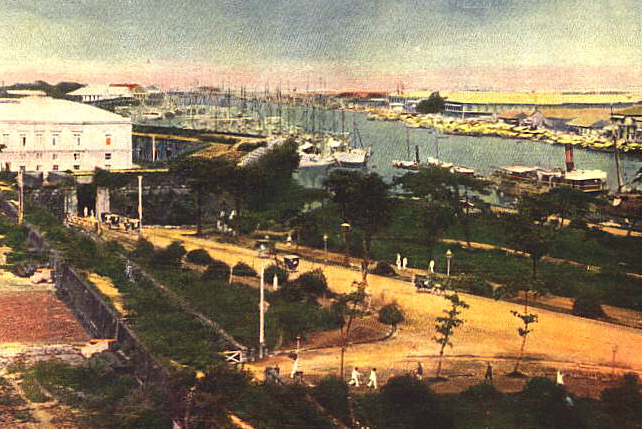 10 Reasons to Revisit the Pasig River

We took a ride down this historic waterway and what we saw was in equal parts gratifying and horrifying. Take a look to find out why.

(SPOT.ph) With the reopening of its commuter ferry on April 28, interest in the Pasig River has been revived among today's generation. Here are 10 facts that may interest you as you travel along the Pasig. Interspersed in this piece are images of the Pasig-its past and present. 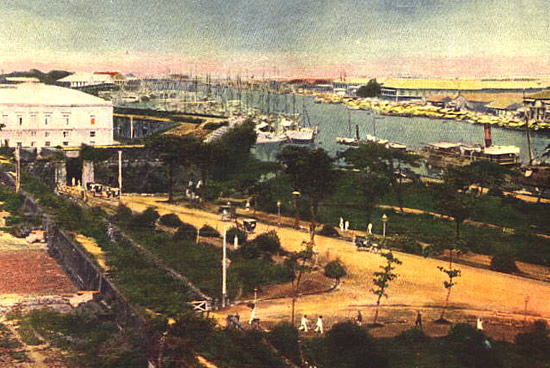 1. The bridges of the old Pasig

During the Spanish period, there were only three bridges that spanned the Pasig River:  the Puente Grande or Puente de España (connecting Intramuros and Binondo); Puente de Colgante (a hanging bridge that connected the southern shore with Quiapo); and Puente de Ayala (connected San Miguel and Ermita). 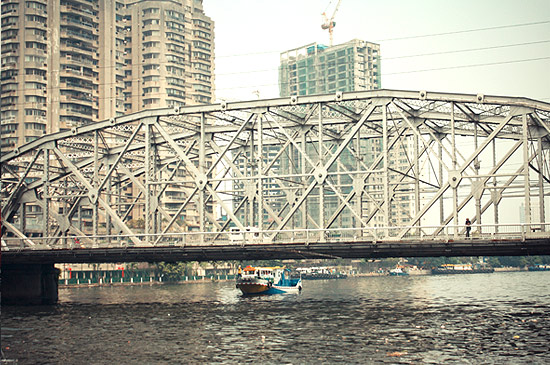 The elegant Ayala Bridge, which should go well with a revived river. Photo by Warren Espejo

3. The river once inspired great art.

The song "Mutya ng Pasig" was composed by Nicanor Abelardo with lyrics by Deogracias Rosario.  Abelardo was inspired to write the song following a carnival in Pasig in 1926 and decided to use an old musical style called the kumintang. A film of the same title was released in 1950, directed by Nicanor’s cousin, Richard Abelardo.  The video here is a rendition of the song by acclaimed soprano Rachelle Gerodias. There are other examples of art inspired by the Pasig on this list, such as the next item. 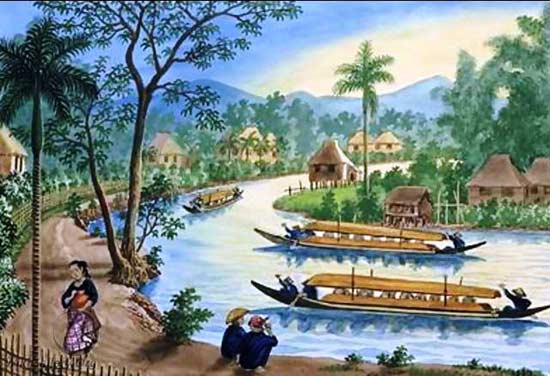 The word Taga-ilog referred to the "people who live along the river shores." One of these communities lived along the Pasig River.  They eventually became known as the Tagalogs. 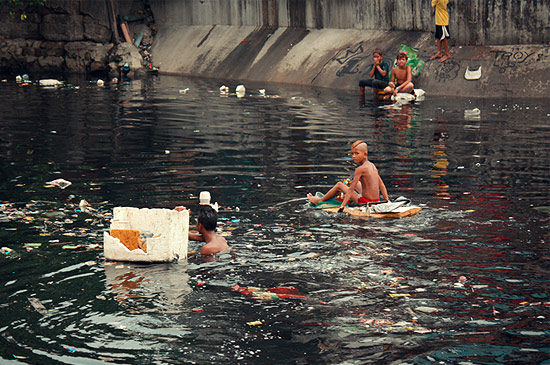 The Pasig River used to be infested with crocodiles, which became the stuff of legends and stories, some of which were recorded by Jose Rizal.  In fact, a place near today's Barangay Pineda in Pasig had a rock formation known as "Buwayang Bato," allegedly a huge crocodile that was turned to stone after a Chinese Christian, about to be devoured by the creature, asked for the intercession of San Nicolas de Tolentino. 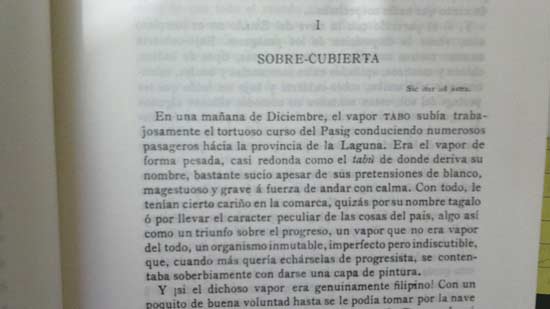 The Fili begins with a boat scene by the Pasig.

Jose Rizal himself wrote about the Pasig River using it as a setting for his zarzuela "Junto al Pasig" and in his two novels, Noli Me Tangere and El Filibusterismo. 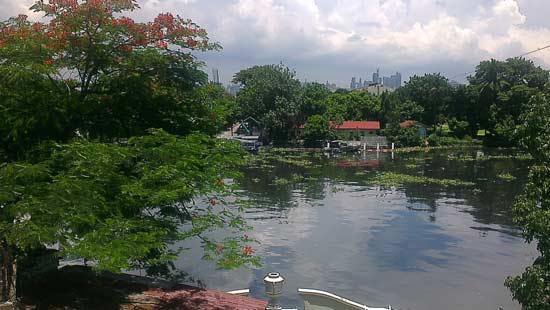 This is actually how beautiful the Pasig can look from a certain vantage-Malacañan Palace.

7. The view from the Palace

The most famous house located along the Pasig River is, of course, Malacañan Palace, which was formerly a villa owned by a Spanish businessman, Luis Rocha.  This villa was later acquired as the summer residence of the Governor-General of the Philippines and it became his official residence after the 1863 earthquake that destroyed the Palacio del Gobernador in Intramuros. 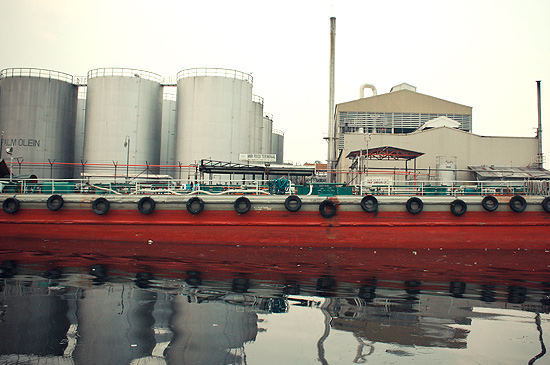 But the factories remain. Photo by Warren Espejo

It was in 1993, during the administration of President Fidel V. Ramos, that the Pasig River Rehabilitation Program was organized in an effort to clean the Pasig River. The Pasig still remains a testament to how these environmental programs have been going. 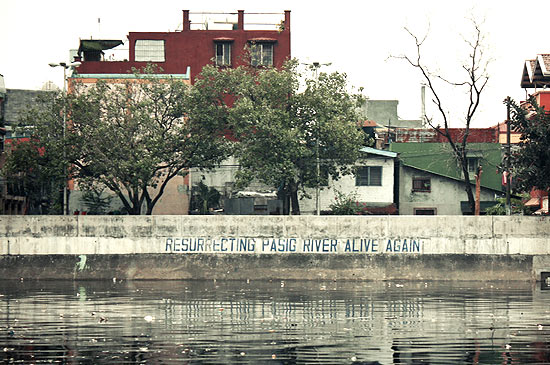 The black waters of today’s Pasig. Photo by Warren Espejo

9. The Pasig River wasn't exactly a "clear, clean river" before.

Old timers say that the river waters were mostly brown with silt, but because it was continually flowing, it usually drained much of it out into the sea.  The river was the source of water for washing, bathing, and drinking.  In order to make the water palatable, molasses was usually mixed into the drinking water before it was sold. 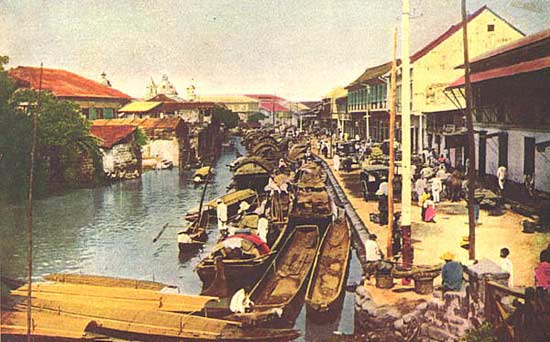 Commerce at a tributary of the Pasig during its heyday.

When the Philippines became open to world trade in the 19th Century, the Pasig River was the center of trade in the country.  In fact, the customs house (Aduana) was located in Intramuros and, later, in San Nicolas, and a lighthouse (Farola) was built near the mouth of the river.

Jose Victor Z. Torres holds a doctorate in history and teaches at De La Salle University. He is a Palanca awardee in the drama category and he also won the National Book Award for his Ciudad Murada, a historic walk-through of old Intramuros.

The Pasig Ferry service operates on weekdays and starts at 6:45 a.m., with succeeding trips at 30-minute intervals from that time, until 10:15 a.m. Afternoon trips begin at 2:45 or 3:45 p.m. The opposite end of Guadalupe station in Makati is Escolta station in Binondo, Manila. The ferry also makes a stop at Pinagbuhatan, PUP, and Intramuros stations.

Pasig River Jose Rizal Pasig River Rehabilitation Program
Your Guide to Thriving in This Strange New World
Staying
In? What to watch, what to eat, and where to shop from home
OR
Heading
Out? What you need to know to stay safe when heading out