Deniece Cornejo turns herself in, poses for mugshots

The report noted: "Cornejo was accompanied by her granduncle, Rod, whose statement had been read on Buzz ng Bayan on Sunday, May 4. It was he who had appealed to her to surrender."

Cornejo was then taken to the PNP-Criminal Investigation and Detection Group building, where she was processed at the Women and Children Protection Desk. There, she also posed for mugshots. 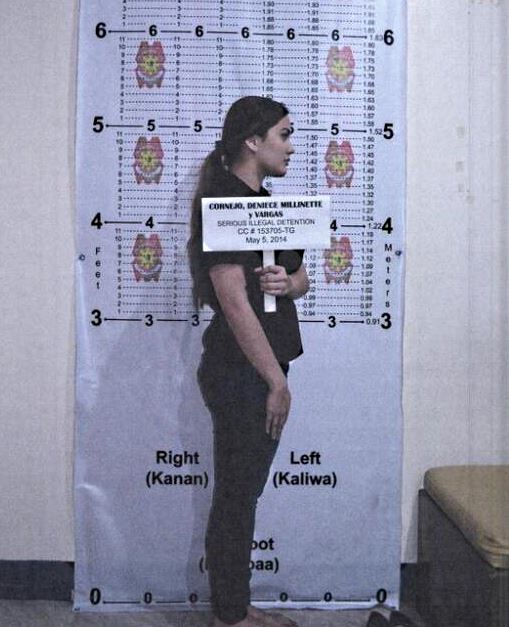 Cornejo as photographed by the PNP. Photo from the Twitter page of ABS-CBN’s Doland Castro

This isn’t a movie, so this means that the saga of Cornejo-who accused actor Vhong Navarro of rape and maintains that she didn’t try to blackmail him-is far from over.

Cornejo faces jail time for the serious illegal detention charge that Navarro filed against her in connection with his January 22 mauling. He has accused her-along with her friends Cedric Lee, Bernice Lee, Jose Paolo Calma, Ferdinand Guerrero, Jed Fernandez, and Zimmer Raz-of trying to blackmail him. (Note: Bernice Lee and Jose Paolo Calma were excluded from the serious illegal detention charge, though.)

Vhong Navarro Deniececornejo
Your Guide to Thriving in This Strange New World
Staying
In? What to watch, what to eat, and where to shop from home
OR
Heading
Out? What you need to know to stay safe when heading out