Who the hell is this "Pinky" person, anyway?

ABS-CBNnews.com reports that when asked to answer "Yes" or "No" to a series of questions, Lacson answered in the affirmative when some names were brought up.

Lacson named the following as among the alleged pork barrel scam participants:

Naturally, the hornet’s nest was abuzz on Tuesday morning, May 13.

For starters, Senator Miriam Defensor Santiago responded to Lacson’s accusation with a statement that has "I hate you" written all over it. (But not literally.)

"Anyone can make lists. I was told that there is a list entitled, ’Closeted gays or bisexuals in public service.’ I was given names, and I was requested to say ’Yes’ or ’No’ on whether the person was truly in the list. When the name Pinky Lacson was called, I said ’Yes.’"

"Anyway, there is an affidavit, although unsigned, circulating in Metro Manila that Pinky Lacson has asked for leave of absence from Malacañang. The highly confidential reason is that he is scheduled for a gender change operation in a remote clinic in the United States."

She turned serious, though, when she emphasized, "For the record, I never had dealings with Napoles. The Napoles list, if unsigned, has no evidentiary value at all. I repeat, Lacson is an attack dog of Enrile. The Supreme Court has repeatedly ruled that to allege is not proof. Where is the evidence, as defined in the Rules of Court? I am pushing to get the list of Benhur Luy. I understand that the Luy list is substantiated by documents and details."

In any case, in the list that Lacson submitted to the Senate, Santiago’s name was nowhere to be found 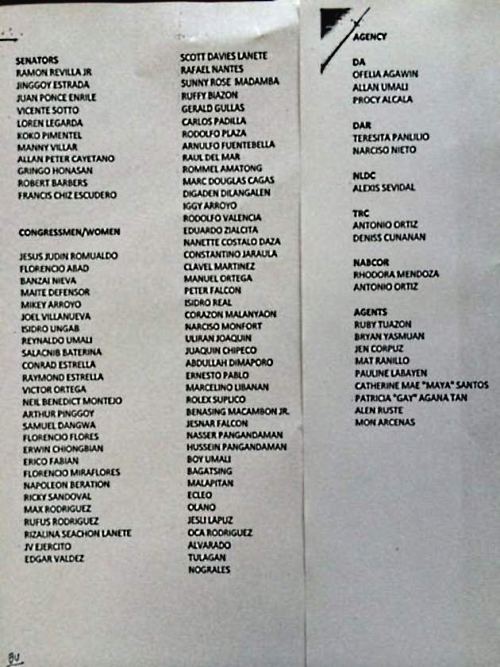 Screenshot of list submitted by Lacson to Senate Blue Ribbon Committee (as posted on ABS-CBNNews.com)

For more on this story, log on to ABS-CBNnews.com.

Miriam Santiago Pinglacson
Your Guide to Thriving in This Strange New World
Staying
In? What to watch, what to eat, and where to shop from home
OR
Heading
Out? What you need to know to stay safe when heading out