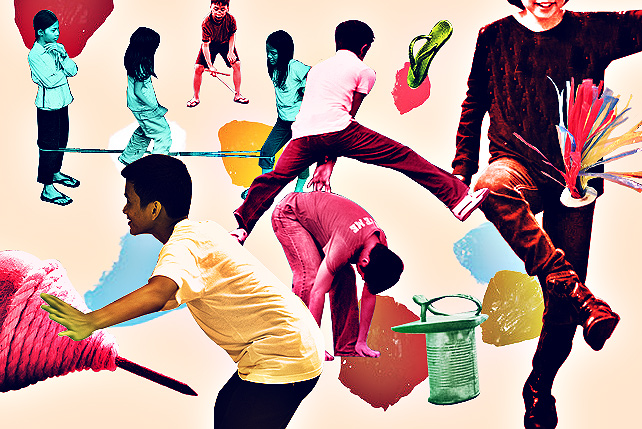 Taguan, patintero, sipa-these games bring us back to the days when the "real" world was the only world we knew. 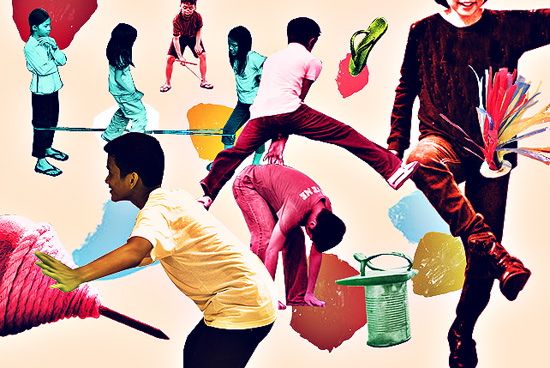 (SPOT.ph) Remember when it was almost customary to go outside during a not-too-hot afternoon for a round of habulan? We have dozens of gaming apps in our smartphones, but none of them induce the same kind of exhiliration as running away from the taya. Going invisible in chat? Not quite as fun as taguan.

The sweltering heat prevents us from even thinking of stepping outside and the comfort of air conditioning has become the highlight of our days...which makes us miss childhood even more. Maybe the reason why we feel so stressed is because we’re not out on the streets, getting physical with playmates. (Remember when that didn’t mean anything sexual?)

Time to go out and play these classic Pinoy street games. Or at least, relive them in our heads. 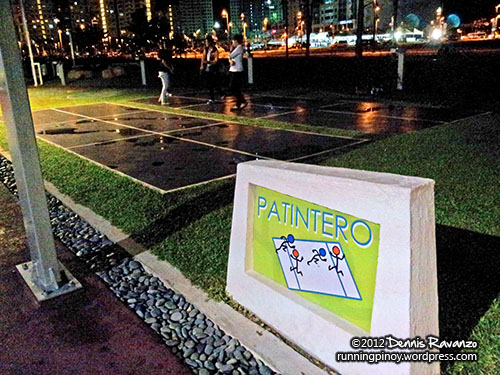 Patintero is a unique Filipino variation of tag, sometimes called tubigan because water was used to mark the gridlines for the game. The goal is for all the members of one team to pass through the area covered by the grid without being tagged by the opposing team. Everybody wanted to be the guard on the middle line. Best tag spot, right? Raise your hands if you wished your arms were longer! Yao Ming and Shaquille O'Neal could have been MVPs in this game. 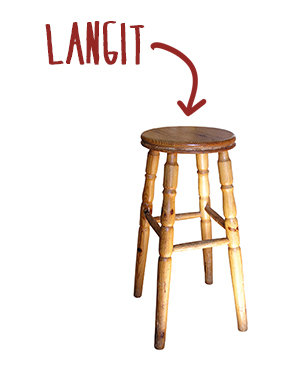 Don't lie, you read that with a certain tune in your head. Elevated areas are safe zones and you have to leave your post intermittently to give the current taya a chance to tag you. Umalis ka na diyan sa pwesto mo makes us feel like politicians should play this game. 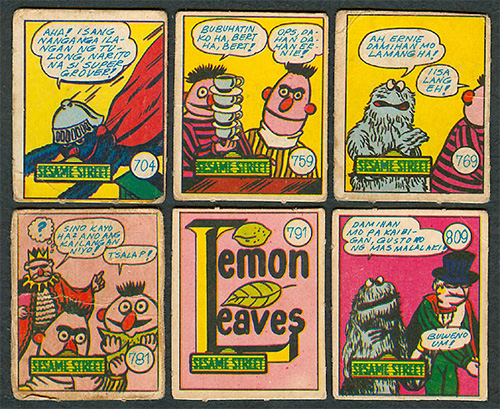 Teks are small pieces of stiff paper printed with the latest in cartoon crazes (Dragon Ball, Street Fighter, or Pokémon, maybe?). The main goal here is that your pato (your chosen teks card) beats your opponent’s bet by landing on the "right" side. A bit of gambling is involved, as the winner takes the loser’s cards (measured in dangkal). Remember how much you hated your neighbor for taking your collection one sunny afternoon? Have you guys made up yet? 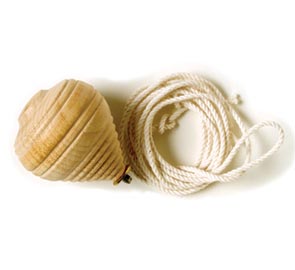 Playing with turumpo, a wooden top designed to spin on an axis, takes a lot of skill and practice. On a player's turn, they must hit the other spinning tops and be able to mark it to emerge victorious. Top owners usually use cloth (and other materials like metal pins) to soften the "hit" and be able to play a little longer. The best part of the game is not the turumpos-it's the frigthened faces of other players as the tops spin dangerously close to each other. Friendships have been tested through this game. 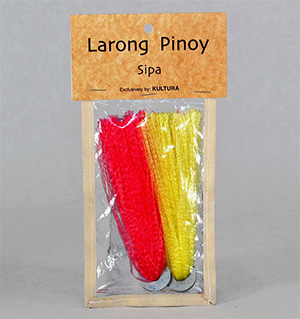 A library of moves has been established in playing sipa (the kanto version of sepak takraw). A washer (a small, thin plate of metal with a hole in the middle that fastens bolts and nuts in place) is strung with threads, usually from plastic straws. This, in turn, is volleyed from player to player by kicking it with the sole or side of the feet and, for effect, the knees. The goal is to outnumber the "kicks" that the other player has done. The other goal is to not get hit on the face with the sipa. 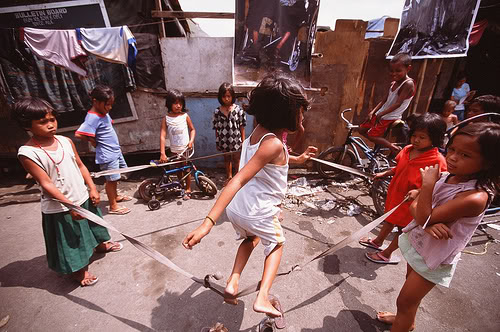 You've never fully lived out being a schoolgirl if you haven't played Chinese Garter, or as we also used to call it, 10-20. Even if the game required calling out the multiples of 10, it was a good break from Math subjects. Young girls used to play it wherever they could find space to jump around in-in the classroom during recess, on the school grounds, or in the garden outside their homes. Remember to wear shorts! (Not because boys will look but because your mother thinks they will.) 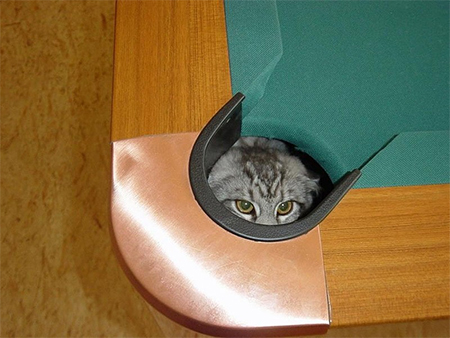 Cats are really good at this game. Photo from www.somepets.com

Who didn't like playing hide-and-seek when they were kids? Tagu-taguan or simply taguan was as classic in our country as its counterparts in the rest of the world. It was fun looking for the most unsusual hiding places, when our bodies could still fit in the most cramped crannies. We went into closets, the cupboard under the kitchen sink, the empty water drum, and the eskinita near the house. The game gets better when night falls and the darker spots become spooky! 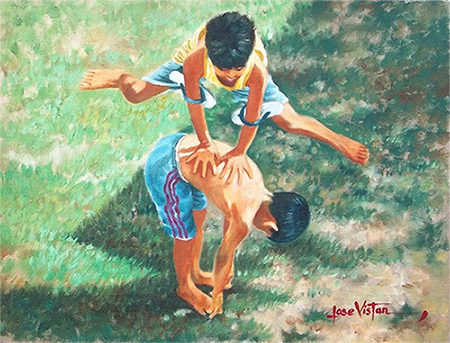 Both games have the same concept but are played in slightly different ways. In luksong baka, players jump over a crouched person who pretends to be the cow. In luksong tinik, the aim is to jump over the hands and feet of two players forming the tinik (obstacle). The games progress as the baka gradually stands up, and as the tinik gets higher. The players then have to make taller jumps, the same exercise done in Chinese Garter. Tall kids always win these games. Boo.

Screencap from "Betamax" by Sandwich

The opening scene of the music video of Sandwich's popular song, "Betamax," features a boy hitting a can with his slippers. Heavy on nostalgia, the song became an instant hit for everyone who enjoyed a Sunday afternoon playing with friends. Tumbang Preso was part of the video for it because it was part of all the good things we miss, like days when we listened to the likes of Asin or Heber Bartolome on vinyl or cassette tapes because there were no CDs, iPods, Android phones, or Internet yet. "Wala pa nung Myx, wala pa nung MTV," as the song goes. We didn't play games on the computer then, we went out on the street to hit tin cans with slippers. 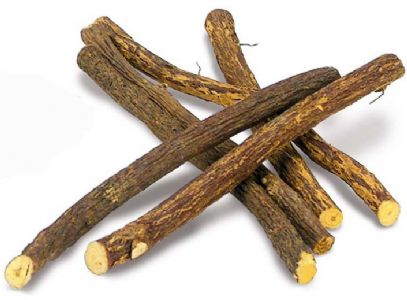 This simple and short game was ideal for those times when you didn't want to play anything too tiring. In this one, you're supposed to hit, using a long stick, another shorter stick propped on a rock to toss it into the air, then hit it again as far as you could. Be careful not to miss hitting the short stick while it's in the air-that means you have to pick up a thrown stick and run to the home base with it while shouting "siyatooooooo!"