Philpop now has an album! 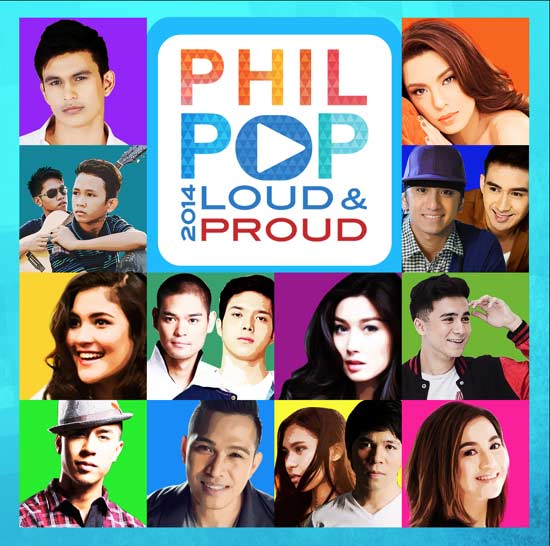 The Philpop Festival has released an all-star album this 2014-what promises to be another eventful year for the Philippines' premier songwriting competition.

Philpop traces its roots to the prestigious Metro Manila Popular Music Festival, or Metropop, of the '70s and '80s-a period that saw the flourishing of OPM, and of composers like Ryan Cayabyab and Nonong Pedero and singers like Basil Valdez, Hajji Alejandro, and Leah Navarro.

Now on its third year, Philpop has doubled its original grand prize of P500,000, so that this year's grand prize-winning song entry by the end of this competition on July 26 will receive a hefty P1 million.

From the designated period of November last year to February this year, aspiring songwriters around the country submitted their entries for the 2014 competition through the Philpop website. The top 12 entries were subsequently chosen and now an album has been released featuring these songs, as interpreted by Luigi D'Avola, Thor, Aldrich and James, Kris Lawrence, Nikki Gil, Nicole Asensio, Kyla, Kiana Valenciano, Duncan Ramos and Young JV, Elmo Magalona and JayR, Clara Benin and Mcoy Fundales, and My Husband's Lover star Tom Rodriguez.

The recording carries on the track record of Metropop, which, in its heyday during the vinyl era, released albums featuring its winning songs and interpreters. Not a few of Metropop's winning songs have since become classics, such as "Kay Ganda ng Ating Musika" and "Isang Mundo, Isang Awit."

The Philpop album is exclusively available through music portal Spinnr.

Philpop Opm
Your Guide to Thriving in This Strange New World
Staying
In? What to watch, what to eat, and where to shop from home
OR
Heading
Out? What you need to know to stay safe when heading out