If that’s true, then it takes patience to be in that kind of party.

In case you didn’t know, Zion is Sarah’s son with actor Richard Gutierrez. In the second episode of the reality show, It Takes Gutz to be a Gutierrez, it was revealed that Esther was the one who brought Zion from Switzerland to Manila. In fact, Richard said, "Immigration officials didn’t ask if Zion was really Tita Esther’s baby because her last name is Lahbati and Zion’s last name is also Lahbati." In one of Esther’s Instagram posts, she revealed that Zion’s actual birthday is April 29, 2013.

What made matters wose, Esther claimed, was that when the party was winding down, somebody reportedly told her to gather the leftovers. Esther recalled, "At the end of the day sinabihan pa ako ng, ’Esther, magbalot ka ng mga tirang pagkain dyan’ (At the end of the day, I was even told, ’Esther, bag up the leftovers there.’)." Esther didn’t identify this person by name, though.

Esther went on to lament, "Pinarinig pa sa mga bisita, grabe! Naawa ako sa sarili ko. The whole party hindi ako pinansin tapos para ako patay gutom na aalukin ng tirang pagkain (The guests had to nhear it. I pitied myself. The whole party I got ignored then I was treated like a scavenger who’s invited to partake of leftovers)."

According to the PEP.ph report, Esther’s controversial post has since been deleted. Sarah, on ther hand, soon responded with an Instagram post of her own-a photo of herself, Richard, and Zion with her parents. 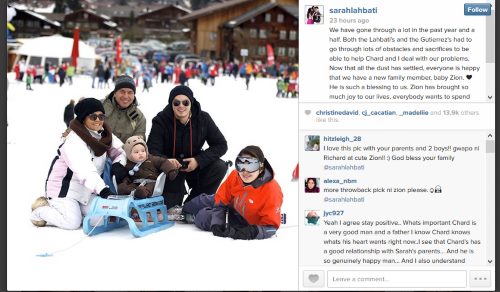 Sarah typed this caption to accompany the photo (posted word-for-word, with no edits): "We have gone through a lot in the past year and a half. Both the Lahbati’s and the Gutierrez’s had to go through lots of obstacles and sacrifices to be able to help Chard and I deal with our problems. Now that all the dust has settled, everyone is happy that we have a new family member, baby Zion. ❤️ He is such a blessing to us. Zion has brought so much joy to our lives, everybody wants to spend time with him. Like any other family we have misunderstandings but we will settle this internally and we will move forward. I hope that we can all live in harmony. Accept, support and understand one another for the sake of baby Zion... ❤️"

Sarah Lahbati Richardgutierrez Estherlahbati
Your Guide to Thriving in This Strange New World
Staying
In? What to watch, what to eat, and where to shop from home
OR
Heading
Out? What you need to know to stay safe when heading out