DFA explains why Jolo Estrada was issued a diplomatic passport

It turns out it’s all part of protocol. 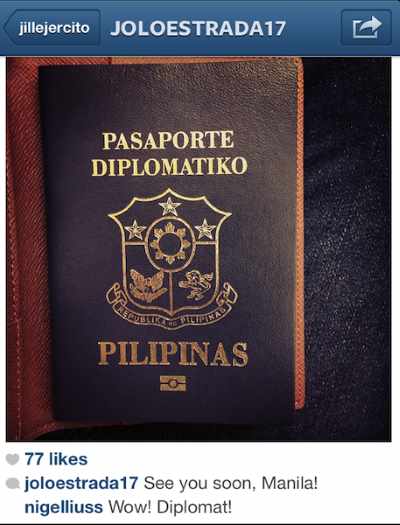 Recently, Pinoy netizens were abuzz about the Instagram posts of Senator Jinggoy Estrada’s son, Jose Luis "Jolo" Estrada. The story featuring the young Estrada’s posh lifestyle (as shown through screenshots of his Instagram posts) was reportedly first sighted on the website, Manila Speak. Jolo, with the IG username @joloestrada17, has since turned his page private.

Another site, BV Patrol, had also posted screenshots of Jolo’s IG posts-one of which showed a diplomatic passport. (See screenshot above from BV Patrol.)

ABS-CBNnews.com reports that "the Department of Foreign Affairs (DFA) has confirmed that Jolo has, indeed, been issued a diplomatic passport."

Jose was quoted as saying, "So, spouses and unmarried minor children who will accompany government officials on official travel are entitled to diplomatic passports. Only official travel. Pursuant to that regulation, the son of Sen. Jinggoy Estrada was issued a diplomatic passport because he was 18 years old at the time when he was given one and now he’s already 21."

Jose reiterated that "Estrada’s son can’t use the diplomatic passport for unofficial or personal travel."

"He can’t travel on his own using it. It should be official travel and travel with the principal. Official mission with the principal. This is how the diplomatic passports and official passports work. It’s valid on a per travel basis. It will not be valid for use if it’s not revalidated by the DFA. For it to be revalidated, the requesting office for example should submit a travel order approved by their principal. So, if it’s not revalidated, Immigration won’t allow the person to leave even if it’s technically supposed to be valid for a year," Jose added.

In other words, the only thing Jolo’s IG shot of his diplomatic passport is good for now is "Throwback Thursday."

For more on this story, log on to ABS-CBNnews.com.

Jolo Estrada Jinggoyestrada Dfa
Your Guide to Thriving in This Strange New World
Staying
In? What to watch, what to eat, and where to shop from home
OR
Heading
Out? What you need to know to stay safe when heading out