Pluto is kind of a planet, Tom Rodriguez is criticized for crying, and more. 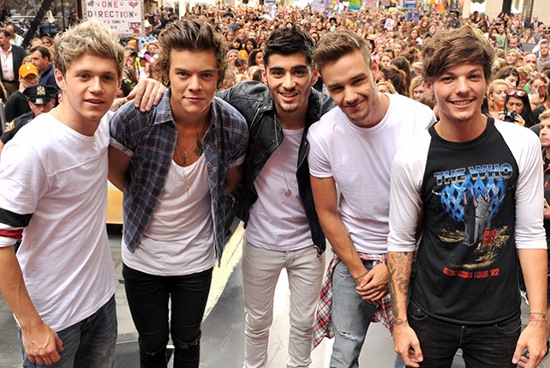 1. A marriage proposal during a One Direction concert

Marriage proposals are a big deal, and some people really like to go all out. Take Bradley Chisenhall, for example, who proposed to his girlfriend at a One Direction concert on Wednesday (October 1). In between songs, Harry Styles announced his friend Bradley was in the audience-and then the camera cut to Bradley down on one knee. After she said yes, Styles joked that he would have brought the two up on stage, but Bradley rushed things.

Bradley made it happen by tweeting his plans to the band, and got #1DProposal trending from other fans.

Police Chief Supt. Alexander Ignacio is planning to file charges against model Alyzza Agustin, who stirred online controversy after she posted on Facebook that she used the cop's business card to avoid getting a traffic citation. "I am consulting with the PNP Legal Service as well as the CIDG [on] what appropriate charges I can file," Ignacio said in a text message to ABS-CBNnews.com on Thursday.

Ignacio earlier denied that he personally knows Agustin, adding that the business card which the model used was not official. He also said that he would not tolerate the use of his business card or privileges of his rank "for unlawful purposes."

More than a dozen Hollywood celebrities whose naked pictures were hacked and posted online have threatened to sue Google for failing to crack down on the leaks. In a letter by lawyer Marty Singer published by the Hollywood Reporter, they warned they could seek $100 million in damages from the company.

"We are writing concerning Google’s despicable, reprehensible conduct in not only failing to act expeditiously and responsibly to remove the images, but in knowingly accommodating, facilitating, and perpetuating the unlawful conduct," said the letter, written on behalf of over a dozen unnamed celebrities.

5. PNP Chief Alan Purisima: "My home is an ordinary house, not a mansion"

Philippine National Police (PNP) Chief Director General Alan Purisima maintained on Thursday that his alleged hidden property in San Leonardo, Nueva Ecija is not a mansion, even inviting the media to his "ordinary house" to prove his claim. "Ordinaryong bahay lang po na inimprove natin over the years," said Purisima.

Purisima has been embroiled in several plunder charges for allegedly misdeclaring his Nueva Ecija property on his Statement of Assets, Liabilities and Net worth (SALN). The PNP chief maintains that the market value of his property is worth around P3 million.

6. Catch Mexico: Fantastic Identity at the Ayala Museum, until November 9

7. Pluto is a planet again

...sort of. After an eight year exile from the list of technical planets in our solar system, Pluto might be making its way back to the celestial roster. The Harvard-Smithsonian Center for Astrophysics recently decided to revisit the International Space Union's ruling by hosting a discussion on the definition of a planet. Two out of three experts said it was a planet, and while the vote isn’t official, it is a start.

8. Tom Rodriguez responds to bashers who says his crying on Don’t Lose The Money was "unmanly"

Isn’t sensitivity a plus for the ladies? Not to some bashers, who attacked Tom Rodriguez online after his birthday episode on Don't Lose the Money. Tom told GMANetwork.com that he respects whatever people have to say. "If they're gonna say it's not masculine, okay lang. That's their opinion," he said.

"I was just reacting on how I felt. My family is my weakness. I miss them so much and I'm at my most vulnerable all the time when it comes to my family because I do everything for them," he added. All together now: awww.

It’s a long weekend! How about a leisurely stroll down these 10 gorgeous parks in Manila? Yes, there are still some patches of green in this concrete jungle.

He added: "Ang feeling ko was I’m very thankful that a person like Kris Aquino has acknowledged someone like Herbert Bautista."