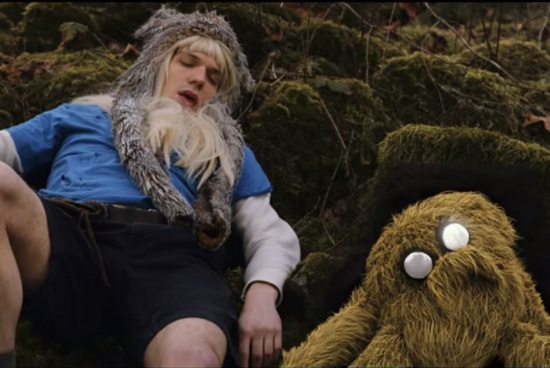 Don’t get too excited. It’s not an actual film trailer. YouTube's Gritty Reboots channel has made a live-action movie trailer of the Cartoon Network hit show. This version is set in a post-apocalyptic Land of Ooo, and it looks gritty and emotional. So far, fans are more than eager to see it transformed into a full-length film.

2. In photos: Hacienda Binay has a maze garden and airconditioned piggery

Former Makati Vice Mayor Ernesto Mercado on Wednesday presented a video of a 350-hectare property in Rosario, Batangas, which he believes is owned by Vice-President Jejomar Binay. He said the estate has two mansions, an airconditioned piggery, orchid farm, cockbreeding farm, horse ranch, and a man-made lagoon. He added that the size of the property is equivalent to "six Luneta Parks, 10 Araneta Centers, or even half the city of San Juan."

Binay has denied ownership of the estate, saying it is under the name of businessman Antonio Tiu's Sunchamp Agri-Tourism Park. Senator Antonio Trillanes III, however, believes otherwise and has laid out the alleged links between Binay and Tiu.

Quezon City Mayor Herbert Bautista has expressed his support for same-sex marriage as he referred to a proposed local ordinance protecting lesbian, gay, bisexual, and transgender (LGBT) rights as his gift to the city in time for its 75th founding anniversary. "I was watching the news and there was another court in America which [legalized] same-sex marriage or what they call 'equality marriage.' I look forward to the day the Philippines or Quezon City will have an equality marriage ordinance," Bautista said in his State of the City Address on Tuesday (October 7).

The plot thickens. Mary Christine Jolly filed a complaint for concubinage against Derek Ramsay and his former girlfriend, actress Angelica Panganiban, on Wednesday in the Parañaque City prosecutor's office. Assisted by her lawyer Argee Guevara, Jolly said she had "overwhelming evidence" that Ramsay and Panganiban "cohabited" in Marina Heights Subdivision in Sucat for five years "despite knowledge'" that her 2002 marriage to Ramsay was still binding.

It’s happening. Bridesmaids and The Heat director Paul Feig said on Wednesday that he is working on a new Ghostbusters film for Sony Pictures and co-writing the movie. "Yes, it will star hilarious women. That’s who I’m gonna call," he announced on Twitter. The studio had no further details on casting or a release date.

On Wednesday, Transportation Secretary Joseph Emilio Abaya defended NAIA personnel who were called "impolite" by US-based website Cheat Sheet. "I don't believe that we are impolite. We have yet to see an uncourteous public servant. There are some rotten eggs, but I don't think it should be a fair, general description of our airport personnel," Abaya said after defending the 2015 P54.5-billion budget for the Department of Transportation and Communications.

7. Ebola victim dies in US hospital

The first person diagnosed with Ebola in the United States, Liberian national Thomas Eric Duncan, died on Wednesday morning at a Dallas hospital, a hospital spokesman said. Duncan became ill after arriving from Liberia on September 20, heightening concerns that the world’s worst Ebola outbreak on record could spread outside of the three worst-hit West African countries. About 48 people with whom Duncan had been in contact are being monitored.

According to the World Health Organization, Ebola has killed more than 3,400 people in Liberia, Sierra Leone, and Guinea since the deadly outbreak began in March.

Even the guy who designed the Makati City Hall Building II doubts that the total cost of the construction of the controversial building reached P2.2 billion. Carlo Mateo, managing partner of MANA Architecture and Interior Design, said the structure should only cost P45,000 to P55,000 per square meter, compared to the P86,000 billed by Hillmarc’s Construction Corporation.

You don’t have to break the bank to take care of the delicate area around your eyes. Unless, of course, you really want to. Protect those precious peepers, folks!

10. 10 Cakes That Will Make You Forget About Chocolate

We think these delectable cakes can give the good ol’ chocolate cake a run for its money. We actually dare to ask: Chocolate who?