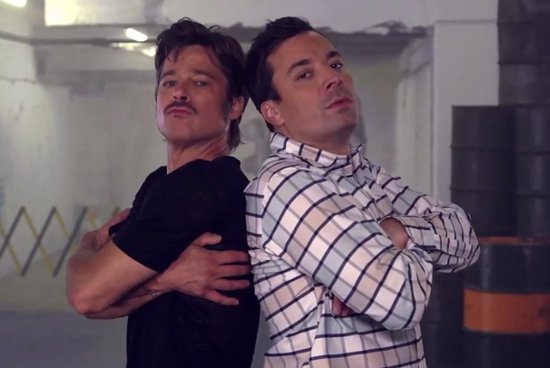 1. Brad Pitt and Jimmy Fallon have a "breakdance conversation"

Sometimes, plain old words just can’t quite cut it. Instead of talking about his new flick Fury, Brad Pitt and Jimmy Fallon decided to have an entire conversation through the power of dance. Also starring Brad’s mustache.

2. What PH airports will do in case of Ebola threat

The Manila International Airport Authority on Wednesday said it is prepared for the possible entry of the Ebola virus and other diseases from abroad. Lieutenant Colonel Robert Simon, officer in charge of the airport emergency services department, said an airport emergency plan is ready for implementation once the Bureau of Quarantine and International Health Surveillance of the Department of Health informs them of the possible contamination of a passenger.

The plan includes more than 200 pieces of protective equipment that can be worn by airport emergency personnel, 10 inflatable medical tents that can be utilized in less than 10 minutes, designated isolation remote parking for aircraft sanitation, and a quarantine area for passengers suspected to be contaminated.

Facebook has unveiled a "safety check" tool to allow users to alert friends and family about their status in emergencies, a system developed after the 2011 Japan earthquake and tsunami. Users in areas affected by a disaster will get a notification asking "Are you OK?" and they can select to click "I’m safe" and status updates will be sent to friends.

Facebook will use a user’s smartphone location to determine if someone is affected by a catastrophe, while allowing people to correct any location mistakes.

Trillanes said he knew for a fact that the Liberal Party (LP) is not involved in the supposed smear campaign against Binay. "Kung alam niyo lang ’yung totoong storya dito, hindi nyo talaga paniniwalaan ’yung ganyan," he said, but did not elaborate.

5. Watch: The official trailer for In the Heart of the Sea

Hollywood is adapting In the Heart of the Sea, Nathaniel Philbrick’s National Book Award-winning tale of the whaling expedition that inspired Moby Dick. Chris Hemsworth, Cillian Murphy, and Brendan Gleeson star as sailors forced to battle for survival after their boat is sunk by a whale. The film will be directed by Ron Howard.

Time to break out the jackets and sweaters. The Philippine Atmospheric, Geophysical and Astronomical Services Administration (PAGASA) officially declared on Thursday the start of the cold weather-associated northeast monsoon or "hanging amihan" in the country. In short? It’s officially the "Ber" season.

Justice Secretary Leila de Lima has ordered the National Bureau of Investigation to begin investigating the alleged corruption in Makati City and other controversies involving Vice President Jejomar Binay, his family and his associates. De Lima said it would be the Office of the Ombudsman that would, if warranted, recommend impeachment cases against Binay in the House of Representatives.

Now you can steer clear of accidents on your way to your destination. Metropolitan Manila Development Authority (MMDA) Chair Francis Tolentino said that starting Friday, Android users can download the application "MMDA Accident Alerts" on their cell phones to get real-time updates on road accidents in the metropolis.

The app will also provide information about which streets are flooded or undergoing reblocking. The covered areas will be based on the MMDA Traffic Navigator setup which includes the stretch of EDSA, C-5, South Luzon Expressway, Roxas Boulevard, Quezon Avenue, España Boulevard, Ortigas Avenue, Commonwealth Avenue, and Marcos Highway. An iOS version will soon be available for download.

The Supreme Court is overhauling its notoriously slow judicial system to speed up the resolution of cases from years to mere days, Chief Justice Maria Lourdes Sereno said Thursday. Sereno said she would hire more trial court judges, hasten legal procedures, and press authorities to enforce court rulings to clear a backlog that burdens judges with as many as 4,000 cases at a time.

"We want to say that in the Philippines, it’s no longer justice delayed and therefore justice denied," said Sereno. "We want people to experience justice in real time, justice on time."

We’ve updated our neighborhood guide of this bustling hub in the South. Check it out for a great lineup of eats and activities.