A stripping Channing Tatum, Pacquiao on the basketball court, and more. 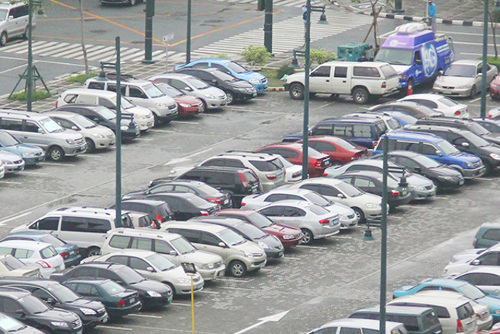 Here’s some hopeful news. A bill has been filed in the House of Representatives that would protect customers of malls, shops, and other establishments from "unjust and excessive" parking fees. Under House Bill No. 5099, or the proposed "Parking Fees Regulation Act," Valenzuela City Representative Sherwin Gatchalian wants parking fees waived or lowered to a standard rate.

Under his proposal, customers who purchase at least P1,000 worth of goods or services would have their parking fee waived, provided that the parking space was used for three hours or less. He also proposed a standard parking fee of P40 per vehicle for up to eight hours and an additional P10 for every succeeding hour. A one-time fee of P100 per vehicle would be imposed for overnight parking.

Catholic bishops scrapped their landmark welcome to the LGBT community Saturday (October 18). The bishops approved a final report covering various issues related to Catholic family life, but failed to reach a consensus on a watered-down section on the LGBT community.

A revised paragraph referred to homosexuality as one of the problems Catholic families face, saying "people with homosexual tendencies must be welcomed with respect and sensitivity," but repeated Church teaching that marriage is only between a man and a woman. The paragraph failed to reach the two-thirds majority needed to pass.

It’s a very real and very old Magic Mike. Check out this 1999 footage of Channing Tatum performing in an establishment called "Male Encounter" under the name "Chan Crawford." Tatum worked at the Florida nightclub for over a year, where he was "shy at first, but really knew how to work the stage." It’s probably worth noting that the video contains a neon thong.

4. 79 percent of Pinoys want Binay to face the Senate

Majority of Filipinos want Vice President Jejomar Binay to face the Senate Blue Ribbon subcommittee probe into the alleged overpricing of the Makati City Hall Building II, a Social Weather Stations (SWS) survey said. The September 26 to 29 SWS survey said 79% of 1,200 respondents agree that the Vice President should face the Senate and answer allegations of corruption.

Update: According to the Philippine Daily Inquirer, Binay’s spokesperson has said that the Vice President still won’t attend the Senate hearing, despite the results of the SWS survey. "There are other venues where the Vice President can address the baseless allegations and lies-venues where there is no other agenda except arriving at the truth," Cavite Governor Jonvic Remulla said in a statement.

Justice Secretary Leila de Lima wants US Marine Private First Class Joseph Scott Pemberton to personally appear in the preliminary investigation on the killing of transgender woman Jeffrey "Jennifer" Laude. The statement, issued Monday, comes after an announcement from the US Embassy that Pemberton may or may not appear in the scheduled preliminary probe on Tuesday, depending on the advice of his Filipino lawyer, Benjamin Tolosa Jr.

De Lima said there have been instances in the past when a respondent had opted not to appear in a preliminary investigation and would just submit a counter-affidavit. "Pero ang alam ko, hindi iyan basta-basta pinapayagan unless may compelling reason bakit ayaw humarap," she said, adding that there seemed to be no reason why Pemberton should not appear before the city prosecutor.

6. Nigeria expected to be declared Ebola-free

Nigeria is expected to be declared Ebola-free on Monday, just three months after fears that the virus could spread like wildfire through Africa’s most populous nation. The World Health Organization (WHO) is preparing to announce that Nigeria has not had a confirmed case of Ebola for 42 days (or two incubation periods of 21 days) just as it did for Senegal on Friday.

Close attention is being paid to how Nigeria, with an under-funded and ill-equipped health system, managed to contain the virus. "Nigeria acted quickly and early and on a large scale," said John Vertefeuille, from the US Centers for Disease Control and Prevention (CDC). "They acted aggressively, especially in terms of contact-tracing."

World boxing champion Manny Pacquiao launched his pro basketball career on Sunday in a scoreless debut. Not only was he the oldest and shortest player on the floor, but he also had two turnovers and a foul as starting shooting guard for the Kia team. When asked about his performance, he answered, "It doesn’t matter. What is important is the team won."

Pacquiao said he was preoccupied with his defense of his World Boxing Organization welterweight title against undefeated American Chris Algieri in Macau in November. He added that he would not play basketball again until after the Macau bout. "After the fight I should be able to play properly," he told reporters.

We’re in the mood for pretty this week. Among our fun finds: a tape dispenser shaped like a cocktail, scissors shaped like the Eiffel Tower, and floral passports that have us gearing for our next trip.

About 70,000 survivors of Super Typhoon Yolanda will finally have new homes next year, the Philippine Red Cross said over the weekend. Red Cross Chairman Richard Gordon said they are sending galvanized iron (GI) sheets and construction materials for the houses of Yolanda victims in Leyte, Cebu, and Ormoc. Each province will receive P38.2 million worth of GI sheets for the affected families.

10. 10 Fast-food Items From Around the World That We Need to Have Now

From Domino’s pasta in pastry cups to Burger King’s Chili Cheese Nuggets, we’ve listed 10 fast-food items from around the world that we’re just dying to try.