George R.R. Martin quizzed on his books + more things you might have missed today

An inside look at Binay’s "museum" house, a SPOT.ph exclusive with John Lloyd Cruz, and more. 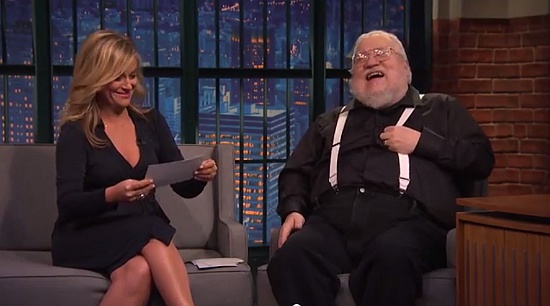 Author George R.R. Martin of A Song of Ice and Fire fame recently stopped by Seth Meyers’ show, Late Night to talk about his new book, The World of Ice and Fire. Meyers and guest Amy Poehler, both big fans of the author, took the opportunity to quiz him on how much he actually knows about his characters. You’d be pretty surprised.

The head of the Bureau of Immigration (BI) on Thursday said the Board of Commissioners has signed the order approving the voluntary deportation of Marc Sueselbeck, fiancé of slain Jennifer Laude. In a statement, BI Commissioner Fred Mison said there is no more legal impediment for Sueselbeck’s deportation since the Armed Forces is no longer initiating any criminal complaint against the German national.

Journalist Raissa Robles on Thursday showed photos of Vice President Jejomar Binay’s house, which she described was "like a museum." When asked why she took photos, Robles said she likes going to museums and she "felt that these were very good sculptural pieces."

Asked how she would describe the dining room, she answered, "It’s a dining room of a politician." The photos also showed glass bowls with tags labeled "Batangas" and "Alfonso." Binay earlier denied that he has property in Rosario, Batangas and Alfonso, Cavite.

According to Radar Online, actress Jessica Biel is pregnant with her first child. This will be the first child for her and husband Justin Timberlake. A source close to Biel revealed that she is reportedly three months pregnant and is due to give birth in April.

President Benigno Aquino III on Wednesday approved the P170.9-billion master plan to rebuild areas devastated by supertyphoon Yolanda, almost a year after it devastated parts of central Philippines. Communications Secretary Herminio Coloma Jr. said the 8,000-page masterplan will "bring forth the recovery" of 171 Yolanda-hit local government units in six regions of the country.

The comprehensive plan, which was submitted to Aquino last August, focuses on four areas of rehabilitation for Yolanda survivors: livelihood, resettlement, social services, and infrastructure. Coloma said resettlement will require P75.6 billion, the biggest funding requirement among the four areas.

6. Manila transportation 10th most dangerous in the world for women

Of the 16 most populous capitals in the world, Manila ranks 10th in the list of most dangerous transport systems for women. In a study released Thursday commissioned by the Thomson Reuters Foundation and polled by YouGov, the capital is also ranked seventh worst in terms of whether Filipino women respondents feel safe traveling alone at night.

There are more reports of physical harassment (such as groping) in Manila than in six other cities. It also landed 11th worst in availability of safe public transport.

The latest designer collaboration from H&M is coming to our shores. Alexander Wang x H&M will be available locally starting November 6, with the first 10 customers to receive a commemorative book called The First 10 Years. The limited-edition book traces the history of H&M’s famous collaborations with designers like Jimmy Choo and Lanvin. The book will not be sold in the Philippines.

8. On the Spot: 10 Magical Questions for John Lloyd Cruz

In an exclusive interview with SPOT.ph, the star talks to us about karaoke songs, magical powers, and more. Oh, and he draws a self-portrait for us, too.

Senator Juan M. Flavier, one of the most popular and respected public servants, died just past 4 p.m. on Thursday, succumbing to multiple organ failure brought about by pneumonia. He was 79. Among his contributions in public office include stricter anti-tobacco measures and a multi-vaccine national immunization program. He also authored legislations such as the Anti-Poverty Law which created the National Anti-Poverty Commission,the E-Commerce Law, and the Indigenous People's Rights Act.

10. Things to Do This Weekend: Where to Go for a Halloween Staycation

Skip the tricks and go straight for the weekend treats this Halloween with our handy list of the best staycation offers and deals in the metro.