Free WiFi in UP campuses, Iggy Azalea as Brittany from "White Chicks," and more. 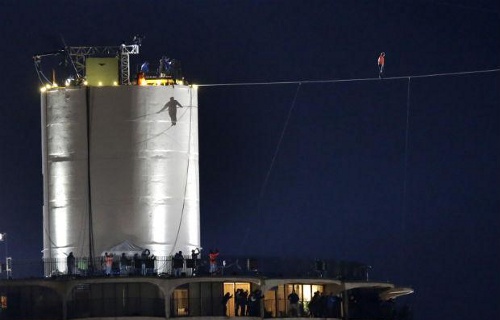 Daredevil Nik Wallenda set the world abuzz Sunday when he crossed two skyscrapers on a tightrope without a safety net or harness. Thousands of cheering fans packed the streets around Chicago’s Marina City towers to watch the 35-year-old complete the back-to-back walks, including one wearing a blindfold. The incredible spectacle was telecast with a seconds-long delay on the Discovery Channel so producers could cut away if Wallenda fell. We’re relieved he didn’t.

President Benigno Aquino III is scrutinizing the performance of Vice President Jejomar Binay as a member of his Cabinet amid corruption allegations against Binay and his family, Malacañang said on Sunday. Akbayan Representative Walden Bello, a key ally of the administration, said the President should fire not only Binay but also Agriculture Secretary Proceso Alcala, Agrarian Reform Secretary Virgilio de los Reyes, Philippine National Police Director General Alan Purisima, and Budget Secretary Florencio Abad to restore the credibility of his reform program.

"We cannot have [a] double standard by condemning Vice President Jejomar Binay while tolerating administration allies involved in the [Janet Lim-]Napoles [pork barrel] scam and the [Disbursement Acceleration Program, or DAP]. [A] Double standard has a tremendously corrosive effect on civic morality," said Bello in an interview.

Former NBA player Allen Iverson arrived in Manila on Monday morning for a basketball clinic and charity game. Iverson earlier told fans that sport agent Sheryl Sanchez Reyes will give away 100 tickets for an "All In Basketball Game," a charity event for Gawad Kalinga on November 5 at the SM Mall of Asia Arena.

Typhoon "Paeng" (Nuri) is expected to exit the country on Tuesday evening, the Philippine Atmospheric Geophysical and Astronomical Services Administration (PAGASA) said on Monday. Paeng was last observed 1,135 kilometers east of Tuguegarao City. Elvie Enriquez of PAGASA said the typhoon was not expected to make landfall and its effects would not be felt in the country.

Taylor Swift’s new album, 1989 is slated to reach a whopping 1.3 million sales in its opening week. If projections are right, she would have the best-selling week since Eminem’s The Eminem Show in 2002. Official numbers are expected to come in by Wednesday.

6. UP campuses to get free WiFi hotspots from Smart

University of the Philippines and Smart Communications have recently signed a memorandum of agreement wherein the telecommunications company will provide free wireless connectivity to all UP campuses around the country.

Senate President Franklin Drilon on Monday assured he won't block any Senate initiative to investigate the allegedly overpriced Iloilo International Convention Center. In a statement, he said he would never use his position as Senate President "to block or prevent the holding of a Senate Blue Ribbon Committee inquiry into the matter."

"I have nothing to hide. Any inquiry or investigation will validate the facts and figures of this project, and will just show how absurd these vile allegations really are," he said. Drilon added, however, that it was only proper that those who were responsible for spreading lies regarding his connections to the Convention Center "must be made liable for their actions if their allegations were proven wrong and politically motivated."

Check out your favorite Hollywood celebrities go all out for Halloween. Yes, this includes some famous celebrity babies, too.

A preview of the indies, documentaries, and award-winning heavyweights featured in this year's Quezon City Film Festival from November 5 to 11.

This week, we’re loving bright hues and fashionable finds. This includes a nifty jacket gripper, some handy pens, and picture holders that are perfect for instant photos.