Papal souvenirs, a new trailer for a Minions movie, and more. 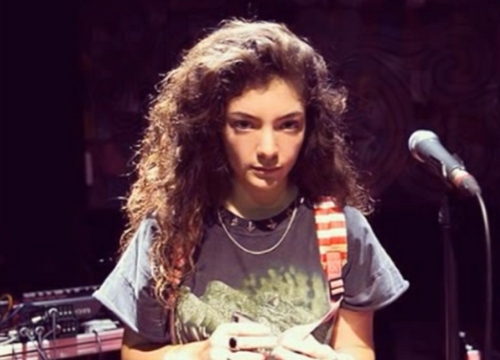 1. See Lorde at 12 years old singing Kings of Leon’s "Use Somebody"

Musical sensation Lorde (whose real name is Ella Yelich-O'Connor) proves yet again that she already had much talent years before releasing her hit song "Royals." An audio clip of the teen has emerged where she sings Kings of Leon’s 2008 single "Use Somebody" for a local radio station in New Zealand. The ballad has been covered by different artists, but none of them quite like Lorde’s rendition.

Excited about Pope Francis’ arrival on January next year? You can now prepare for the papal visit with some official paraphernalia as the Archdiocese of Manila has begun selling souvenirs online for the event. Some of these items include T-shirts, umbrellas, rosaries, and mugs in different designs. According to Radio Veritas, 24 percent of Filipinos wish to hear Pope Francis' take on controversial issues such as same sex marriage and the out-of-school youth.

3. Palace leaves decision to resign from Cabinet in Binay’s hands

President Benigno Aquino III has said that it is still up to Vice President Jejomar Binay if he wants to resign from the Cabinet. According to Communications Secretary Herminio Coloma Jr., there has been no official order from the president asking Binay to give up his roles as head of the Housing and Urban Development Coordinating Council (HUDCC) and Presidential Adviser on OFW (Overseas Filipino Workers), despite calls from the public for his resignation. The president previously said that Binay is "free to leave the Cabinet" if they no longer share the same principles.

Coloma added, "The President has spoken about the vice president's work as member of the Cabinet and only Vice President Binay can answer that question."

11 months after Brittany Maynard was diagnosed with brain cancer, the public face of the "death with dignity" movement in the US ended her life last Saturday at 29 years old. Last April when the prognosis declared she only had around six months to live, Maynard wrote that there was no treatment for her disease and that "the recommend treatments would have destroyed the time she had left." Earlier on in October and a few days ago, she released a video promoting her advocacy that earned more than 13 million views.

5. Stage dad Gringo supports daughter in The Voice of the Philippines

Reality show contestant Kai Honasan turned four chairs on The Voice of the Philippines, and her father, Senator Gringo Honasan, could not have been prouder. Senator Honasan went up on stage and spoke to the coaches, saying "We just prayed and hoped that the audience would appreciate my daughter’s message, whatever the results are." The young classical pianist and ukelele player chose Bamboo Manalac as her coach.

Typhoon "Paeng" made an exit from the Philippine Area of Responsibility (PAR) this morning at 11 a.m. after leaving intense rains in its wake. In PAGASA’s 5 a.m. weather forecast, "Paeng" was at its strongest at maximum sustained winds of 195 kph near the center and gusts of 230 kph.

7. UP Baguio gets second bomb threat of the year

Students and employees of the University of the Philippines-Baguio evacuated the campus after a reported bomb threat on Tuesday morning. Teachers and students of the College of Arts and Communication received the message via text at 9 a.m. Tensions were diffused before noon when police bomb experts found no evidence of explosives inside the campus. Students and teachers were ordered to return to school shortly afterwards.

8. WATCH: Trailer for Minions, the spinoff to Despicable Me

The tiny yellow rascals from Despicable Me are at it again, and they’re going international -and back in time. Minions opens on July 10, 2015, meaning there's still plenty of time to plan for this movie outing.

9. 10 Politico Lines You Can Use for Everyday Problems

Late for work? Someone disagreeing with you? Messed up big time? Borrow some lines from our very own politicians to add flavor to your life’s grievances.

10. 10 Craziest Excuses You’ve Ever Given a Traffic Cop

We’ve all done it before, whether it be an emergency bathroom trip or a school deadline. We’ve compiled 10 crazy excuses for getting out of a traffic violation.  Don’t forget to share yours in the comments section!