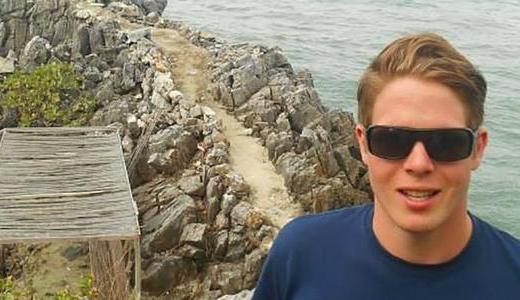 1. Man searches for woman with his ex's name to travel with

If your name is Elizabeth Gallagher, then you’re one step closer to getting a free ticket around the world for Christmas. Jordan Axani is a 27-year-old Canadian who recently broke up with his girlfriend, but not until after he had already bought tickets for their big holiday trip. The Torontonian says that getting a name changed for a plane ticket is "impossible" and wants to take somebody to eight different destinations, from New York to Bangkok, just as long as they have the same name as his ex-girlfriend and a Canadian passport.

The House of Representatives has passed House Bill 5068, "an Act institutionalizing the grant of student fare discount privileges on public transportation and for other purposes"on its third and final reading today. The bill seeks to give students a 20% discount on regular domestic fares for all forms of public transportation provided they present valid IDs or enrollment forms. The discount is only valid on school days, and students may file complaints with the corresponding agency if they are denied.

After the premier of the comedy film Beauty in a Bottle in theaters nationwide, Skylight Films and Quantum Films has released the movie’s blooper real. Watch the film's stars Angelica Panganiban, Assunta de Rossi, and Angeline Quinto in funny and light moments during filming.

Joshua Aquino reportedly got Botox injections, admitted his mother Kris Aquino. While the procedure is typically given to older patients who want to get rid of their wrinkles by temporarily paralyzing facial muscles, the 19-year-old got the injections for his armpits to control excessive sweating. "Oh my God, nagwo-work talaga ’yung Botox sa kili-kili kay Josh. It really stopped," said Kris on her morning show Kris TV.

Vice President Jejomar Binay spoke to delegates of the Boy Scouts of the Philippines (BSP) asking them to treat him as an ordinary citizen and not as, he says, "Jojo Binay, our country's Vice President, who is being forcibly crucified and punished for sins made up by detractors and deceivers." The VP is currently facing allegations of corruption, but declined to neither talk about politics nor accept media interviews after his speech.

Celebrity couple Gerald Anderson and Maja Salvador share the secret to their strong relationship. Anderson believes that it's important to be a gift to each other, and Salvador agreed, saying, "Every day, maganda naman na tuwing makikita ko siya at magpaparamdam siya eh isang magandang regalo yon para sa akin." The two are working together for the first time on ABS-CBN’s upcoming Christmas special Give Love On Christmas Presents: Gift of Life.

7. Beyonce is the highest paid woman in music according to Forbes

Forbes magazine has named Beyonce as the highest paid woman in music in 2014, with her estimated earnings of $115 million-double the amount that she pulled in last year. The musical superstar secured her spot ahead of Taylor Swift with $64 million, Pink with $52 million, Rihanna with $48 million, and Katy Perry with $40 million.

Jimmy Kimmel continues his yearly tradition of having parents tell their kids they've eaten all their Halloween candy, and the best ones have been picked out. The video shows children throwing tantrums and giving their parents some sass over taking away their sweet treats.

Dr. Conrado "Bobby" Gempesaw is the first layperson head of St. John’s University, a 144-year-old Catholic university in New York. The Davao City native is the 17th president of the institution, making it truly historic, as the 16 that preceded him were all Vincentian priests.

10. 10 Things the LTFRB Could Be Busy With Instead of Uber

Add your ideas, too! We made a list of things that the Land Transportation Franchising and Regulatory Board could be concerning themselves with instead of Uber. You know, like buses catching fire.