A first look at the famous urban legend's "mall snake" from Shake Rattle and Roll XV + more things you might have missed today
Loading
Already a member? Log in
No account yet? Create Account
Spot.ph is your one-stop urban lifestyle guide to the best of Manila. 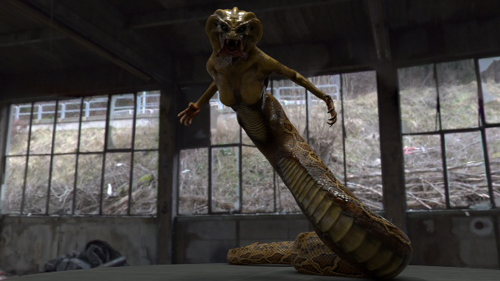 Last month, the teaser trailer was released for Shake Rattle and Roll XV, whose one episode entitled Ahas features a memorable shopping mall urban legend. Portraying the half snake-half woman character is Erich Gonzalez. The film is set to drop as part of this year’s roster for the Metro Manila Film Festival, and will include two other horror-themed episodes.

Have you met Alex from Target? His quick rise to fame was no accident, according to a Huffington Post article. Dil-Domine Jacobe Leonares is the Filipino-American CEO of Breakr, a marketing company that claims to have set up the whole thing in order to measure the fangirl demographic. According to Leonares, one of the company's "fangirls" posted the famous photo on Twitter while the company encouraged girls to share the photo with the #AlexFromTarget hashtag.

Judy Ann Santos is hoping for a reunion of her defunct hit show Gimik after fellow actress Jolina Magdangal’s return to ABS-CBN. Santos is looking forward to reliving their memories together, and she says she’s happy for Magdangal and her leading man Marvin Agustin, who has also returned to the Kapamilya Network.

The US Marine who allegedly killed Filipino transgender Jennifer Laude will be subjected to a forensics examination today at a still undisclosed location. US Marine Private First Class Joseph Scott Pemberton is being held inside a detention facility inside the Armed Forces of the Philippines headquarters in Camp Aguinaldo, Quezon City.

That’s so fetch! A decade after Mean Girls, the movie’s actresses were invited by Entertainment Weekly for a photo shoot to talk about their memorable behind-the-scenes moments and what they think their characters would be doing now. Safe to say Lindsay Lohan, Rachel McAdams, Lacey Chabert, Amanda Seyfried, and Tina Fey had a lot to say to each other.

6. Republican-controlled US Senate beneficial to PH

Disney’s Into the Woods is quickly gaining popularity after the release of its first trailer, and the one that came after it packs even more excitement. The film is a twist on the beloved Brothers Grimm fairy tale mixed in with humorous and heartfelt musical performances and is set to drop in cinemas early next year. Watch the new trailer to see how Meryl Streep fares with her witchy pipes.

"I wish them only the best," are Daniel Matsunaga’s words regarding his ex-girlfriend Heart Evangelista and her fiancée Senator Francis "Chiz" Escudero. The Pinoy Big Brother: All In winner says he would attend their wedding, but only if he is invited. As for Matsunaga himself, he has been happily single for two and a half years.

The late Juan Flavier touched the lives of many people, and among them was Sandra Magalang. In the guest book of Flavier’s wake, the young woman wrote: "Without him, I could not have achieved the honors I have achieved, and his health programs have helped me reach places I never thought I would." Magalang was this year's Salutatorian of the UP College of Law and has just finished taking the Bar Exams.

10. 10 Surprising Celebrity Talents That Will Amaze You

Some actors just love to jump out of the screen and show you what else they’re made of. Think you can’t swoon any harder at Ryan Gosling? Think again. Which other multi-talented celebrities do you know of?