Nicki Minaj criticized for her new music video, the winners of the 2014 MTV EMAs, and more. 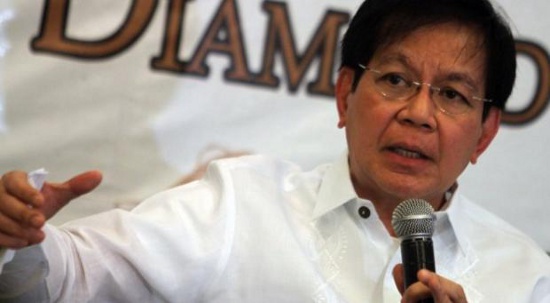 Secretary Panfilo Lacson, Presidential Assistant for Rehabilitation and Recovery (PARR), on Monday said Tacloban City Mayor Alfred Romualdez is to blame for the city’s "below par" rehabilitation after Yolanda. "This is surprising because it has been the center of international and national aid," he said.

He also said that Romualdez refused help from the national government and his attitude was unlike those of other mayors who "despite being leaders of the political opposition, allies, but not in the inner circle, were able to undertake significant accomplishments."

The camp of Vice President Jejomar Binay is unfazed by a report that an official of the Catholic Bishops’ Conference of the Philippines (CBCP) does not want him to become president. United Nationalist Alliance (UNA) Interim Secretary General JV Bautista said the Binay camp continues to respect leaders of the Catholic Church but said that the law must be followed when it comes to leadership succession and that the Vice President must take over if anything happens to the President.

Fr. Edu Gariguez, CBCP National Secretariat for Social Action executive secretary, earlier said he does not want President Aquino to resign because Binay would be a worse leader.

Lawyer Harry Roque, the lead counsel of the family of slain transgender Jennifer Laude, has filed contempt charges against Armed Forces of the Philippines (AFP) Chief of Staff General Gregorio Pio Catapang and his spokesperson Lt. Col. Harold Cabunoc. The AFP earlier filed a disbarment case against Roque for the incident inside Camp Aguinaldo where US Marine Private First Class Joseph Scott Pemberton, the principal suspect in the killing, is detained.

Roque said he will also file graft and administrative charges against the officials for allowing Pemberton to remain in US custody.

4. Matt Damon will reprise his role as Jason Bourne

Matt Damon confirmed his return to the popular action franchise on Monday, after the original director Paul Greengrass announced he will be directing the fifth installment. Universal, on the other hand, is currently developing an untitled film set in the Bourne world with Jeremy Renner returning to play Aaron Cross and Justin Lin to direct. The movie is currently slated for July 2016, though it's unclear if that film will push through or if Damon’s flick will take its place.

Rapper Nicki Minaj has been accused of using Nazi imagery and "glorifying Hitler" in the newly released video for her song "Only," which also features Chris Brown, Drake, and Lil Wayne. The animated video, which features Minaj as a dictator, shows an army of soldiers wearing red armbands reminiscent of those worn by the Nazis, while large red banner flags appear with a symbol in a design eerily similar to a swastika. Minaj has yet to respond to the criticism.

Esquire Philippines clarified on Monday its "Yolanda" issue cover photo featuring Interior and Local Government Secretary Mar Roxas after it drew flak from Facebook users, particularly those from the Yolanda-hit city of Tacloban. In a statement on their Facebook page, Esquire said, "Secretary Mar Roxas is on the cover as a symbol of the national government response. Nothing less or more. We were certainly not paid or persuaded to put him on the cover. (The photo itself was taken a year ago, at the Tacloban port; this was not from a specially arranged Esquire shoot and is not to be misconstrued as an endorsement.)"

They further added that their goal in the issue is to draw attention to the situation in Tacloban.

It was a big night for Katy Perry, Ariana Grande, and One Direction at MTV's 2014 Europe Music Awards, which took place on Sunday in Glasgow, Scotland. Perry bagged the "Best Video" award for her song "Dark Horse," while Ariana Grande took home the awards for "Best Female" and "Best Song." Boyband One Direction, on the other hand, won for "Best Pop," "Best Live," and "Biggest Fans."

The Department of Agrarian Reform (DAR) on Monday said it has started investigating the 350-hectare estate being linked to Vice President Jejomar Binay amid a call by Senator Miriam Defensor Santiago that the land should be distributed to farmers. In an interview, DAR Secretary Virgilio delos Reyes said it is possible for government to seize the land if the original owners violated the Agrarian Reform Law.

A lot has changed since our list was first made. This time, we’ve discovered two filmmakers, performance artists, and more creative minds that keep the art world exciting.

10. 10 Fresh Tunes to Listen to This November

The year is coming to a close, but artists are not holding back on their releases. This November, our playlist suggestions include new tracks from Chvrches, OK Go, a cool collaboration between Calvin Harris and Haim, and more.