Reminder: Bird hunting is banned on UP Diliman campus

Before you even crack the joke: this is about birds that fly, not birds that stand to attention. On Tuesday (November 11), the Philippine Daily Inquirer reported about a Facebook post made by the founding members of the Wild Bird Club of the Philippines, Lu-Ann and Amado Bajarias Jr.

The Bajarias couple shared a photo of three men holding a Black Bittern, a rare bird that was last spotted in campus on 2008. According to Lu-Ann Bajarias, more than arresting these men, they are hoping that the administration enforces a stricter "No Hunting" policy.

Amado Bajarias posted a photo of the Black Bittern on his Facebook page, with this caption: 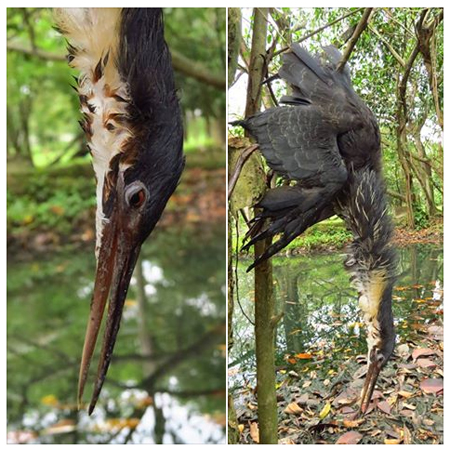 "Lu-Ann and I saw a group of men kill a Black Bittern (Dupetor flavicollis) in U.P. Diliman earlier today. Really senseless act of violence. This species is uncommon in the Philippines and extremely rare in the campus (the last documented sighting in the campus that I know of was in 2008). It should be a source of pride for U.P. Diliman that there’s a Black Bittern in its grounds! We reported the killing and showed the photos to two guards. I really hope U.P.’s guards understand that the place is a sanctuary for wildlife, and understand the concept of respecting wildlife. I hope the U.P. leadership does something to protect more effectively the wildlife that seek shelter in its grounds. What a waste of life."

In response, Campus Maintenance Office Alden Aynera said, "The UP campus abides [by] the national law on this. Endangered species, migratory birds, even trees should be protected."

Bird Hunting Updiliman
Your Guide to Thriving in This Strange New World
Staying
In? What to watch, what to eat, and where to shop from home
OR
Heading
Out? What you need to know to stay safe when heading out