Stylish rain-proof bags, Jared Leto could be the new Joker, and more. 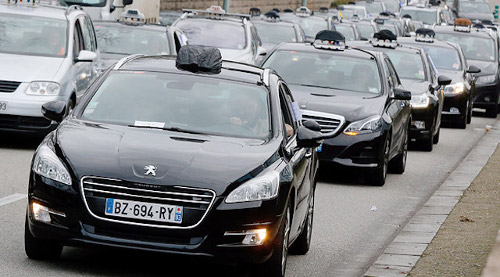 1. VP Binay backs out of debate vs Trillanes

Vice President Jejomar Binay has backed out of a debate with Senator Antonio Trillanes IV scheduled on November 27, despite challenging the latter in the first place. Binay said he changed his mind after accusing the senator of trying to show himself as the underdog in the November 27 event. He said his decision to back out of the debate is final.

Celebrity couple Marian Rivera and Dingdong Dantes travelled to the deserts of Dubai to shoot what seemed to be their prenuptial photos. All their Instagram posts were captioned with the hashtag #journeytoDday.

Here’s some good news. The Land Transportation Franchising and Regulatory Board (LTFRB) and car service provider Uber have found common ground in efforts to regulate "vehicle for hire" services in the country Tuesday. LTFRB has agreed to review and update its set of rules for vehicle-for-hire operations to accommodate modern solutions such as Uber. Uber, on the other hand, has agreed to present government reforms implemented in other countries to modernize the Philippines' land transportation regulations.

4. The original Pink Power Ranger performs a street concert in her old costume

How about Throwback Tuesday? Remember the Power Rangers? Amy Jo Johnson, who played the Pink Ranger on Mighty Morphin Power Rangers, donned her familiar pink suit in a live concert to thank fans for helping her film The Space Between reach its goal on Indiegogo.

Johnson played guitar and sang on the streets of Toronto on Friday while wearing the outfit. The idea for the performance was hatched by Johnson’s friend David Yost, who also played the Blue Ranger on the fondly remembered ’90s series.

Meryl Streep and Stevie Wonder are among the latest Americans tapped to receive the Presidential Medal of Freedom, President Barack Obama announced Tuesday. The medal is the highest honor granted to civilians in the US and honors contributions to US security, world peace, and cultural achievement.

6. Romualdez to Lacson: "You should resign"

Tacloban Mayor Alfred Romualdez on Tuesday called on rehabilitation czar Panfilo Lacson to step down from his post, saying he was disappointed by the way the former senator criticized him for the slow pace of Yolanda rehabilitation efforts in his city.

In an interview, Romualdez said, "If you cannot fulfill your duties as a coordinating body-I don’t know why you’re named czar; you’re not a czar, you’re just a coordinating body... If you cannot fulfill your function... I think you should resign [from your position]." He also added, "If you have political agenda, which is very clear, we’re not gonna get sucked into that. People here in Tacloban have suffered enough."

7. Jared Leto as the new Joker? It could happen

Jared Leto is being targeted to play the Joker in the upcoming Suicide Squad movie by Warner Bros. Other actors who might also take on roles in the movie include Tom Hardy, Will Smith, and Margot Robbie. Jesse Eisenberg, who will play Lex Luthor in the highly anticipated Batman vs. Superman: Dawn of Justice, is also expected to play Luthor in the movie. Suicide Squad is slated for an August 2016 release.

When our temperamental weather strikes, it’s time to leave the designer bags at home and go for something that can stand a little splash. Check out our list of bags that are functional and durable.

There are fries, and then there are truffle fries. If you’re craving something extra special, we’ve ranked the best in Manila: not too overwhelming, pleasing to the palate, and worth coming back for.