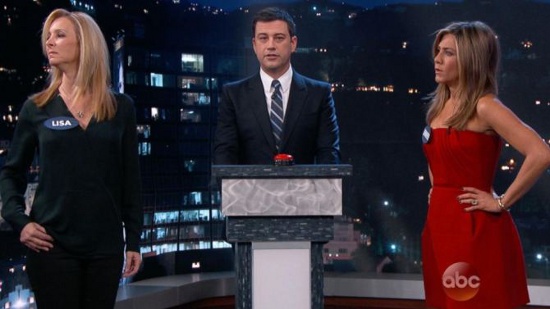 (SPOT.ph) Busy day, Spotters? We quickly round up 10 things you might have missed while you were off the radar.

1. Jennifer Aniston and Lisa Kudrow curse each 0ther out on Jimmy Kimmel Live!

There was a mini-Friends reunion Wednesday, but it wasn’t entirely friendly. Former Friends co-stars Jennifer Aniston and Lisa Kudrow were both guests on Jimmy Kimmel's show where they waged a vicious war of words called "Celebrity Curse Off." Each actress was given five seconds to come up with a jaw-dropping vulgarity until one of the women failed to deliver a shocking response.

2. An alternative payment for SLEX, other tollways

Hassaram hopes that the card will alleviate consumer hassle when transacting with bills and coins.

China responded cautiously on Tuesday to news of Vietnam’s two most powerful warships making their first ever port of call in the Philippines, but hit back at Manila for fining several Chinese fishermen boats for poaching, saying the decision "violated China’s sovereignty."

Both Vietnam and the Philippines are locked in territorial disputes with China, which lays claim to almost the entire South China Sea. China has protested against the arrests, saying it does not recognize their trial and that the fishermen were detained in China’s territorial waters.

House Speaker Sonny Belmonte repeated his previous defense of the 2015 budget when it was approved at the Lower House amid criticism that it had hidden pork barrel funds. He maintained that the bill approved by the House adhered to the Supreme Court ruling against the PDAF system, which barred lawmakers from exercising discretion over lump sums after it has been enacted by Congress through the budget law.

The Speaker said lawmakers itemized the projects in the budget, saying, "Ang sinabi ng Supreme Court in their decision against PDAF ay lump sum without any indication what they are going to be used for."

Senator Jinggoy Estrada left detention in Camp Crame Wednesday morning to undergo physical therapy at the Cardinal Santos Memorial Hospital in San Juan City. The court said Estrada, who is detained for plunder charges in connection with the alleged misuse of pork barrel funds, may leave detention twice a week for a two-hour therapy session starting November 25 up to the first week of December.

On Tuesday, the Sandiganbayan allowed Estrada to undergo physical therapy at the hospital after the senator complained of shoulder pains.

6. Senator Cynthia Villar does not want Manny to run for president again

If she had her way, Senator Cynthia Villar would not want her husband to seek the presidency again, saying, "Ako, mas gusto ko ng simpleng buhay, wala nang problema."

Villar was reacting to reports that former Senator Manuel Villar is among four contenders that the Nacionalista Party (NP) is considering to be its presidential candidate in the 2016 elections. The others are Senators Antonio Trillanes IV, Alan Peter Cayetano, and Ferdinand Marcos Jr. The senator said that so far, her husband has shown no interest in running again.

The Philippines will simplify its weather warnings to make them easier to understand in order to prevent the annual loss of hundreds of lives from natural calamities, officials said Wednesday. The state weather service of one of the world’s most disaster-prone nations is working with linguists to ensure that the threat posed by typhoons, floods and other events would be fully understood by people, they said.

"People need to be told in a language they can understand the dangers that they face," said Roberto Añonuevo, executive director of the government’s Filipino Language Commission.

8. The Juiciest Hollywood Hookups and Breakups of 2014

When it comes to matters of the heart, it’s kind of hard to keep up with the rich and famous. This year, we witnessed more than a handful engagements, weddings, and bad breakups. Here are 20 of the biggest hookups and breakups of Tinseltown.

Marikina is far from the chaos of the capital yet near enough for a daytrip via the LRT. From taking an architour to going on a burger run, there’s plenty to see and do in Marikina City for just a couple hundred pesos.

10. The 10 Types of Gifts You Receive at Christmas

Whether it’s the obligatory gift (oh great, another mug) or a gift certificate (hey, you have freedom to choose what to buy with this one), Christmas presents are one of the best parts of the holiday. Whatever you receive this Christmas, don’t forget to say thanks.