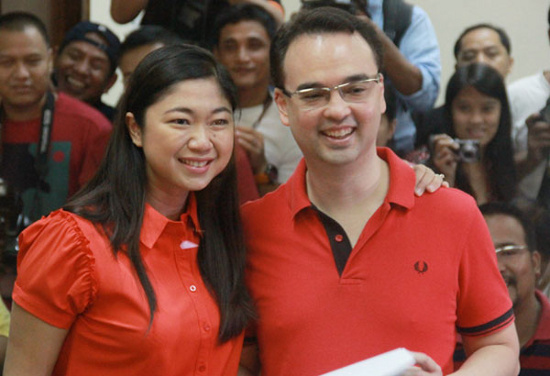 The Commission on Audit (COA) has asked Taguig Mayor Lani Cayetano to account for more than P317.4 million that the city government supposedly spent on salaries of its contractual employees, who seemed nowhere to be found. The COA also noted the "doubtful existence" of medicines and medical, dental, laboratory, and office supplies in the City Hall's inventory amounting to nearly P102.3 million.

Cayetano is the wife of Senator Alan Peter Cayetano, one of the three senators leading the Senate inquiry into corruption allegations against Vice President Jejomar Binay and his family.

2. Motorist roughs up MMDA traffic constable at intersection in QC

A Metropolitan Manila Development Authority (MMDA) traffic constable suffered abuse at the hands of a sports car-driving motorist who tried to make an illegal left turn at a busy street in Quezon City Thursday morning. The motorist, who is now being tracked down, drove a blue sports car without license plates, MMDA enforcer Rodolfo Fernandez said.

Fernandez said he then saw the driver yank the victim’s uniform, punch him in the face, and then accelerate the car without letting the MMDA enforcer go. Photos have indicated that the mystery sports car is a blue Maserati.

3. Drilon: If you can find pork in budget, go to SC

Senate President Franklin Drilon on Wednesday told those alleging that the pork barrel is present in the proposed P2.606-trillion 2015 budget to go to the Supreme Court, saying "[The issue] can always be brought back to the Supreme Court if there is such an issue [...] The budget is open to examination."

Drilon and Senator Francis Escudero, the chair of the finance committee, maintained that there is no PDAF in the 2015 budget. They said they could not trace the P37.3-billion pork barrel or lump-sum funds that Senator Miriam Defensor-Santiago has alleged to have been allotted to five agencies.

4. Binay on Trillanes’ presidential bid: "It made my day"

Vice President Jejomar Binay is unperturbed by reports that Senator Antonio Trillanes IV, one of his most vocal critics, may run against him in the 2016 presidential elections. "That's news. It made my day," he said. Trillanes on Tuesday said he is one of the four possible presidential contenders of the Nacionalista Party (NP) for the May 2016 polls.

Cavite Governor Jonvic Remulla, Binay's spokesman for political concerns, said Trillanes' latest pronouncement proves that the ongoing Senate Blue Ribbon subcommittee probe was meant to discredit the Vice President and ruin his chances for the presidency, saying, "It obviously shows that his [Trillanes] motives from the start were impure. It was never about the truth but about politics."

Plunder and graft charges have been filed against House Majority Leader Neptali Gonzales II over the alleged misuse of P315-million in pork barrel funds from 2007 to 2009. The group "Sentinels of the Rule of Law" filed the complaint on Thursday against Gonzales, a Mandaluyong City representative and party mate of President Aquino in the Liberal Party.

According to the 63-page complaint, the government has prosecuted opposition members in the pork barrel scam but has spared administration allies.

During a press conference at the Hotel Intercontinental in Makati City Thursday, Pacquiao said he was considering running for a position in 2016 but he first wanted to focus on the task at hand as the congressman of Sarangani province. "I'm considering it, 2016, but it's still too far away," Pacquiao said after his victory parade with Makati Mayor Junjun Binay. "My decision, though, is not yet final if I will run for a national position."

British boy band One Direction became the only group to score four consecutive No. 1 debuts on the US Billboard 200 album chart on Wednesday, ousting Taylor Swift from her chart-topping reign. One Direction’s latest album, Four, sold 387,000 copies in its first week, according to figures compiled by Nielsen SoundScan.

The band also made history on music streaming platform Spotify by scoring the most first-week streams after Four was streamed 11.6 million times in the United States and 30 million times worldwide.

8. Natalie Portman is in early talks to join the Steve Jobs movie

Natalie Portman is in early talks to be added to the cast of Universal’s biopic of Apple co-founder Steve Jobs, according to The Hollywood Reporter. The actress would co-star alongside Michael Fassbender, who is currently attached to star in the film. Sony Pictures had been working on developing the project, written by Aaron Sorkin, before Universal picked up the feature.

If your BFF is the kind of girl who loves a new addition to her makeup kit, you’re in luck! From holiday makeup to festively packaged skincare, we pick the holiday beauty products any cosmetics fan would love. Just make sure she doesn’t already have them.

Oh, how time flew! November is rapidly coming to a close and we wrap it up with the 10 best things we ate this month. From Scout Honor’s "The Inception" cookie to 22 Jupiter’s scallops with foie gras mushroom, it’s never too late to give these dishes a try.