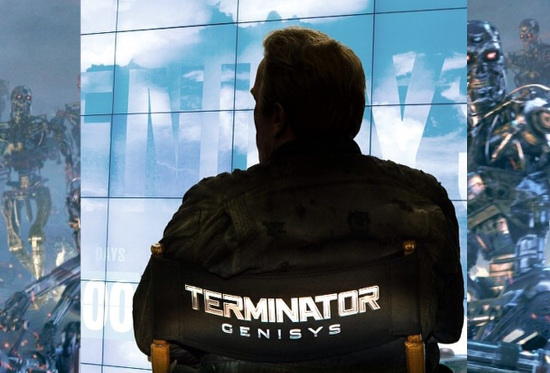 As promised, Arnold Schwarzenegger is back and he’s bringing Sarah Connor (Games of Thrones’ Emilia Clarke) with him. Genisys is the explosive first of three new Terminator films, set for release on July 2015. The movie follows 2009’s Terminator Salvation, which was the first film in the franchise to not feature the Governator.

2. Bianca Gonzalez and JC Intal get hitched in Palawan

It’s official! Bianca Gonzalez and JC Intal tied the knot on Thursday in El Nido, Palawan. In a previous interview, Gonzalez said they wanted to have a "laidback" wedding, and the couple earlier stated that their wedding would take place on December 10.

Senator Grace Poe urged President Benigno Aquino III "to immediately appoint a capable leader to run" the PNP during Director General Alan Purisima's suspension. "I hope for an immediate and orderly transition of leadership within the PNP to preserve public order and assure the people's security this holiday season," she said.

The Senate Committee on Public Order and Dangerous Drugs, chaired by Poe, has inquired into allegations linking Purisima to anomalies. Senator Sergio Osmeña III, meanwhile, called on Purisima to quit following the Ombudsman's order suspending him.

President Benigno Aquino III yesterday warned concerned government agencies that he would have no patience for excuses in failing to prepare for Typhoon Ruby. Speaking with members of the National Disaster Risk Reduction and Management Council (NDRRMC), Aquino said any failure in the performance of their duties would be "quite unforgivable."

"We are more experienced now [because of Yolanda] so we should be able to do more," he added. Aquino said each agency should check on one another to ensure that all the necessary preparations are in place.

The Department of Finance (DOF) is opposing a House measure seeking to exempt persons with disabilities (PWDs) from paying value-added tax (VAT) on certain goods and services. "The measure will expose government revenues to massive risks due to abuses and leakages. The long-standing international argument against VAT exemption is clear: proposals like this will result in tax administration problems and even compliance issues for the business sector," said the department.

The DOF continued, "For the tax administrators, clarifying and ensuring only PWDs avail of the exemption, and not unscrupulous individuals seeking to abuse the system, will be highly difficult." They also estimated the proposed VAT exemption for PWDs would lead to a revenue loss of P1.12 billion.

President Benigno Aquino III on Friday reminded media practitioners of the perils of "speculation" or erroneous reports on Typhoon Ruby, which has been described as "Yolanda-like."

"Up until yesterday at the NDRRMC (National Disaster Risk Reduction & Management Council) briefing, there was no indication or official analysis predicting that Ruby would be Yolanda-like in strength. At best, if Ruby struck, its strength would be more comparable to Pablo," he said. The President did not mention the name of the publication although it was the Philippine Daily Inquirer that published the article "Yolanda’-like ’Ruby’ heads for PH" on its December 3 front page.

8. Watch a parody of the new Star Wars trailer, to the style of Wes Anderson

The trailer for the latest Star Wars installment has already amassed more than 60 million views since it debuted last week. It has also racked up tons of parodies, including a re-edit in the cutesy, distinctive style of Wes Anderson. We’ve got to admit, it looks pretty good.

From the (sadly) relatable hugot to the unforgettable Chicken Sad, we listed the 10 hashtags that defined Manila in 2o14.

Still on the hunt for the perfect present? How about an entire basket of delicious goodies? We round up a list of yummy Christmas hampers, perfect for any recipient.