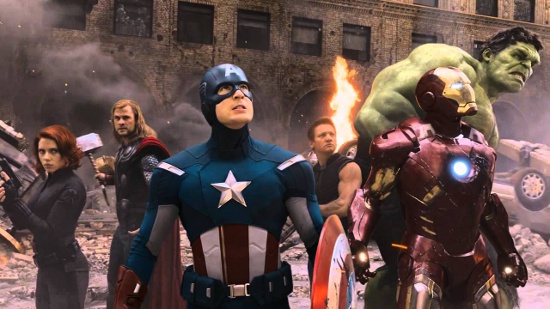 1. The Avengers assemble to wish you a Merry Christmas

Get into the holiday spirit with the Avengers! Video editor James Covenant put together movie clips from the Marvel Cinematic Universe to make it look like the world’s biggest superheroes are serenading you with "Joy to the World." Oh, and Groot also makes an appearance.

The teaser trailer for Star Wars: The Force Awakens has been viewed more than 60 million times on YouTube since its release on November 28. (Remember that cool lightsaber? Of course you do.) Creator George Lucas, however, wasn’t one of them. When the director was asked on his thoughts, he replied, "I don’t know anything about it. I haven’t seen it yet."

When he was then asked if he was curious about director J.J. Abrams’ vision, he replied, "Not really." But Lucas clarified his reasons for not seeing the trailer, saying, "I like going to the movies and watching the whole thing there. I plan to see it when it’s released." Besides, Lucas is also the film’s creative consultant. That doesn’t sound too bad.

PAGASA raised Signal No.1 over eight areas, including Metro Manila, Bulacan, Rizal, and Cavite as Tropical Storm Ruby weakened further. Ruby is expected to exit Luzon by Tuesday morning, and exit the Philippine Area of Responsibility by Wednesday evening.

The Philippine National Red Cross, meanwhile, said that the storm has left 23 dead so far but the National Disaster Risk Reduction Management Council (NDRRMC) confirmed only two deaths, according to a report on GMA-7’s 24 Oras.

Philippine National Police (PNP) Chief Director General Alan Purisima will ask the Court of Appeals to issue a temporary restraining order (TRO) against the Ombudsman’s decision to impose a six-month preventive suspension on him. "The TRO is the best remedy they see for the situation," said PNP spokesman Chief Supt. Wilben Mayor.

Purisima was suspended for his alleged involvement in an anomalous PNP contract with a courier service for the delivery of gun licenses.

Military teams from the United States, Japan, Singapore and Australia are helping the Philippines assess the damage caused by Tropical Storm Ruby to determine the foreign aid required. Major Emmanuel Garcia, commander of the AFP 7th Civil Relations Group said similar offers of military assessment teams were made by other countries, including Canada, the United Kingdom, Thailand, and China.

A Party-List representative is pushing for nationwide WiFi access. Delphine Gan Lee of the Party-List group AGRI has filed a measure that seeks to establish a municipal WiFi program, the cost of which would be shared 50-50 by the national government and the local government unit (LGU) concerned. Once built, the LGU may offer its constituents free use of the network. She added that investors and travelers would prefer to go to a town or city with online connection than to one without a WiFi network.

"They even offered their parking spaces for free, and for commuters to stay overnight for free. I look forward to the day...when during major calamities parking spaces would be utilized as an evacuation center. These are structurally sound, flood-free, well guarded, well ventilated, and designed to accommodate high traffic. It’s better than your classrooms," he said.

The Office of the Ombudsman has ordered Senate President Franklin Drilon, Public Works Secretary Rogelio Singson, Tourism Secretary Ramon Jimenez, and seven other public officials and private individuals to respond to the alleged overpricing of the Iloilo Convention Center (ICC).

Director Mothalib Onos of the Preliminary Investigation and Administrative Adjudication Bureau gave the respondents 10 days to answer the allegations made by former Iloilo provincial administrator Manuel Mejorada that they conspired to rig the bidding and overpriced it by as much as P500 million.

If you’re a fan of TV, there’s nothing more familiar than the time-honored tradition of Christmas-themed episodes. We zero in on funny (but heartwarming) Christmas episodes that still make us laugh with every rewatch.

Filipinos aren’t exactly tea drinkers, but we’re getting there. More and more non-hotel establishments are integrating this yummy afternoon habit into their daily practice. So if you’re looking for a relaxed post-lunch retreat, we give you 10 of the best.