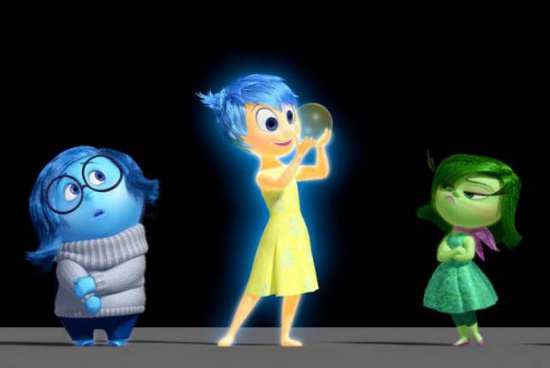 1. WATCH: The new trailer for Pixar’s Inside Out

Emotions literally come alive with Pixar’s newest animated film, Inside Out. The story takes us inside the minds of the characters, where different personified emotions like joy, anger, fear, and sadness compete for control inside their heads. Comedians Amy Poehler, Mindy Kaling, and Bill Hader star in the film slated for a summer 2015 release.

If you’ve always wanted Celebrity A to make out with Celebrity B, the New York Times Magazine may be the answer to your prayers. In the publication’s "Great Performers" issue, they paired 18 actors in nine scenes, with a video accompanying every scenario. The celebrities include Benedict Cumberbatch paired with Reese Witherspoon, Steve Carell paired with Laura Dern, Jack O’Connell paired with Shailene Woodley, Rosario Dawson paired with Jenny Slate, and more.

3. TIME names Ebola medics as "Person of the Year"

TIME magazine officially announced the "Person of the Year" on Thursday morning, naming the medics who treated patients stricken with the deadly Ebola virus. "The rest of the world can sleep at night because a group of men and women are willing to stand and fight," wrote TIME editor Nancy Gibbs.

According to the National Disaster Risk Reduction and Management Council (NDRRMC), the official death toll from Typhoon Ruby is now at 19 as of Thursday morning. The fatalities were from Calabarzon and Mimaropa in Luzon; and Western, Central, and Eastern Visayas.

Starting Thursday, the minimum jeepney fare in Metro Manila will be at P7.50, the Land Transportation Franchising and Regulatory Board (LTFRB) announced. The P1 decrease will also include discounted fare for students and senior citizens, who will now pay P6 for the first four kilometers.

6. New storm to be named "Seniang"

There is a low pressure area (LPA) building up somewhere east of Mindanao, and according to the Philippine Atmospheric, Geophysical and Astronomical Services Administration (PAGASA), if it enters the Philippine Area of Responsibility (PAR), the storm will be called "Seniang." According to the weather bureau, the LPA may enter the PAR late Thursday or early Friday.

Despite the sudden surge in ratings, Senator Grace Poe says she has no plans for presidency. Poe said that while she had thought of seeking the presidency, the "hardships endured by her father " when he decided to run for the country’s highest post stopped her. In a text message to reporters on Tuesday, Poe said her numbers in the Pulse Asia survey  were "truly heartwarming" but added, "There are still so much to do in the Senate that needs my full attention and efforts." [sic]

Many Filipinos commended Camarines Sur Representative Leni Robredo, widow of former DILG Secretary Jesse Robredo, after a photo of her waiting for a bus to Naga City surfaced online. The viral picture, taken by Robredo's friend Keisha del Castillo and posted on the latter's Facebook page, was taken at Shell Magallanes Station.

9. The Juiciest Pinoy Celebrity Hookups and Breakups of 2014

It’s been an exciting year for showbiz, with engagements happening left and right, and pre-nup photoshoots peppering our news feeds. From public proposals to surprising splits, we round up some of the biggest showbiz headliners for 2014.

If you’re doing some last-minute Christmas shopping, we give you a handy list of Metro Manila malls’ operating hours during this holiday season.