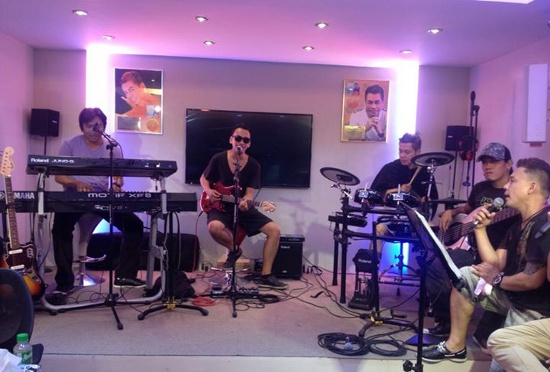 From New Bilibid Prison to New Bilibid Hotel to...New Bilibid Recording Studio. One of its inmates, Herbert "Ampang" Colangco, actually produced several music videos right inside his kubol in the penitentiary. That’s not all: Colango’s Kinabukasan album under Ivory Music earned gold and platinum status earlier this year, and he held a concert and charity show last April 27 in the studio.

Some of the songs were produced in the kubol that Justice Secretary Leila de Lima inspected on Monday.

One of only six Northern White rhinoceros has died, bringing the species closer to extinction, San Diego Zoo Safari Park officials said Monday. The remaining five northern white rhinos are an elderly female at the same park, one at a zoo in the Czech Republic, and three in Africa. According to the zoo, northern white rhinos have been nearly eliminated because of poaching in Africa, and sadly, none of them are reproductive.

Lawyer Renato Bondal, a former political opponent of Vice President Jejomar Binay, has filed graft and plunder charges against him and 30 others in connection with the allegedly overpriced Makati Science High School. Among those involved are current Makati City Mayor Erwin Jejomar "Junjun" Binay Jr., some former and current Makati officials, and 10 executives of Hilmarc’s Construction Corporation.

Bondal said the construction of the high school building was "implemented using the same modus operandi employed in the construction of the overpriced Makati Parking Building." He also urged the Ombudsman to preventively suspend the Vice President and other current Makati City government officials so as "not to tamper the evidence."

Despite rehabilitation efforts getting delayed by 45 days, Transportation Secretary Jun Abaya "expressed satisfaction" with the ongoing rehabilitation of Ninoy Aquino International Airport (NAIA) Terminal 1, saying, "This is a significant improvement from where we were coming from." Abaya added, "Being off by 45 days isn't bad for a billion-peso project."

Vicente Guerzon, assistant general manager for security and emergency services of the Manila International Airport Authority, said that as of December 16, project contractor DMCI had completed 40 percent of the work (which includes a more spacious passenger area).

The Philippine government has demanded custody of US Marine Joseph Scott Pemberton after serving an Olongapo City court warrant for the latter’s arrest on a murder charge in connection with the killing of Jennifer Laude. According to Assistant Secretary Charles Jose of the Department of Foreign Affairs (DFA), two letters have been sent to US Embassy officials: one transmitting the arrest order and the other requesting custody over him.

The US Embassy has yet to confirm the letters’ arrival.

Justice Secretary Leila de Lima on Tuesday threatened to file charges against officials of the New Bilibid Prison (NBP), after she and a raid team uncovered prohibited items inside the national penitentiary. De Lima said she would be issuing a show-cause order against NBP Superintendent Roberto Rabo, the commander of jail guards, and personnel. She also vowed to conduct a regular monitoring of the NBP.

Among the items seized during the raid were cash, flat-screen televisions, air-conditioning machines, liquor, designer shoes, and imported food.

7. Jessica Biel and Justin Timberlake are expecting a child

...at least according to former ’N Sync bandmate Joey Fatone who said, "He told me a while ago, and I kept my mouth shut but now I can talk about it!" The couple has been together for almost eight years, and married for two.

Instagram is giving you all the more reason to photograph and document your holiday season, adding five new filters to its roster. The app will allow users to manage their filters by "toggling or hiding the ones not frequently used." Users can now upload videos in slow motion, and see comments load in real-time. Say goodbye to constantly having to refresh!

From Todd English’s OMG Cake to Magnum’s Death by Chocolate, we found the most indulgent servings of rich, mouthwatering, and all-around satisfying chocolate goodies in Manila.

The holiday season is practically synonymous with the Metro Manila Film Festival (MMFF) which is (sadly) synonymous with films that make us cringe. It wasn’t always like that. We give you 10 classic MMFF entries that prove great films were and can still be made.