No classes in Manila on Friday, Cebu Pacific eyes flights to Italy, and more. 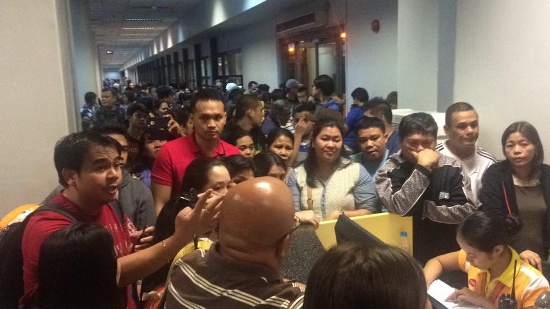 The House Committee on Transportation will conduct a hearing on Cebu Pacific Air and the chaos that occurred at Ninoy Aquino International Airport Terminal 3 over the holidays. "We will motu proprio call for a hearing to find out so that we will avoid this in the future, to find out what really happened, [and] why it caused inconvenience to thousands of commuters," said committee chairman Catanduanes Representative Cesar V. Sarmiento.

The December 23 and 24 incident left passengers complaining about flight cancellations, overbooking, and bad customer service. A total of 719 flights were delayed and 20 flights were canceled.

According to BKMG (Indonesia’s meteorological agency), weather was the "triggering factor" in the crash of AirAsia Flight 8501 a week ago. An initial report from the agency’s website suggests the weather at the time caused the crash, sending the plane and 162 passengers into the Java Sea. The report said the aircraft appeared to have flown into storm clouds, saying, "The most probable weather phenomenon was icing which can cause engine damage due to a cooling process. This is just one of the possibilities that occurred based on the analysis of existing meteorological data."

Justice Secretary Leila de Lima has ordered an investigation into the large sums of money confiscated from inmates who were transferred from the New Bilibid Prison (NBP) to the National Bureau of Investigation (NBI) jail. On Sunday, De Lima explained that the money-about P700,000 in P1,000 and P500 bills-was found hidden in garbage bins and toilet tanks in the prisoners’ quarters.

According to records from the Department of Health’s National Epidemiology Center, there were 492 new cases of human immunodeficiency virus (HIV) infections documented in November 2014, 134 of whom were aged 15 to 24 and "mostly infected through sexual contact."  The DOH said the 492 cases are 28 percent higher than the 384 cases recorded in November 2013.

Have you always wanted to see Italy but cringed at the ticket prices? Here’s some good news. Cebu Pacific Air is now seeking permission from the Civil Aeronautics Board (CAB) to fly to Italy, thanks to the unutilized seat entitlements previously allocated to national flag carrier Philippine Airlines (PAL). The European Commission has decided to remove the budget airline from the EU Safety List effectively allowing it to fly to the EU.

6. No classes and office work in Manila on Friday due to Black Nazarene Feast

There will be no classes in the City of Manila on Friday due to the Feast of the Black Nazarene, Manila Mayor Joseph Estrada announced Monday. The suspension will cover all public and private schools at all levels, as well as selected departments, offices, and bureaus in the city government. Estrada added, however, that the suspension of work in national government offices and private offices in the city "is left to the discretion of their heads of office."

7. Trillanes says there will be more allegations against VP Binay this year

Senator Grace Poe is seeking to review laws on indiscriminate firing as well as the implementation of stricter measures on firearm registration. This comes after several reports of stray bullet incidents, which include the death of an 11-year-old girl in Abra. "We will look into pending bills on increasing the penalty on indiscriminate firing, especially since violators are also men in uniform," she said.

Poe also vowed to look into measures on regulating the use of fireworks and firecrackers that are pending before the Senate.

It’s a new year, and what better way to make new memories than to watch your favorite artist live? The first half of 2015 is already full of musical events to look forward to. Whatever genre you’re into, we round up 15 of the most exciting concerts to see.

We asked JJ Yulo to give us his mouthwatering predictions for the new year, which include hotdogs from Pink’s, late-night dessert joints similar to Farmacy, and more.