P-Noy calls train fare hike critics "nagpapa-cute," tells them to give solutions + more things you might have missed today
Loading
Already a member? Log in
No account yet? Create Account
Spot.ph is your one-stop urban lifestyle guide to the best of Manila.

P-Noy calls train fare hike critics "nagpapa-cute," tells them to give solutions + more things you might have missed today 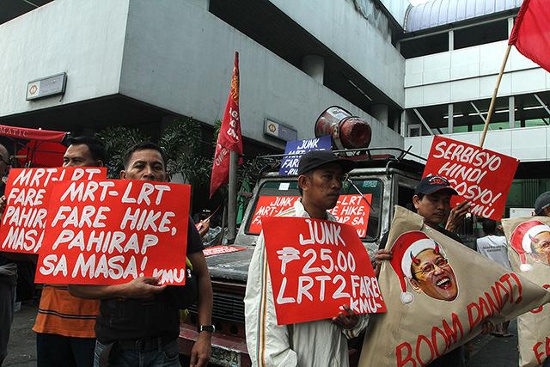 A devotee tasked to escort the Black Nazarene image has died after suffering from a heart attack on Friday morning. The incident happened an hour into the procession, around the vicinity of the Quirino Grandstand. It took some 15 minutes to finally extract the victim out of the carriage. "Hindi namin mahugot ng kasama sa ibabaw sa sobrang dami ng tao, tinakbo namin sa ambulansya," said a colleague. According to a medical bulletin from the Manila Doctors Hospital, the victim was dead on arrival.

The Department of Transportation and Communications (DOTC) is looking to build 11 additional railway lines in Metro Manila in the coming years to "address the congestion of traffic and improve the mass transport system." At the House Transportation Committee's hearing on the MRT and LRT fare hike, Transportation Undersecretary Rene Limcaoco said additional train lines will cut the average 2.5-hour travel time of commuters to Metro Manila’s business districts to an "hour or an hour and a half."

A "very satisfied" President Benigno Aquino III on Friday said he plans to appoint Health Undersecretary Janette Garin as the department's new chief, but clarified that this was subject to confirmation by the Commission on Appointments. Her appointment will be formalized after the Pope’s visit.

Manila Mayor Joseph Estrada has responded to Noli De Castro’s comment on the local government’s failed attempts to control vendors during the Black Nazarene. "Be a ’Hermano Mayor’ [of the Black Nazarene] first. Let him try," he said, adding that the city government has "done everything" to manage the vendors and that De Castro should "understand the situation of the informal sector."

The plan of the Metropolitan Manila Development Authority (MMDA) to have traffic enforcers wear adult diapers while on duty for the feast of the Black Nazarene and Pope Francis’ visit was met with criticism on Thursday. Television anchor Ted Failon, on his radio commentary program Failon Ngayon dared MMDA Chair Francis Tolentino to try and wear an adult diaper for eight hours straight before "forcing his traffic enforcers to do the same."

The MMDA was reported to have already spent P120,000 for the plan, which Failon pointed out could have been spent on renting more portalets.

7. Student fare discount on all public transport pushed in Senate

Senator Sonny Angara is pushing for a 20% fare discount for students on all public transportation utilities, including air, water, and rail transport systems. In a statement, he said, "I am appealing to our colleagues here in the Senate to pass our version so as to lessen the impact of current economic difficulties brought by the rising cost, not only of the LRT and MRT fares, but of basic commodities and education as well."

The House of Representatives, meanwhile, has already approved on third and final reading a counterpart version of the bill last November. At present, student discounts only apply to jeepneys and buses.

8. Manny Pacquiao will be a judge at this year’s Miss Universe

Manny Pacquiao will be joining the panel of judges at this year’s Miss Universe pageant, according to a statement by the organizers issued on Friday. He will be joined by former The Hills and Laguna Beach star Kristin Cavallari, reality show star Lisa Vanderpump, former People en Espanol’s "Sexiest Man Alive" Willy Levy, and fashion journalist Louise Roe.

Sometimes, three meals a day aren’t enough. Whether it’s the sit-down merienda or the grab-and-go variety, we can never say no to these familiar and comforting classics.

From 2nd’s legendary Bacon Chicharon to Zark’s Deep-Fried Bacon Burger (it’s a burger wrapped in bacon!), we round up a list of the most mouthwatering bacon dishes that are worth the extra trip to the gym.