"Homosexuality is not a sin," says CBCP President + more things you might have missed today 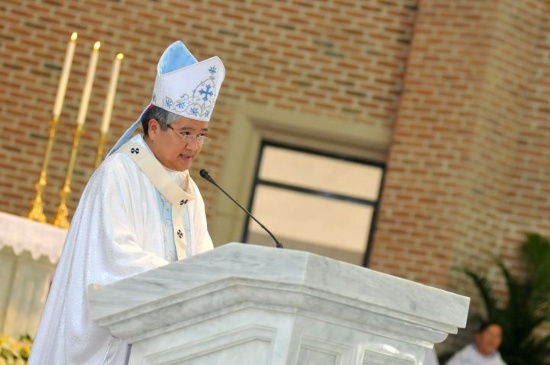 1. "Homosexuality is not a sin," says CBCP President

Archbishop Socrates Villegas, president of the Catholic Bishops' Conference of the Philippines, made some surprising statements in a forum hosted by The Philippine Daily Inquirer on Monday. He responded to a question whether Pope Francis condemned members of the lesbian, gay, bisexual, and transexual (LGBT) community, saying, "Being a homosexual is not a sin. It is a state of a person."

"The Pope says ’The Lord came to die for all, homosexuals and lesbians included.’ There is no one excluded from the saving plan of God," he continued. "God died for them also. God invites gays and the lesbians to go beyond their present situation and love Jesus."

Binay has been at the center of various allegations, including the overpriced construction of the Makati City Hall and owning a 350-hectare estate in Rosario, Batangas. The SWS poll was conducted from November 27 to December 1.

3. A second black box has been found in AirAsia wreckage

Divers have recovered the second black box from the AirAsia plane that crashed over two weeks ago, but have yet to free it from the plane debris under the sea. Suryadi Bambang Supriyadi, the operation coordinator at the National Search and Rescue Agency, says the cockpit’s voice recorder was found on Monday, just hours after officials announced the data flight recorder has been brought up to the surface.

According to the Philippine National Police (PNP), policemen assigned to areas in Pope Francis’ route won’t be wearing adult diapers. PNP Spokesman Chief Superintendent Wilben Mayor said there is "nothing in the agency's standard policies" that mandate policemen to wear adult diapers, even in situations where they need to be on their jobs full-time.

The Metro Manila Development Authority (MMDA) was earlier criticized when it asked its enforcers to wear adult diapers during the Black Nazarene feast.

5. Some mall-based DFA offices will be open on January 17

The Department of Foreign Affairs (DFA) has announced that some of its mall-based satellite offices will have consular services on January 17 (Saturday), namely the DFA offices in Robinsons Galleria, SM Megamall, Ali Mall, and Metro Gaisano Alabang. However, the DFA Aseana (Macapagal Boulevard) and DFA NCR-West (SM Manila) branches will be closed, due to its proximity to areas with activities related to the visit of Pope Francis.

The Land Transportation Franchising and Regulatory Board (LTFRB) has issued a 90-day provisional authority to a cooperative to operate 13 E-Jeeps set to go around routes between SM North EDSA and Katipunan Avenue via C-5. According to reports, the E-Jeep includes a reloadable card payment system called the GET pass, and each vehicle will have WiFi connection, a flatscreen TV, and a security camera.

According to Archbishop Socrates Villegas, Pope Francis’ visit to the country will focus on Yolanda victims and the scheduled events in Manila are "dispensable additions." The President of the CBCP explained, "The Manila event and the UST event are just add-ons. If we have to prioritize, UST can be removed, Luneta can be removed, but not Tacloban and Palo."

The Civil Aeronautics Board (CAB) has fined budget carrier Cebu Pacific a steep P52 million over the flight cancellations and delays during the Christmas holidays. The Civil Aviation Authority of the Philippines (CAAP) said they based the penalty on the number of affected passengers, which went up to over 10,000.

The decision was made by the government panel composed of the CAB, the CAAP, and the Manila International Airport Authority (MIAA).

It’s hard not to get excited about new movies when we get official and teaser trailers left and right. We list just some of the movies we’re dying to see, from blockbuster franchises to gems from acclaimed directors.

10. The Pope’s Guide to Metro Manila

In anticipation of Pope Francis’ visit to Metro Manila, SPOT.ph blogger Lourd de Veyra gives His Holiness a personal tour of the must-see sights around the city.