The Vatican advises no Pope banners, a tropical depression may intensify into a storm, and more. 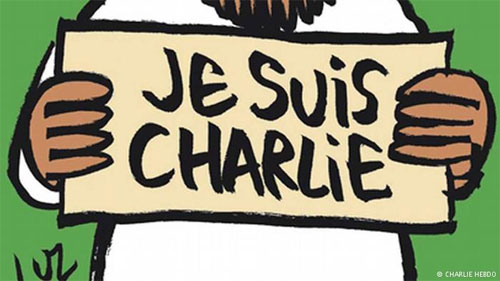 Satirical newspaper Charlie Hebdo has received new warnings and threats as the publication prepares to release a new issue with more cartoons of the Prophet Muhammad. The Dar al-Ifta, Egypt's top Islamic authority, called the most recent issue an "unjustified provocation" for millions of Muslims who "respect and love their prophet," while warning of the possibility of a new wave of hatred.

The latest issue features a cartoon of a tearful Muhammad bearing the slogan "Je suis Charlie" [I am Charlie] with a caption that says, "All is forgiven."

2. Vatican to PH: No banners of Pope

The Vatican has urged Filipinos to raise banners that bear the image of Jesus instead of Pope Francis. According to CBCP News, the Archdiocese of Palo in Leyte has received a set of instructions from the Vatican, pertaining to the Pope’s visit in the province on January 17. It might be an advisory that’s a bit too late, but it’s probably still worth listening to (especially in Manila).

Smart Communications will offer unlimited access to Twitter during the four-day visit of Pope Francis to the Philippines from January 15 to 19, saying that this would allow Filipinos "to get involved and immerse in the historic experience." All prepaid and postpaid users of Smart, Sun Cellular, and Talk ’N Text may access the Twitter app for free, as long as subscribers maintain a P1 balance or are subscribed to any plan, promo, or bundle.

4. Weather update: Tropical depression seen to land on papal visit may intensify into a storm

According to PAGASA, the tropical depression expected to enter the Philippine Area of Responsibility (PAR) may intensify into a tropical storm before Thursday morning. Once it enters PAR, the tropical depression will be called "Amang," which was last observed 1,560 kilometers east of Northern Mindanao. An earlier statement of PAGASA reported that the weather disturbance may coincide with Pope Francis’ visit to Leyte on Saturday.

160 new desktop computers and 171 passport readers were installed at the counters of the Ninoy Aquino International Airport terminals on Tuesday. According to the Bureau of Immigration (BI), the improvements were "fast-tracked" in order to "provide a more efficient and effective immigration service" for the new year.

After retrieving the two crucial black boxes from the AirAsia wreckage, divers are now investigating an object thought to be the plane’s jet fuselage. The jet’s main body, which could possibly be the resting place for victims, was spotted about two miles from where the plane’s tail was found. Search and rescue agency official S.B. Supriyadi cautioned, however, that its retrieval would be complex and could take several days.

7. Check out the official tracklist of Fifty Shades of Grey

It’s time to turn up the heat with Fifty Shades of Grey’s steamy soundtrack. The film’s first teaser featured a slower version of Beyonce’s "Crazy in Love" while tracks from Ellie Goulding and The Weeknd were later released. The full soundtrack will include more songs from The Weeknd and Beyonce, as well as Sia, The Rolling Stones, and even Frank Sinatra.

8. Chris Brown is allegedly willing to refund his talent fee

After Chris Brown failed to show up for the New Year’s Eve countdown event at the Philippine Arena, the R&B singer’s agency has said he is open to return his talent fee (around P44 million or $1 million). Brown's camp earlier told producers that the singer lost his passport a few hours before his scheduled flight to Manila.

Just so we’re clear, we’re not telling you to purchase these items. Instead, we’re showing you just some of the souvenir items and other merchandise commemorating the upcoming papal visit.

We all have the basics: a computer, a few pens, paper, maybe a notebook or two. It only differs with the clutter. Are you the proud owner of The Photo Album desk? Or do you have a Mananakawan desk?