She Dragon versus The Pontiff

(SPOT.ph) She wants to be clear, so in this post from January 16, Marlene Aguilar stated that she believes in God. However, her irreverence for religion has become quite glaring on her Facebook wall. The, uh, She Dragon (we’ll take her cue) has been steadily posting about demons...like Pope Francis: 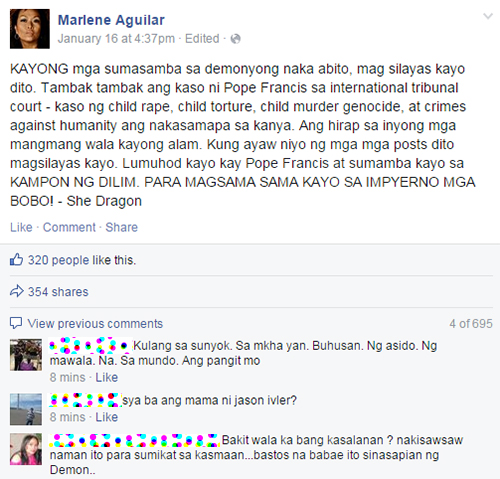 Despite a handful of people (a couple of hundred is a lot, but it’s not that much nowadays) calling her out for her...transgressions, Aguilar continued (rather, continues) to attack the Church and Pope Francis via her Facebook wall. This is in between photos of food (she ate a croissant) and calling bashers "morons" (plus variations thereof). On Sunday, she also posted copies of letters from the Cultural Center of the Philippines and the University of Rizal system, thanking her for her contributions.

The anti-Church rants cover a range of topics like child abuse accusations and references to the Catholic institution as "kampon ng dilim" with Pope Francis as "demonyong naka abito." We must state here that the links she has been sharing recently are unverified sources, not reputable titles who have openly criticized the Vatican as well as Pope Francis for relatively reasonable things.

It seems like troll bait but even Aguilar has adviced the "haters" to let it go. After all, it’s their reaction that caught ABS-CBN’s attention. We quote her again:

She also revealed the method to remaining unfazed by the brouhaha in the comments section: "When people call me all sorts of bad names, I don’t get insulted. Why? Because I know people’s judgement against me is not true."

She also challenged the Pope to an MMA Fight:

Incidentally, Pope Francis did remark that people who would say a swear word against his mother can expect a punch.

Marelen Aguilar Popefrancis Marlene Aguilar
Your Guide to Thriving in This Strange New World
Staying
In? What to watch, what to eat, and where to shop from home
OR
Heading
Out? What you need to know to stay safe when heading out