Philippine traffic is the 9th worst in the world, the MMDA collects 23 truckloads of trash after the Papal Visit, and more. 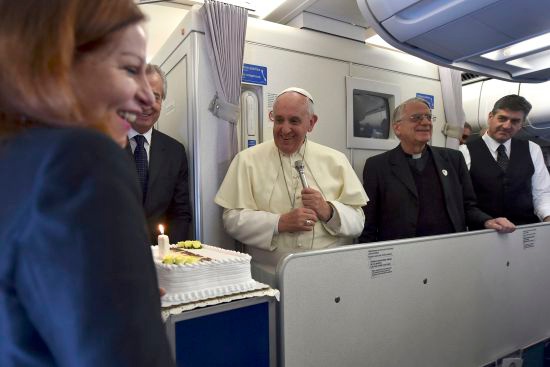 Even if Pope Francis still stands by the Church’s stand on artificial contraception, he doesn’t mean followers should bear too many children. "Some think, excuse me if I use the word, that in order to be good Catholics, we have to be like rabbits-but no," he said on Monday. He mentioned meeting a Filipino woman who risked her life to give birth to seven children, and revealed that he scolded her for her "irresponsibility."

2. French President Francois Hollande may be next to visit PH

After the Pope comes the French. President Francois Hollande is scheduled to visit the Philippines within the first half of 2015, and according to the French Embassy, will be concerned with climate change. His special envoy for the environment, Nicholas Hulot, is arriving for a five-day visit to make arrangements. Hulot is said to be scheduled to attend meetings with Foreign Affairs Secretary Albert del Rosario, Climate Change Commissioner Lucille Sering, and Senator Loren Legarda, who heads the Senate Committee on the Environment and Natural Resources. He will also be flying to provinces struck by Super Typhoon Yolanda.

According to the Metropolitan Manila Development Authority (MMDA), it has (so far) collected over 23 truckloads or 138 metric tons of garbage from areas included in the papal itinerary over the weekend. MMDA Metro Parkway Clearing Group head Francis Martinez said that 10 truckloads of trash were from Rizal Park where the Pope celebrated Mass on Sunday. He added that the trash collected consisted mostly of plastic bottles, styrofoam containers, candy wrappers, and barbeque sticks.

The cleanup is still ongoing and authorities estimate the haul to amount to 25 truckloads.

4. Philippine traffic said to be the ninth worst in the world

A 2015 report has ranked the Philippines as fourth among Asian countries and ninth in the world in terms of traffic. Kenya and Egypt top the list as Nos. 1 and 2, respectively. The report comes from Numbeo, a research website that compares traffic data from 88 countries based on average commuting time, commuting dissatisfaction, traffic inefficiencies and carbon dioxide emissions in commuting.

5. Senators react to P-Noy slamming clergy in front of Pope

Senator Joseph Victor "JV" Ejercito has reacted to President Benigno Aquino III's comments against some members of the local Catholic Church in front of Pope Francis last week.  "I think it was uncalled for. It was not the proper venue to blurt out his feelings toward the church leaders, as the Pope came to Malacañang as a state visitor," he said. "I wish he could have acted more statesman-like."

Senator Vicente "Tito" Sotto III, on the other hand, believed otherwise. "The President was merely exercising the freedom of speech. The same way that the clergy does when they criticize government," he said.

Apple enthusiast website AppleInsider has reported that Apple plans on launching an "interactive" stylus that will come with the Pro version of its 12.9-inch iPad tablet. An advanced version, they said, would even be able to support 3D handwriting.

7. Pacquiao gives Mayweather up to end of month to sign

Manny Pacquiao has given Floyd Mayweather until the end of January to agree to a fight scheduled on May 2. The boxer, who has already agreed to Mayweather’s terms and conditions, clarified that he would be forced to "move on" if the latter still refused.

8. Seth Rogen points out how American Sniper is kind of like Inglourious Basterds

...or more accurately, the fictional film that was shown in Inglourious Basterds. Seth Rogen’s tweet on Sunday sparked mixed reactions from Twitter users, after he made his observations on Clint Eastwood’s newest film, American Sniper. The fictional movie Nation’s Pride, featured in Inglourious Basterds, was a Nazi propaganda film that celebrated a sniper killing Allied soldiers.

9. 10 Songs for Your Workout Playlist

It’s practically a fact of life: Working out is easier (and more fun) when you do it with music. Nothing gets the energy going and the calories burning like a really good workout playlist to get you pumped. Here are our recommendations.

We’ve seen the steady rise of the humble pork buns, with noteworthy dishes popping up all over the metro. We took it upon ourselves to hunt down the best of these soft and savory interpretations of this Chinese dim sum favorite.