The Palace stands firm on RH law, Erap is still the mayor of Manila, and more. 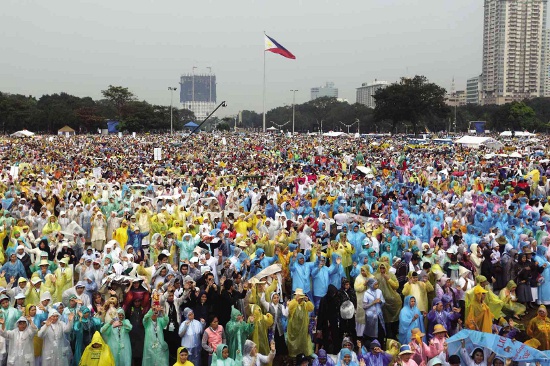 Fr. Hans Magdurulang, the priest who served as emcee at the Quirino Grandstand in Luneta last Sunday, has apologized for supposedly making a "variety show" out of the event. He admitted that he cried after reading the comments on social media, saying, "Ganito pala ma-bash" but clarified that he "reflected" on his actions.

2. SC decrees that Erap will remain as mayor

Looks like he’s staying. The Supreme Court (SC) has dismissed petitions seeking the disqualification of Manila Mayor Joseph Estrada from office. According to SC spokesman Theodore Te, the justices voted 11-3 in favor of junking the petition mainly due to the pardon given to Estrada in 2007 by then-President Gloria Macapagal-Arroyo. "The majority characterized the pardon extended by Mrs. Arroyo to Mr. Estrada as absolute, thereby restoring Mr. Estrada’s qualifications," he explained.

According to the Civil Aviation Authority of the Philippines (CAAP), the country is expected to improve its air traffic management after much-needed upgrades to its computerized air management system. CAAP said the new system, which can manage air traffic from as far as 250 nautical miles, will replace the current one (which has been in use since 1996). The upgrade, they said, costs P159.9 million.

5. Senate rejects Binay bid to get questions in advance

Senator Aquilino Pimentel III, chair of the Senate Blue Ribbon subcommittee, has rejected the request of Makati City officials for copies of questions that lawmakers may raise when the panel resumes its inquiry into alleged irregularities. "I am not aware of any right of a resource person, witness, or even a suspect in a hearing for accountability, which will give them the right to ask for advance questions, and if they're not given, refuse to appear," he said.

The subcommittee previously recommended that Makati Mayor Jejomar Erwin "Junjun" Binay Jr. and six others be cited for contempt for their failure to attend previous hearings.

Deputy Director General Leonardo Espina, PNP Deputy Director General, has ordered an investigation on the police unit that allegedly deprived its men a portion of their allowance while serving as security for the Papal visit. This comes after a police officer accused his superior, Chief Superintendent Manuel Felix, of pocketing the budget allotted for his officers' allowances. He claimed that they did not receive the full P2,400 allowance the government promised to the 25,000 PNP personnel deployed during Pope Francis' visit.

7. Erap has no plans to seek office

...for now, anyway. You might remember Erap’s earlier statements dismissing any plans to run in the upcoming elections, expressing his full confidence in Manila Vice Mayor Isko Moreno. On Wednesday, however, he said he might seek another term in 2016 if Moreno will run for another position, saying, "...I might change my mind and run for reelection again. And that is coming from my heart." He also stressed that he currently has no plans to seek higher office.

8. A photographer who used a drone during the Papal visit could face fine and prison

According to the Civil Aviation Authority of the Philippines (CAAP), the man who was arrested for flying a camera-mounted drone near a hotel a few blocks from where Pope Francis stayed in Manila could face a maximum fine of P500,000 for violating the "no-drone policy." Other than a hefty fine, the photographer could also face imprisonment if proven guilty.

9. 10 Girly Life Hacks That Will Make Your Life Easier

From double-duty products to ingenious solutions to life’s annoying little problems, we’ve found a few simple tricks that will make things a lot easier. Think removing foundations stains and even conditioner that doubles as shaving cream!

Sometimes, there’s no better or easier pick-me-up than a feel-good movie. You don’t have to look very far to find a movie that will put a smile on your face. We’ve got our own fair share of the fun, upbeat, and hilarious-guaranteed to leave you feeling a little happier.