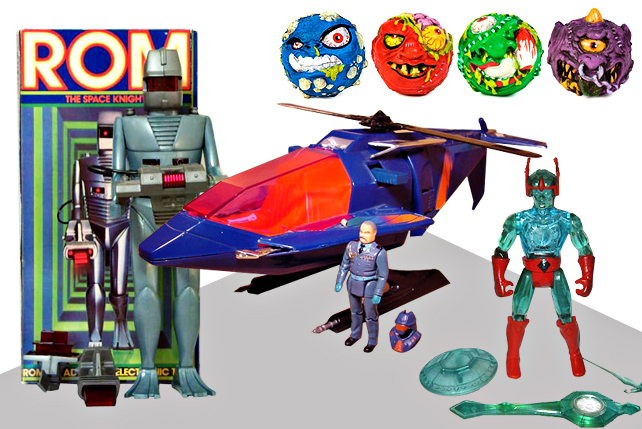 10 Toys That Should Have Movies 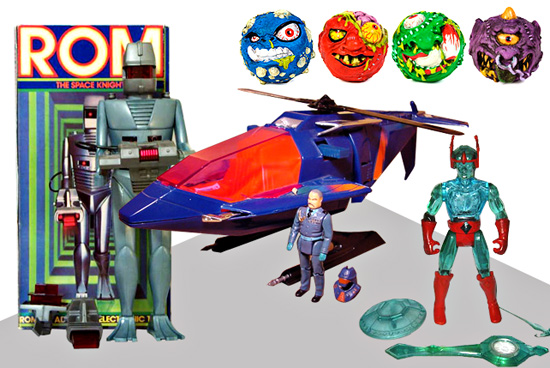 (SPOT.ph) While superhero flicks have been rolling out of the movie factory floor year in, year out, outside of Transformers and G.I. Joe, Hollywood can't seem to figure out the toy-to-movie formula. He-Man and Thundercats have been in development for decades. While these properties have box office potential, they could flop terribly if done wrong. Maybe they should look to these obscure toy properties, which have a lot of big-screen promise and zero-to-minimal number of fans to piss off. Plus we suggest who should star and helm these flicks!

Set in the near future, three peacekeepers wearing high tech exoskeletons battle evil cyborgs. Conceptualized and designed by comic book legends Jack Kirby and Gil Kane, the action figures had holes in their suits where they could be outfitted with weapons and armor to make them look like sleek vehicles. Cast hot actors Chris Pine, Channing Tatum, and Anthony Mackie as hotshot pilot Ace McCloud, soldier Jake Rockwell, and navy seal Max Ray, respectively, for some cool camaraderie and get Jon Favreau to helm, a director who's already got experience with metal men and this could be a winner. The original tagline, "Man and Machine. Power Extreme!" is so cool that it's worth reusing.

Advanced cyborg warriors from the Microverse use Earth as their secret battleground, utilizing their miniature size to pretend they are toys. They had fun character designs (enemy Baron Karza was a proto Darth Vader) and gimmicks such as full articulation, magnets for interchangeability, and glow-in-the-dark parts. Setting all those visceral Michael Bay-directed action scenes in the original Transformers (c'mon, it's okay to admit that the first flick was good) in someone's living room would be a visual thrill for any kid who's always wanted to see their action figures come to life. The movie would be humorous with an epic feel to it, which is why the Kung Fu Panda movies team would be an excellent fit.

Another group of armored crime-fighters, the difference here is they use inconspicuous vehicles that possess hidden advanced weaponry. Granted, the sports car that flies using its doors as wings is lame, but the rest of the other vehicles and the way they conceal their weaponry looked cool. There's a huge cast of heroes to select from but it's best to focus on M.A.S.K. leader Matt Trakker and his betrayal by frenemy Miles Mayhem who steals the M.A.S.K. tech. Matt Damon (Trakker) and Ben Affleck (Mayhem) would be a fun choice so we can see the best buds at each other's throats. And have director Justin Lin shoot it so it becomes a Fast and the Furious-style movie with even more SFX!

Here's a variation on a theme: armored scientist heroes with the aid of subterranean races fighting giant underground monsters. While the hero designs weren't that great, the Kaiju-like monsters looked amazing, one of the creatures, D'Compose is a giant zombie with a dinosaur-skull for a head and a ribcage that can be used to imprison the good guys. With stories about corporate espionage and corrupt politicians, the ’80s cartoon was more complex than Pacific Rim and would make a great basis for the script. With a resume filled with morally ambiguous stories about monsters such as Cloverfield and Dawn of the Planet of the Apes, director Matt Reeves could turn this into a giant monster movie with a brain.

What started as a failed attempt to launch a new toy franchise in the late ’70s became a successful Marvel comic book in the 80s. In the comics, Rom's appeal was in his design and the premise of a cyborg hunting for aliens disguised as humans gave the series creative mileage. Giant robots may be a dime a dozen in the cinema now, but it's Rom's heartfelt quest to end the war so he can become human again that touches the right chords. Proving he could do excellent voice and motion capture work in the The Adventures of Tintin, producers should grab Daniel Craig for the lead and contact Brad Bird to shoot it since he knows his way around robots and superheroes.

Here's a case of a property that started out as a Marvel comic and was spun off into a toy line. A sword and sorcery fantasy about crystal knights battling lava warriors, this could appeal to the Lord of the Rings crowd missing their fantasy fix now that The Hobbit trilogy has ended. Motion capture films are par for the course and even though he's returned to live-action shooting, there's this sense that director Robert Zemeckis is chomping at the bit to finally do a successful motion capture movie to rival James Cameron's Avatar. For lead roles, up-and-comer Charlie Hunnam (Pacific Rim) can play the titular character with Andy Serkis as Moltar, his volcanic nemesis (Serkis is golden in these roles).

Set in a post-apocalyptic future where solar flares threaten the Earth, mankind decides to go into hibernation, safeguarded by giant intelligent robots. But one robot decides to erase man's existence from memory and enslave the rest for fear that the humans will deactivate them once they awaken. Everything changes when a group of bots uncovers a human skull. It's heavy stuff for a kid's toy line, but it would be cool for these robots to take center stage by choosing big name actors for the voices like Hugh Jackman, Angelina Jolie, and Benedict Cumberbatch and pick Shawn Levy, based on his rock and sock 'em robot work on Real Steel as the director.

In a distant world, an advanced race turns to magic when electricity has failed; two opposing orders of knights gain weapons and armor with magical properties. Similar to He-Man and Masters of the Universe, there's a cool fusion of science fiction and fantasy here with knights driving military vehicles powered by magic. While the Thor movies come close to this mix of magic and science premise, this flick that would have the potential to push the concept further.  Neil Marshall should direct (he did the action intensive episodes of Game of Thrones) and get fantasy vets Richard Madden and Richard Armitage to play the opposing lead roles to drawn in the Dungeons and Dragons market.

A group of humans escape back in time to the age of dinosaurs only for their oppressors to follow suit. They arm the dinosaurs with heavy artillery to fight their war (didn't these guys ever hear of the Butterfly Effect?). Imagine the pitch that movie execs would be throwing at their studio bosses: It's G.I. Joe meets Jurassic Park! What's cooler than dinosaurs? Dinosaurs armed with missiles! Audiences would take this movie seriously with Bradley Cooper in the lead (the dude needs a giant blockbuster to cement his street cred) and Andrew Stanton in the director's chair (a brilliant director who needs to redeem himself for the box office flop that was John Carter).

They're rubber balls made to look like disgusting monster heads filled with booger and popping eyeballs! Yes, there was a time toys didn't take themselves so seriously. Make it a family-friendly live-action flick directed by the Farrelly Brothers of Dumb and Dumber fame, insert lots of toilet humor and gross-out gags into the script and fill it up with voice talent made up of comedians like Adam Sandler, Seth Rogen, Jonah Hill, Jack Black, Kristen Wiig, and Melissa McCarthy to ensure it becomes a sure-fire comedy hit.