Adventure Time is coming to theaters, Solenn wants a castle wedding, and more. 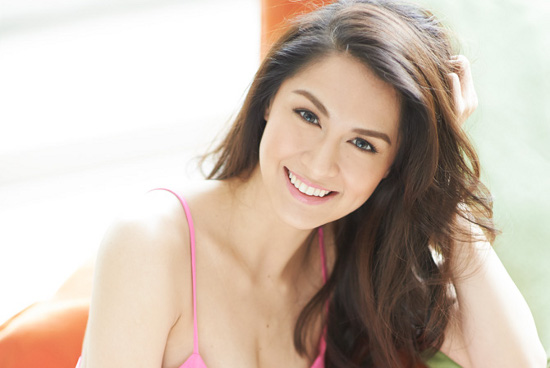 1. Marian Rivera to star in a lesbian-themed primetime show

Marian Rivera is returning to your TV screens, this time topbilling an LGBT-themed teleserye. Following GMA 7’s critically acclaimed My Husband’s Lover comes The Richman’s Daughter, which centers around Jade, a "beautiful woman who is in love with another equally wonderful woman." The Primetime Queen is set to star alongside Luis Alandy and Glaiza de Castro.

2. Adventure Time is coming to the big screen

Oh my glob, here’s some mathematical news for fans of Adventure Time! Your favorite characters from the hit cartoon series are finally headed to the big screen. The movie is set to be produced by Chris McKay, one of the producers of The LEGO Movie.

3. Ikea has managed to turn furniture into...

...wireless chargers! The global furniture store’s new collection will use wireless technology to charge devices that are placed on or near the furniture. Say goodbye to tangled wires and cables.

Solenn Heusaff and her fiance Nico Bolzico are planning a castle wedding in France, where the former grew up. She said the location is perfect, because France geographically is between the Philippines and Argentina, making it easier for their loved ones to attend. The two are set to tie the knot some time in 2017 or 2018.

On Monday, Senator Sonny Angara said the Senate was ready to tackle the proposed granting of a "special" tax exemption for boxing champion Manny Pacquiao. Once the bill is filed, he explained, a hearing will then be conducted. He also praised Senator Koko Pimentel’s proposal, saying, "Palagay ko kulang tayo sa pagkilala sa kanyang kontribusyon."

Senator Grace Poe on Monday requested that Transportation Secretary Joseph Emilio Abaya submit within five days a progress report on the Metro Rail Transit (MRT) rehabilitation. "Our commuters have long been aggrieved, and any further delay in the accomplishment of vowed upkeep and upgrade is certainly unacceptable," she said.

7. Bong Revilla wants to visit his son in the hospital

Detained Senator Bong Revilla is expected to ask the Sandiganbayan to allow him to visit his son, Cavite Vice-Governor Jolo Revilla in the hospital. The latter has been confined at the intensive care unit at the Asian Hospital and Medical Center for accidentally shooting himself while cleaning a handgun.

8. Osmeña criticizes a "hard-headed" Aquino for "refusing to apologize"

On Sunday, Senator Sergio Osmeña III blasted President Benigno Aquino III for "refusing to apologize for any part he played" in the Mamasapano operation. "...It will be messy, pero this president has been super hard-headed and he only listens sa mga kaibigan niya, so hindi naman maganda ’yong ganoon. In that sense his management has been pretty ’jeer-y’," he said.

9. The SPOT.ph Guide to Sinag Maynila

As if you needed more reason to head to the theaters, Sinag Maynila is the newest film festival to hit theaters in Manila. We give you a run-down of the must-see, thought-provoking films you can catch from March 18 to 24.

There are certain things that make a house distinctly Filipino. From the ever-reliable tabo to the plastic wrap on furniture, we round up some things you probably have in your own home.