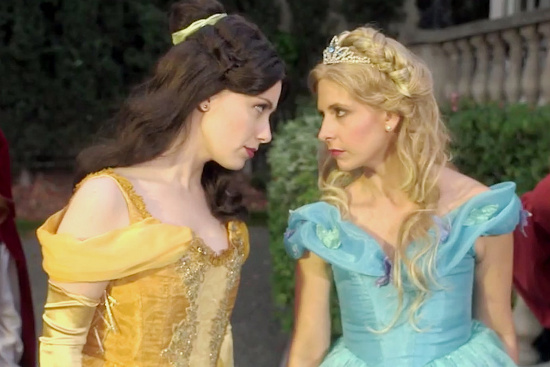 1. Watch a rap battle between Belle and Cinderella

If you haven’t seen Cinderella in theaters yet, this should (sort of) tide you over. YouTube performer Whitney Avalon and actress Sarah Michelle Gellar teamed up for the latest edition of Avalon's Princess Rap Battle video series as Cinderella and Belle, respectively. The result is pretty hilarious.

The two fashion designers behind Dolce & Gabbana have earned the ire of some celebrities after stating that gay adoption was "unnatural" and children born via in-vitro fertilization are "synthetic children." The likes of Elton John, Courtney Love, and Glee creator Ryan Murphy all took to social media to "boycott" the brand and its products.

After three tries, Pia Wurtzbach, a 25-year-old model and makeup artist, finally went home with the Binibining Pilipinas-Universe title after the Grand Coronation Night on Sunday. Former domestic helper Janicel Lubina, meanwhile, was crowned Binibining Pilipinas-International, with the Best in Swimsuit and Best in Long Gown awards also under her belt.

Tennis star and boxing fan Andy Murray has placed his bet on Floyd Mayweather, saying that the upcoming May 2 bout would be "tough for [Manny] Pacquiao to win." He added that Mayweather had the "home-crowd" and a "superb defense" advantage.

According to the Philippine Atmospheric, Geophysical and Astronomical Services Administration (PAGASA), provinces in Eastern Luzon may experience stormy weather on Thursday if the cyclone "Bavi" (international name) enters the Philippine Area of Responsibility. It will be the second typhoon to hit the country this year.

Makati City Vice Mayor Romulo Peña was sworn in as the acting city mayor on Monday morning after the suspension order on incumbent Mayor Junjun Binay was served. Mayor Binay has since "barricaded himself" inside the city hall, with his supporters camped outside.

According to Justice Secretary Leila de Lima, the Department of Justice (DOJ) is not authorized to determine whether or not President Benigno Aquino III can be held criminally liable for the Mamasapano operation. Her statement comes after she earlier criticized the Philippine National Police’s report on the clash for saying the President "is part of the chain of command" and is criminally liable for his involvement. She also said that P-Noy, as president, is "immune" from suits.

A new campaign from the Department of Tourism (DOT) is promising a "VIP tour without the VIP cost." Under the Islands Philippines Fun Caravans, a tourist could join one of eight motor caravans and enjoy "VIP treatment," such as vehicles with security escorts and a choice of activities and accommodations at multiple provincial destinations. The caravans launched this year, and tourists can join for as little as P13,000.

Looking to add some fun and personality into your home decor? The owl may be the favored decorative animal, but we’re here to show you that other creatures in the animal kingdom also exist...and they’d fit just as perfectly in your home, too.

10. 15 Things You Should Know Before You Graduate

It’s mid-March, which means it’s graduation season. Whether you’re excited to finally leave school behind, or you’re dreading the eventual job search, we give you some advice from folks who’ve been there. Oh, and congratulations!