We might have lower income tax rates by June, human feces contains gold worth millions, and more. 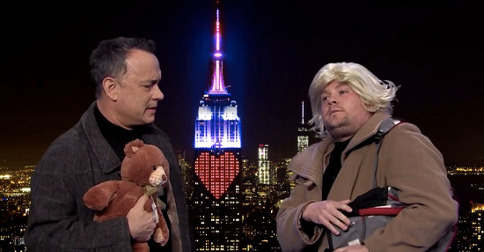 1. Watch Tom Hanks act out all his movies in eight minutes

If you’ve always wanted to see all of Tom Hanks’ movies but just never had the time, you’re in luck. Tom Hanks stopped by the Late Late Show to recreate his films, from Castaway to Sleepless in Seattle and Toy Story...in just eight minutes.

Agents Mulder and Scully are returning to TV, but here’s the catch: They’re back for only six episodes. Stars David Duchovny and Gillian Anderson will reprise their roles, and the show is set to air this year.

3. That Thing Called Tadhana opens in 31 US theaters

Antoinette Jadaone’s hit movie That Thing Called Tadhana will be screened in 31 theaters in the US starting Friday (March 27). Jadaone described her film as "more than 10 years' worth of love stories, heartaches, heartbreaks, bitterness and acceptance."

4. Watch the full trailer of the Toni Gonzaga and Coco Martin-starrer You’re My Boss

Star Cinema has finally released a full-length trailer for the upcoming rom-com You’re My Boss from Tadhana director Antoinette Jadaone. The story revolves around a strict boss and her assistant who somehow end up switching roles. The movie hits cinemas April 4.

Experts say that human feces contains gold and other precious metals that could be worth hundreds of millions of dollars. You read that right. Kathleen Smith of the U.S. Geological Survey (USGS) and her team have discovered metals such as platinum, silver, and gold in treated waste. The only trick now is how to extract it...and would you?

While delivering a speech at the Maynilad Leadership Talk in UP Diliman on Wednesday, Senator Miriam Defensor-Santiago endorsed businessman (and Maynilad chair) Manny V. Pangilinan for president, saying, "It is people like him, who should be elected to positions of leadership." When asked about her own plans to run for presidency, she responded, "Well, just because it is an option for me doesn't mean I have to close all options."

A comprehensive tax reform measure lowering the income tax rates is expected to be passed before June 11, said Deputy Majority Leader and Valenzuela City Representative Magtanggol Gunigundo Wednesday. The bill proposes to lower individual and corporate income tax rates to 15% from 32% and 30%, respectively.

9. 10 Guys on Tinder You Need to Stay Away From

Whether you’re looking for a one-night stand, a long-term relationship, or something else, Tinder is the way to go. You just need to wade through a couple of, er, questionable guys before meeting The One.

We searched the metro for the best nail salons that redefine the phrase, "pamper yourself." From gel nails to indulgent nail spa packages, we’ve got you covered.