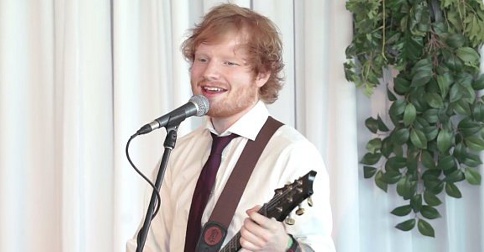 1. Watch Ed Sheeran surprise a couple at their wedding

How awesome would it be to have Ed Sheeran sing at your wedding? This lucky couple got the surprise of a lifetime when he appeared to perform "Thinking Out Loud" for their first dance. The appearance was part of an Australian radio station’s prize for the newlyweds, who also won an all-expense-paid wedding.

2. Zayn Malik says he is working on solo music

In the first interview since leaving One Direction, Zayn Malik said he is currently working on new music with producer Naughty Boy, the man behind Sam Smith’s award-winning debut album. He also discussed his decision to leave the boy band, saying, "I did try to do something that I wasn't happy doing for a while, for the sake of maybe other people's happiness." He clarified, however, that there were no riffs between him and the rest of the group, adding, "I think they’re going to be cool."

On Friday, Robin Padilla took to Instagram to appeal to Rey Pamaran, saying, "Sir, it will be very good for everybody, especially to the young men of sports/bodybuilding and law school, if the both of you will set an example of practicing the code of chivalry." He also cited Mendez’s age and added, "Naniniwala po ako na kayong dalawa ay marangal na tao at hindi umaatras sa laban, ngunit nagpakumbaba na po si Melissa at humingi na ng paumanhin at patawad."

A report by 24 Oras said Thursday that the three Bar topnotchers said they "want to serve in public offices because they are needed there more." Third placer Sandra Magalang said, "Public school education ako from Grade 1 until law school, so it wouldn’t be strange for me to give back, or to devote my talents to public service." Meanwhile, Christian Drilon said that he would not be following in his uncle (and Senate President) Frank Drilon’s political footsteps, adding that he would want to serve in the judiciary.

On Friday, the Sandiganbayan junked the motion of Senator Bong Revilla to leave his detention cell in order to attend his daughter’s graduation. The court said that while it previously granted Revilla’s furlough plea for "medical reasons and humanitarian considerations," this time cannot be considered an "exceptional circumstance."

One of the black boxes of the Germanwings Airbus A320 Flight 9525, which crashed in the French Alps, was recovered late Thursday night (Manila time). The retrieved voice recorder revealed that the pilot was trying to go back inside the cockpit after co-pilot Andreas Lubitz locked him out. The pilot pounding at the door can be heard and moments before the crash, the screams of the passengers can be heard. Authorities are now investigating Lubitz’s mental health and any other leads that would give him motive to crash the plane deliberately.

7. Heart Evangelista is completely fine with her parents’ absence during her wedding

In an interview with PEP.ph, Evangelista cleared the air and said that despite the fact that they chose not to attend her wedding, she harbors no ill feelings against her parents. The actress said that she cares more about the fact that they’re communicating well. Asked if grandchildren might help bridge the gap between her husband and her folks, she answered, "Baka mas lalong mabigla."

8. Manila doing something right: Illegally parked cars get the clamp!

The local government unit of Manila is strictly enforcing their "No Parking Policy" and punishing offenders by clamping cars and having them towed. But wait, there’s more! Violators of the ordinance also need to pay P900. We don’t know why anyone would complain about this. Seems like a good idea!

Get that belly in your belly! Here’s our updated list of the best liempo in the city. Tell us if you disagree with our list, because we’d love to eat even more great pork belly! Buh-bye, beach body.

It’s not a go-to place for hanging out yet, but maybe that’s all about to change. Kopi Roti is getting a new look and they’re offering a new line of burgers. Check it out.