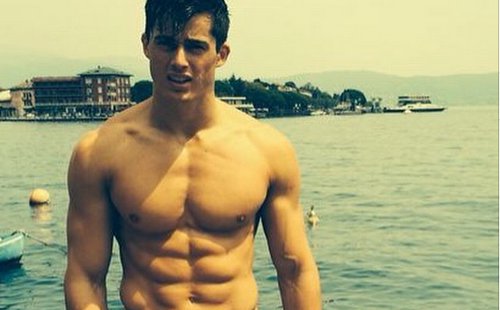 1. Meet this math teacher who is also a male model

Maybe if your math teacher looked like this, you’d pay more attention. A lecturer at University College London (UCL) named Pietro Boselli also happens to be a male model on the side. (We’re not kidding, there’s a video.) Oh, and if you needed more reason to crush hard on the guy, his Instagram says he has a PhD in engineering.

2. Hugh Jackman hints at "one last time" as Wolverine

According to a recent post on Hugh Jackman’s Instagram account, an untitled Wolverine project slated for 2017 may be his last turn as the X-Men character. His post was captioned, "WOLVERINE ...ONE LAST TIME. HJ." He was last seen in X-Men: Days of Future Past in 2014, but there’s no word on whether he will appear in the upcoming 2016 installment of the franchise.

3. Taylor Swift wins Artist of the Year at the iHeartRadio Awards

Taylor Swift was the biggest winner at the second annual iHeartRadio Awards, taking home trophies for Artist of the Year, Song of the Year for "Shake It Off," and Best Lyrics for "Blank Space." Meanwhile, Justin Timberlake was recognized with the iHeartRadio Innovator Award, while Sam Smith won for Best New Artist.

4. Lamberto V. Avellana’s A Portrait of the Artist as Filipino to get digital restoration

Digital restoration of Lamberto V. Avellana’s 1965 classic film A Portrait of the Artist as Filipino is underway, spearheaded by filmmaker Mike de Leon (whose late father produced the film). De Leon considers the restoration a "landmark cultural event" because three National Artists worked on the film: It was adapted from a play by Nick Joaquin, then directed by Lamberto Avellana, and starred Daisy Hontiveros-Avellana.

The Bureau of Internal Revenue (BIR) has released a list of individual taxpayers in 2013, and Manny Pacquiao has topped the list with about P163.8 million. Other celebrities in the list include Piolo Pascual at No. 14 with P42.53 million, John Lloyd Cruz at No. 15 with P41.97 million, and Kris Aquino at 16th place with P40.48 million in paid taxes.

6. The Clueless Girl’s Guide To Cocktails

Looking to hit the bar with your girlfriends? Cosmo.ph gives you the lowdown on the different cocktails you’ll likely find in any bar’s extensive menu. While you’re at it, check out these 10 must-try local wines and liqueurs so you can pair those gourmet drinks with a scrumptious meal or two.

7. Gloria Arroyo says she "would not wish hospital detention on her enemies"

Buhay Partylist Representative Lito Atienza told reporters on Sunday that former president and now Pampanga Representative Gloria Macapagal-Arroyo would not wish detention on her "enemies and critics." Quoting Arroyo, he said, ’"I don't even want to joke about it because I don't want any of them to suffer the same sad, tragic and painful experience I have-which I'm still experiencing. I hope and pray no one will replace me here.’"

A magnitude-7.7 earthquake that hit Papua New Guinea on Monday has prompted officials of the U.S. Geological Survey to issue a tsunami warning for countries in the Pacific, including the Philippines. The Pacific Tsunami Warning Center said "hazardous" tsunami waves could hit coasts located within 1,000 kilometers of Kokopo, Papua New Guinea.

What happens when there are two mayors running a city? The situation in Makati is so ridiculous that we wouldn’t be surprised if someone made a movie out of it...like The Legal Mayor.

10. 20 Telltale Signs You're Becoming a Tita

Just so we’re clear, we mean sudden signs of aging, which includes a low tolerance of loud music (good-bye, clubbing) and you have no idea what EDM is.