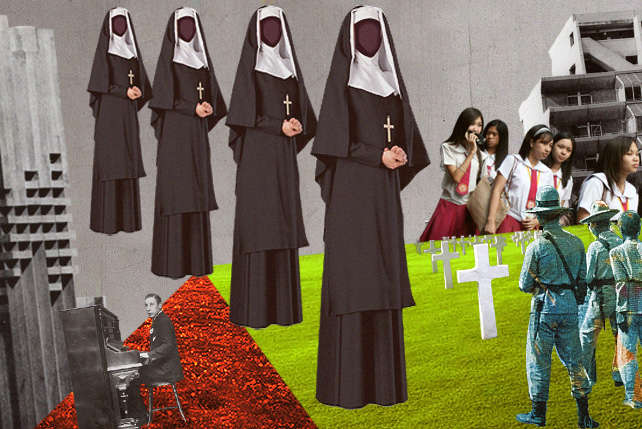 Do you remember a haunted tree or a resident white lady? Yep, so do we. 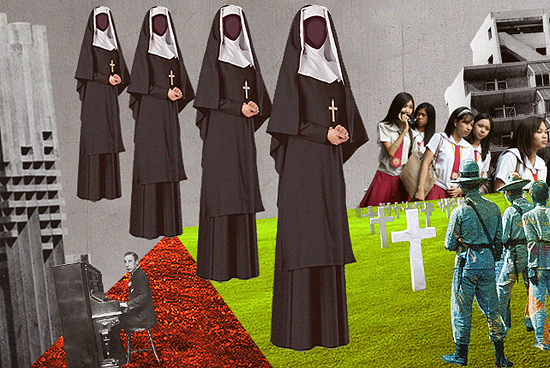 (SPOT.ph) There are quite a few things to miss about school: summer vacations, your friends, and of course...all those ghosts. Whether these spooky stories were actually true or not, those strange encounters taught us to never (ever) go to the bathrooms by ourselves, and always steer clear of any nuns we didn’t recognize. Admit it, you still get the chills when you talk about them at every class reunion.

Here are 10 of the most common ghost stories we all talked about at school. Share yours in the comments section!

Your school used to be a cemetery.

Your friends probably told you that because there were so many casualties during the war (who cares which one), the ground you stood on had many dead bodies lying underneath. It was especially believable if your school stood right beside a convent (where all those ghostly nuns or singing priests probably came from). You were always scared to step on anything that could be only a few feet away from a coffin (or a corpse!) and made it a habit to make the sign of the cross when you happened to be anywhere near some large trees, for fear of disturbing the spirits.

There’s a faceless nun who needs your help.

We’re not sure why there aren’t as many stories of wandering priests, but for whatever reason, creepy nuns were a staple of many campus urban legends. She was known to haunt bathrooms or float quietly along the hallways. Her ghost appeared when you were all alone in the bathroom, and for that split second when you looked away from the mirror, she wrote on the mirror: "Pray for me, I’m in hell."

The girls’ bathroom is haunted.

Remember Moaning Myrtle? We had our own versions even before Harry Potter came along. There are many tales of ghostly sightings in bathrooms, which perhaps stems from the fear of being caught at the most awkward moments. It wasn’t unlikely that while you were busy doing your business, a certain "someone" would knock on the door: You’d see her shoes from inside the cubicle, as if patiently waiting for her turn. But when you look up it’s actually a freakishly tall lady staring back at you. Some bathrooms have been known to be so haunted that they’re locked up for good, while some have had the mirrors taken down or faucets blocked to put an end to all these petrifying encounters.

There’s someone other than your teachers in the faculty room.

Yep, students weren’t the only ones pranking their teachers. Spirits were felt lurking in the faculty room, pulling teachers' chairs, or opening and closing doors unexpectedly. It was also likely that you heard these stories from one or two teachers who had a third eye...that one teacher who just stopped in the middle of a lecture because she just had to check if that boy in the back was a student or a ghost.

Don’t stay too long around the guard house or waiting shed...

Because there was probably a security guard who met a tragic end or got brutally murdered on school grounds. Other variations of the tale replace the security guard with a janitor who died alone during night shift. Perhaps they just wouldn’t go away because they were still busy attending to our needs?

Spirits live in nature. And in your school grotto or park grounds.

We all had that one, creepy tree (or more than one) that we stayed away from—maybe because an ate of a friend of your cousin once said that a student hung herself there. Or a dead body was left inside the tree. Other times, you always remembered to say "tabi tabi po" lest you accidentally step on a dwende’s house or nuno sa punso. You also made sure to bite your finger if you pointed anywhere possibly haunted, in case you got cursed by the spirits.

There’s a priest haunting the chapel.

Perhaps this story was also related to the idea that your school was once the resting place of those who died during the war. These are the restless souls of murdered priests who have stayed behind and remain in places that are most familiar to them. If their spirits weren’t felt in the chapel as you were praying, they might be heard singing in the early hours of the morning, or hovering over the circle during reflection at a school retreat.

Every classroom had something extra...an extra student, that is. Whether it was a little boy or little girl, that spirit would rearrange the chairs or make computers go wonky to scare the wits out of you and your classmates. Then there are those doppelganger stories: That kid who showed up during roll call, so that when the teacher counted 46 instead of the usual 45...you knew something was up. Other stories include ghostly figures showing up in class photos, a strange, fuzzy figure standing right behind one of your unsuspecting classmates.

There are scary ladies out to get you.

There was always the story of a white lady waiting for you at the end of a dark hallway, or perhaps just hanging out in one of the many trees on school grounds. The more dark places or trees you had in school, the more chances you’d run into her. You and your friends might have also tried to summon Bloody Mary by chanting in front of a bathroom mirror to call on the evil spirits.

Spirits are known to lurk in places that are always empty, which explains a lot if you didn’t use the library every day (shame on you for not using your library card!). Did you hear the one about a girl who felt she was being followed by a ghost so she started reciting The Lord's Prayer? Then when she went back to her desk, the ghost was in front of her reciting The Lord's Prayer, too. And then there was the one about the auditorium or music room, which had all instruments up for grabs. All you could do was pretend that the piano tune you were hearing was from a mobile phone...even if no one was around.

Nostalgia Scarystories Campus Ghosts
Your Guide to Thriving in This Strange New World
Staying
In? What to watch, what to eat, and where to shop from home
OR
Heading
Out? What you need to know to stay safe when heading out