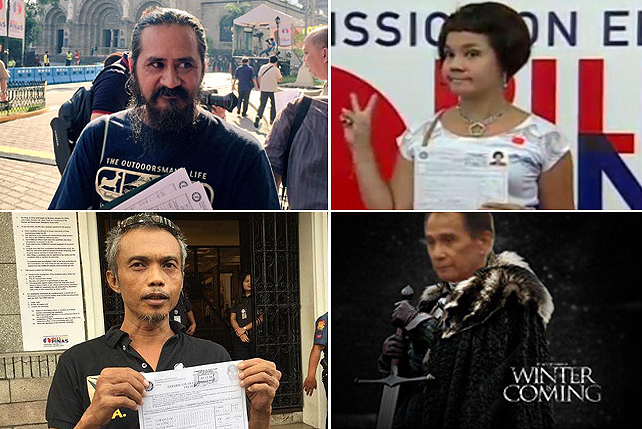 10 Mind-Boggling Presidential Hopefuls for the 2016 Elections

Wi-Fi for all and a chance to meet aliens! 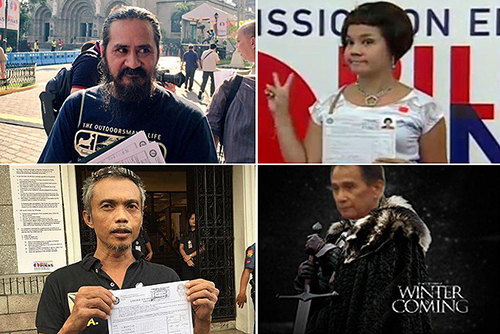 (SPOT.ph) The nation has been quite entertained by the week-long filing for the Certificates of Candidacy (COC) for the 2016 national elections, which started on October 12. As of writing, there are already more than 50 aspirants for the highest seat in Philippine government. It seems like this year's roster of hopefuls have everything figured out to lead the country—from those who have claimed that they're really just ordinary citizens, to those who say they've come from outer space.

We've narrowed down 10 hopefuls with promising platforms for our nation (or for the whole universe). And by promising we mean they're really quite fascinating!

Reyes told reporters on October 12 that he wants to legalize the four seasons (yes, that's winter, spring, summer, and fall) in the Philippines “so that we can get rid of the rainy and dry season.” He also aims to lead “an exodus to the promised land of tomorrow,” and wants to sponsor free burial for all. We're voting for him because we'd rather have snow than this terrible heat over the holidays.

Allan Carreon of the "Intergalactic Earth Ambassadors" filed for his COC on October 13. He claims to have been able to communicate with ''aliens'' through the Internet and mind telepathy. He had us at "Wi-Fi for all."

32-year old Fernando Fortez says he is the “voice for the youth generation.” The voice of the youth sounds squeaky.

Pushing for a “divine government” is 75-year old Alfredo Tindugan. Together with his running mate, Angelito Baluga (a security guard), he stated that divine government is rooted on “righteous leadership.”

73-year-old Benjamin Rivera from Tondo claims to be a consultant and says he wants to eradicate corruption through “adjustable government.” He brought a wrench when he filed for his COC to tighten the “cabinet.” His rendition of Power of Love is everything.

A 34-year old tricycle driver from Iba, Zambales wants to change the lives of all tricycle drivers in the country and also promised to close beer houses. Wait, is that his real name?

38-year old Sel Hope Kang asked reporters to help her when she filed her COC on October 11. She's an Economics graduate of the University of the Philippines. Someone hold her bag, please.

A fashion designer from University of Santo Tomas seeks for “home improvement” should she be elected as president. However, 39-year old Jean-Pierre Pardo did not answer questions from the media.

You might know him better as Archangel Lucifer. He claims to be chosen by his “master” to lead the country. He's possibly a Dothraki.

Also read: On the Spot: BAYAW for President

2016 Elections 2016 Elections Ph Certificate Of Candidacy Coc Eleksyon2016 Funny Halalan2016 President
Your Guide to Thriving in This Strange New World
Staying
In? What to watch, what to eat, and where to shop from home
OR
Heading
Out? What you need to know to stay safe when heading out